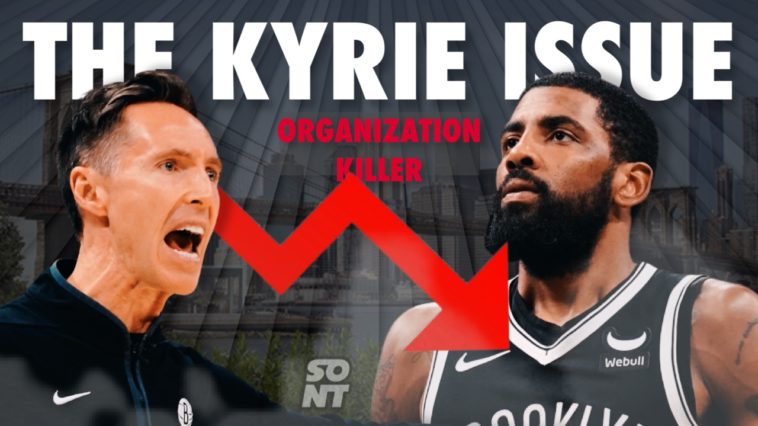 Kyrie Irving’s career is vanishing before our eyes. Minute by minute, every single day. Despite having one of the greatest NBA Finals shots in history… Just 6 years ago…

Kyrie Irving is an issue. He is the main issue, for every team that he is on.

He is once again an issue with the Brooklyn Nets, as he is now suspended, the team has under preformed and head coach Steve Nash was just fired.

Now, this video not a political opinion, it’s not a free speech conversation, it’s simply breaking down why Kyrie Irving has been and still is a huge issue. .. But it would not be fair to first explain what is happening to Kyrie Irving right now.

For those that didn’t know, let me quickly explain why Kyrie is suspended by the Nets & NBA for a MINIMUM of 5 games… and why Nike, yes the company that makes his signature shoes, their top seller, how now halted production of the Kyrie 8s and put a hold on their relationship.

The Nets suspended guard Kyrie Irving indefinitely Thursday, calling him “unfit to be associated” with the team because he had declined to say he has no antisemitic views in the week since he posted a link on Twitter to a film with hateful claims about Jewish people.

“Such failure to disavow antisemitism when given a clear opportunity to do so is deeply disturbing, is against the values of our organization, and constitutes conduct detrimental to the team,” the Nets said in a statement.

The Nets said Irving would be suspended without pay for a minimum of five games and “until he satisfies a series of objective remedial measures that address the harmful impact of his conduct.”

On Thursday, before he was suspended, Irving did not apologize for his post but said there were some things in the film he did not agree with.

“I didn’t mean to cause any harm,” Irving said after a Nets practice. “I’m not the one that made the documentary.”

Last week, Irving posted a link on Twitter to the film “Hebrews to Negroes: Wake Up Black America,” which is driven by antisemitic tropes about Jewish people lying about their origins.

Simply, he clearly does not want to apologize. Well, there you go, he will probably be suspended for more than 5 games and now Nike has dropped him.

All I will say is, sometimes in life you need to be more aware of what you’re say, whether or not YOU think it’s bad… You might be hurting someone, especially as a public figure.

I am not here to agree or disagree with Kyrie Irving, the Nets decisions, the NBA or Nike… I was planning a video about Kyrie Irving when Nets head coach Steve Nash got fired, before all this Kyrie stuff happened… But it might just further the point I was going to make.

Kyrie was part of the greatest comeback in NBA Finals history, Kyrie and LeBron James led the Cleveland Cavaliers back from a 3-1 deficit against the 73-9 Golden State Warriors. The team with the greatest record of all time, and the Cavs were the first team in NBA Finals history to come back from down 3-1. Kyrie hit THE SHOT too, the shot that ended it all. This one, you all know it.

BUT the sample size is now VERY VERY Clear. Kyrie Irving without LeBron James in his life has never been a winner, and it gets proven more and more everyday.

Before LeBron went back to Cleveland to join a young Kyrie Irving he has never gotten the team to a winning record, with 33 wins being the most… & Kyrie Irving’s attempt to prove his own superstar merits outside the orbit of LeBron James has failed miserably.

He’s been a disaster at every post-Cleveland stop. He screwed up the Celtics, who were a conference finals team before him and a Finals team after him. I would say Irving’s super-team Brooklyn venture with Kevin Durant and James Harden did a  nosedived, but the truth is it never really got off the ground.

Irving played 20 games his first season in Brooklyn. He took a literal vacation in the middle of his second season. He refused to get a vaccine shot in his third season and played 29 games. Over that span, the Nets got swept in the first round twice. They won a total of seven playoffs games. Like I said, disaster.

Even other players in the NBA like Draymond Green has made the point of Kyrie being an awful leader without LeBron .

“With LeBron, if you give him someone like Kyrie … they’ll have a chance because of the way Kyrie can score the basketball,” Green said in a recent interview with Bloomberg. “LeBron will only put him in position to do that. Kyrie has not proven to be a great leader. LeBron will put an umbrella over that. If you can do what you’re good at, you have LeBron leading.”

On top of that all, it seems like every time someone coaches Kyrie, they will lost their job. Now after the Nets fired Steve Nash , Kyrie is going into his 12th season with his 3rd team and now his 9th head coach… He is almost averaging a coach per year.

If I am being honest, I think Steve Nash is happier than ever to be fired from the dumpster fire going on in Brooklyn… This was never going to work.. Because… you guessed it, Kyrie is there. Kyrie Irving is the same guy that said, “I dont really see us having a head coach” when asked about the Steve Nash hiring in 2020… This guy is a disaster.

Outside of his suspension now over anti-semitic comments, and the anti vaccine situation last year. He also has been known to claim the world is flat, and that dinosaurs aren’t real. He even once reportedly didn’t talk to anyone on the Cleveland Cavalier for 3 weeks during a playoff run. Not a single teammate.

Well, it doesn’t seem like he took his own advice.

Say what you want about his comments, his thoughts, his beliefs, thats not what I am here to do…

Simply, he is a great scorer, and ball-handler in the NBA… BUT he is a coach killer, a plague to his teammates and organization, and overall someone who destroys every franchise he ends up on…

So let’s see… Will anyone else give him a shot?! I don’t think so. This is the Antonio Brown situation of the NBA…