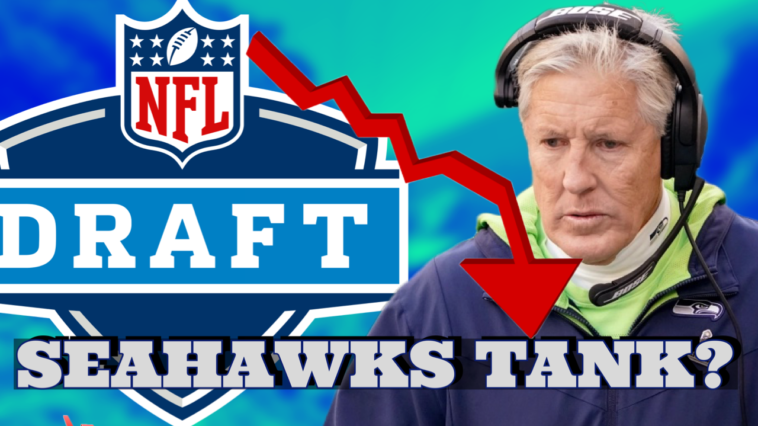 The Seattle Seahawks take a pretty bad loss to the Atlanta Falcons and the season is looking bleak right now as the Seahawks fall to 1-2. Not only is it a loss, the Falcons were 0-2 and so the Seahawks lost to a pretty bad football team… This is tough…

The Seattle Seahawks are 1-2 but not all hope is lost despite a horrid game but many think this might be a tank season, George & Sami, our two brother founders, were on ‘Sports ON Tap Seattle‘ to discuss whats going on in the Seahawks world.

This is a transcription of the podcast, so please excuse the typos and mishaps in grammar. If you want to listen to the full podcast you can find it on all platforms here:

Last but not least, you can always watch clips from the podcast on our YouTube! Enjoy!

Dont forget our all sports podcast

Let’s talk about the Seattle Seahawks tanking season, right? Is this a tank season or is it not a tank season and that’s for the fans, right? Like that’s more for the fans. Cause we know the players, the coaching staff. No, one’s losing games on purpose, right? I mean, that’s not physically possible, but as a fan, right?

Mm-hmm and who will probably get frustrated eventually, even if he just gets stats, but we’re losing a lot of games and Tyler lock, he might not be vocal about it, but he might get frustrated cuz he’s used to winning games. Going to playoff games, and competing. So I don’t know, you know, obviously how it’s gonna all play out if they do lose 10, 11, 12 games.

But I do know that if I had to pick between missing the playoffs by three games or just losing. 14 games. I pick losing 14 games. Give me Bryce young, give me CJ Stroud, STR however you say it. Yeah and let’s let the rest of these guys develop this year and that’s, and it sounds so pessimistic because we just came off a shitty loss, but the Falcons, it, it probably tells you, it tells us a little, at least enough to know this.

Team’s not gonna compete at a high level. Yeah. I mean, and I’m not gonna disagree with you here cause I see where you’re coming from. But here’s my, my problem with that mindset, cuz I think if we win two, three games, we have a huge and much bigger problem than just a quarterback. Right? I think the problem is here.

If we go seven and 10, I feel like we might be one or two pieces away in tweaking things away. That’s what scares me about three and 14 and two and 15 and four and 13. Right? That means you’re far away. You’re not a one or two draft picks away. You’re not a couple pieces away. When we saw the, Philadelphia Eagles last year were 10 and seven, I believe.

And went to the playoffs. I’m not saying we’re gonna go to 10 and seven, but then they had three first round draft picks. And they were able to go get a wide receiver by trading. One of those draft picks drafted two other guys. They had a bunch of second round picks. They retooled and they looked like they might be the class of the NFC.

I’m not saying that’s where we are, but that’s what just worries me about if we’re a three and 14 team is like, are we two, three years away? Cuz I think I don’t want to be two, three years away. Yeah. We’re two years. I mean, my other thought is you gotta look at teams. Like, I don’t know the Jacksonville Jaguars now.

Right? Mm-hmm, they looked awful last year, but urban Myer was a shit show, but they got Trevor Lawrence they’re number one pick. They got another one, another number one pick last year, two years in a row. And now they start off the year. What two and one, and they’re beating teams like the charging.

They’re looking very competent. They look like they probably team. That’s a great point. That’s a very. But that’s now look, if we could get Trevor Lawrence, I would be like, he’s, you know, the best prospect. I mean, I would be all for Dan. Okay. Yes. But that’s that, that’s not how it always works. Right. I know.

I know. And, and Trevor Lawrence might not become the next Aaron. It might never win to super bowl. It might not. There might be Bryce young, like, you know, these whole prospect, like the best prospects, this guy, blah, blah. It’s not always how it works out. The best quarterbacks in our history, like of our lifetime right now were like Peyton Manning, Aaron pay Manning was yes.

The best prospect. And then you had Aaron Rogers who was like mid tier draft dropped. Yeah. And Tom Brady and Tom Brady, six round pick. So, and pat also middle of a draft 10th one pick. And you know,  just to go off that point there real quick, , I actually do like what you said a little bit here. I’m gonna just use an example of a three and O team right now.

And that’s in Miami dolphins, right? Tua, who was at quarterback last year and the year before. I mean, he got benched multiple times. People didn’t know if he’s the future. All of a sudden you get a, you rebuild that team for one or two years, you use your draft picks wisely, you go get a weapon or two and you get the right head coach, which I think we do have the right head coach.

I know a lot of people get upset at Pete, but he’s proven he can do it before. I don’t know if he’s gonna stay along. Stay long enough to do it again, but you get a couple things and all of a sudden you can turn it around quick. So yeah, sometimes it, it, you know, good draft capital is what matters. Yeah.

And one thing that we gotta understand, and now Russell Wilson defenders, don’t not get angry at this comment. I’ve had it with Twitter and the people on Twitter who get upset when we root against stress. Let me just one more time. Explain. I D know how I feel the last couple years. Let me explain. No, no, it’s not about that.

the more games you lose, the better pick you get. So if, is there a lottery system like that page says, no, you told me to act, act like these guys.

None of that stuff. You should be rooting for him to lose every single game this year. Because even if the Seahawks or let’s just say the Seahawks are bad and we get a, the sixth pick in the draft. If we also have the fifth or sixth pick of the draft from the Broncos. The Seahawks might have a turnaround potential in a year to a year and a half with good speed.

So this is why I think, especially like the Seahawks, future’s not so bleak, right? Like they have two draft picks potentially. That could be really good. So unfortunately I hate to say this. It’s about to start soon. I’d rarely ever say this, but go 49. I know, and I mean, a lot of people might be like, but no, you’re right.

You know, as they say, I guess the best way to say it is his misfortune is our reward.