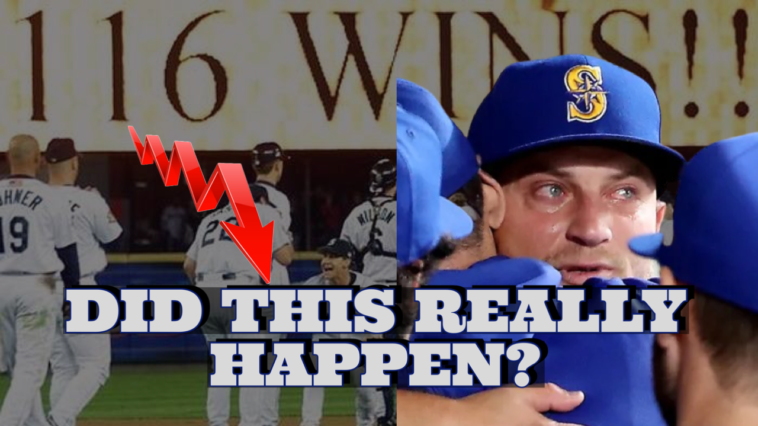 The Seattle Mariners‘ 2001 season was the 25th since the franchise’s inception. The Mariners finished with a 116–46 (. 716) record, tying the major league record for wins set by the 1906 Chicago Cubs, and setting the record for wins by an American League team.

This is a transcription of the video and podcast for those who are impaired audibly. Please excuse all typos and grammar issues.

Our founders, two brothers, Sami & George, started this new series, ‘did this really happen’? Watch the full video on our YouTube:

This Comes From ‘Sports ON Tap Seattle Podcast’

Did This Really Happen?

And that joins , you know, it’s pretty crazy. The national basketball association warriors hold the record of 73 wins did not win the championship and football. The Patriots, , were undefeated. In the regular season with 16 wins, that’s more than the dolphins, 14 than O season. They have also lost a championship and they.

They have also, they lost, they lost the championship, the championship. Yeah, the championship. And then the Seattle Mariners hold the record for most wins in major league baseball season. And also did not win. Now. I don’t know enough about hockey to tell you if the regular season hockey not true did or not, but the three most major sports in, in America have had their highest.

Regular season win total team. All not win championships. It’s pretty crazy. If you think about it, , no matter how good a team is. During a regular season, sometimes in my opinion, it makes it harder to win in the post season. There’s certain things I feel in sports where you need ups and downs throughout a season, or a couple losses you didn’t expect and kind of fight through those in the regular season, not in the postseason, cuz when it happens in the season, all of a sudden you’re eliminated and it’s pretty.

To, to think 2001, the best record of all time, you had the rookie of the year who also won MVP in each rose Suzuki, which I don’t know if that’s ever happened other than that year. MVP. Not, not quite sure. I’d have to look at that. Probably not in the past 1950s, first one ever to do that from Japan. Ooh, obviously, thank you.

It probably the first time, not in the 19 hundreds, early 19 hundreds that somebody won MVP and rookie of the year, the team broke the record for 116 wins. Didn’t win the world series. And obviously that adds to the Seattle Mariners, being the only team in history of baseball to never even. Make a world series.

And I think it’s important to mention it is the longest drought in all four major sports. In America right now. I mean, I think the next closest, the Sacramento Kings in the NBA at 16, but mm-hmm 21 years. I, I personally to give some personality in this video. Or in this podcast, whenever you’re listening this on I’m I was in first grade, the last time the Mariners, , made the playoffs.

I have a couple gray hairs now, and that was in seventh grade and I had a mustache then, and I have a mustache. Now things don’t change, but it did really happen, George. And it’s been 21 years, but hopefully the, hopefully some of that magic comes back at the end of this season. I really do hope so.