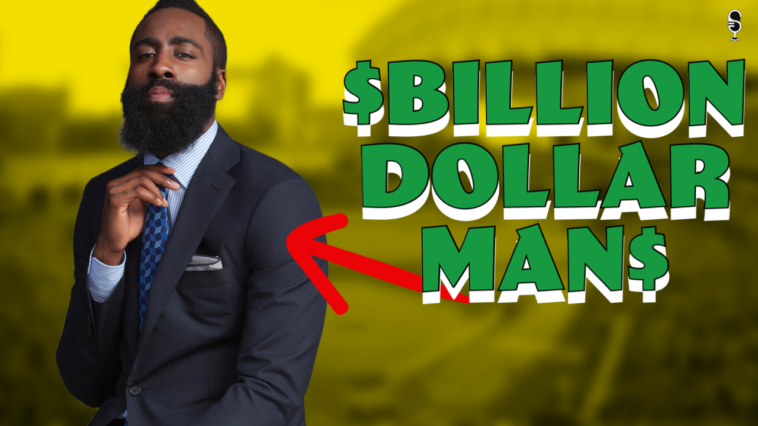 Billionaire James Harden. The $10 million dollar beard. What I am getting to here? Well, you’ll see. Billionaire is probably not the first word that comes to mind when you think about NBA star and former MVP, James Harden. Maybe when you hear the names LeBron James or Michael Jordan you would think of the word ‘billionaire,’ but not for the Beard.

Well, you would technically be right, because he is not a billionaire like those other NBA stars. But Harden could become a billionaire one day, and thats something that not every athlete can say.

With $268 million made in career NBA earnings, a huge Adidas deal, and a business move that has returned 40x for him, James Harden is on the right path.

Let’s break down some of his best business and invest moves.

Obviously this all starts with his ability on the basketball court. If it wasn’t for that talent, he might not be anywhere near where he is today.

In his 942 career games, James Harden played for the OKC Thunder, Houston Rockets, Brooklyn Nets and now Philadelphia 76ers. He has a career average of 22PPG 7.7RPG and 10.3 APG. He is a 10 time all star, 7-time all-nab player, 3 time NBA scoring champion, and he’s won both a 6th man of the year award and an MVP award in 2018.

This stellar NBA career is what makes these investments possible. He is currently the 9th highest paid athlete in the world. His current deal is a 2-year $68 million dollar deal with the 76ers.

There is one thing that really makes all his endorsements extremely special… THE BEARD. He didn’t always have this beard. Look back at those highlights from when he was at Arizona State University, or even the earlier days in Oklahoma City. But now, his beard is the money maker.

It is actually estimated that shaving his beard would cost him nearly $10 million dollars a year. The beard has staying power.

Currently, Harden makes roughly $19 million dollars a year from endorsements. Those endorsements come from a wide range of business. GoPuff (a food delivery company), Spotify the music and podcast app, Amazon, EA Sports video games, State Farm Insurance, and BodyArmor.. aka a competitor of Gatorade. BodyArmor is a big part of his current success story, so stay tuned for that story.

So far, he are his 4 best investments.

Art of Sport: Harden teamed up with the body and skincare company that you might see on the shelves all the time as AOS. This was co-founded by the late great Kobe Bryant and is currently worth around $25 million.

Next, the James Harden soccer investment. In 2019, James Harden bought a $15 million dollar stake in the MLS Houston Dynamo and the Women’s team Houston Dash. When he purchased this stake they were both valued together at $280 million dollars. Just last year in 2021, Ted Deal purchased both team for $400 million. As Harden cashed in on some earnings, he also held onto SOME of his initial stake in the teams with the new ownership group.

Last but not least, another invest he made with Kobe Bryant, is the investing that has and will help his net worth reach near a billion. Body Armor. BodyArmor is another sports hydration drink that is here to stay and compete with Gatorade and Powerade. Kobe Bryant, Naomi Osaka, Andrew Luck, and Rob Gronkowski are other notable athletes who invested in early.

It is reported that Harden had more than a 4000% gain in his investment. Thats a lot, to say the least.

He is not stopping there, he has now also invested in Saks, 13 Endeavors, Pura Scents, and Autograph.

The Beard is not only great for basketball, but he’s a business man.