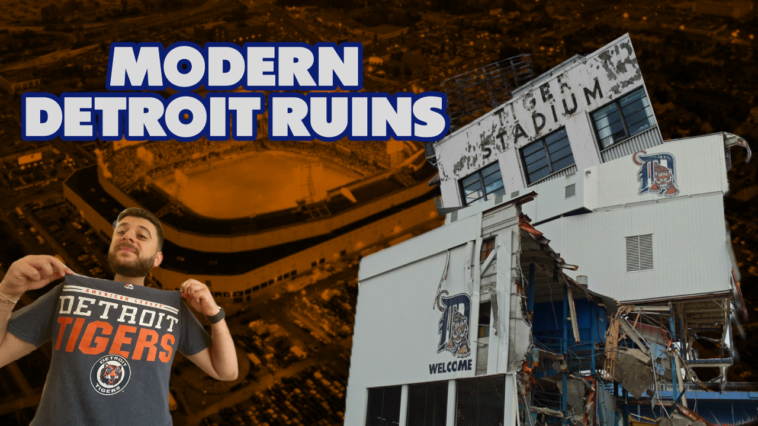 Tiger Stadium, previously known as Navin Field and Briggs Stadium, was known as “The Corner” for its location at the intention of Michigan and Trumbull Avenues.

What happened to the former Tiger Stadium in Detroit? What’s on that land now? Well, you’re going to learn of all that.

But first, what makes a good stadium? Well, that answer can vary, but a good stadium can make or break a sporting event. Now, a lot of people love to see new stadiums, which are beautiful on the eye, but I prefer an old stadium with history. Which is why sometimes seeing an abandoned stadium hurts my soul.

Unfortunately, at the turn of the century, the former Tiger Stadium — a beloved Detroit area landmark — fell from grace. The Detroit Tigers were founded in 1901, making the franchise one of the earliest existing teams in MLB history.

In 1912, the Detroit Tigers played their home opener at Navin Field in the Corktown neighborhood of Detroit.

But the Detroit Lions of the NFL also called Tiger Stadium home for 34 years from 1938 to 1974, and they even hosted two NFL Championship Games there in 1953 and 1957. Yes, basically the Super Bowl before the Super Bowl got its name in 1967.

There are 2 other notable events that happened at Tiger Stadium that must be mentioned for sports fans, before I get back to Baseball.

In 1939, boxer Joe Louis defended his world heavyweight title with an 11th round knockout of Bob Pastor.

Anyways, back to baseball. The Tigers have a rich history and have won 4 World Series in their history, all 4 of them came during their time at this stadium. Winning in 1935, 45. 68. And 84.

& it was the stadium where New York Yankees legend Lou Gehrig famously benched himself during what would be the final game of his career due to ALS disease, which is now known as Lou Gehrig Disease as well. That not only ended his career but a streak of 2.130 consecutive games played.

On top of it all, on July 18th of 1921, Babe Ruth, yes THE Babe Ruth hit what is believed to be the longest home run in MLB history. The ball clear the stadium in center field and landed in the street. The estimated distance has been listed at 575 Feet.

Unfortunately, by the mid-1990s, Tiger Stadium had grown outdated, so the team began constructing a new stadium in 1997… The Tigers played their final game there 2 years later in 1999 before moving over to Comerica Park in 2000.

After years of effort to persevere the stadium, the city rejected the plans and Tiger Stadium was demolished over a years span. The demolition was finale in 2009.

But wait, there’s actually a happy ending to this story.

The original field remains where the stadium once stood.

During the summer of 2010, a group calling itself “The Navin Field Grounds Crew” began maintaining the playing field and hosting vintage baseball, youth baseball, and softball games at the site. There was at one time also a sign on the enclosing fence labeling the site “Ernie Harwell Park”.

On December 16, 2014, a $33 million project to redevelop the old Tiger Stadium site was approved by Detroit’s Development Corporation.

Along Trumbull Avenue, 24 town homes were planned for sale. Detroit’s Police Athletic League (PAL) headquarters would relocate to the site and maintain the field. PAL would build its new headquarters and related facilities on the western and northern edges of the site while preserving the historic playing field for youth sports, including high school and college baseball.

Construction of the project began in June 2016.

In 2018, the Corner Ballpark opened at the site. So thankfully, the historic site still remains, and the love of Tiger Stadium in Detroit can still be visited.