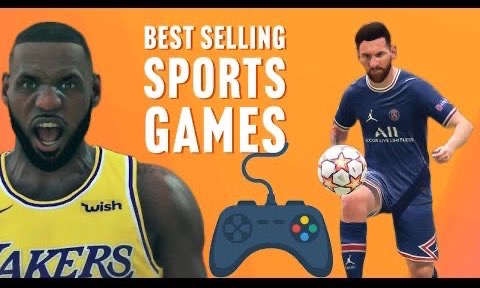 Every year there is excitement about who is the next cover athlete of the top selling sports video games in the world.

Games like NBA2K, Madden & FIFA always rock a star of their leagues on the cover. This year we have Devin Booker going on NBA 2K23. Mbappe on FIFA 22 & the late great John Madden rightfully so makes the cover of Madden 23. Rest in Paradise to the legend himself.

If you’re like me, you always wonder which games are the most popular of all time. So I’m going to break them down.

Lets start with an honorable mention before going into the Top 5:

Tony Hawks Pro Skater Series: This game franchise has sold over 31 million copies since it’s release & generated $1.4 Billion dollars in revenue. Tony Hawk actually almost went bankrupt at some point, he wasn’t generating major sponsors, or major prize money. He eventually raised enough money to start hiss skate company, Birdhouse and made it out of financial trouble. But it gets even better with the game franchise.

Activision, the company that ran Tony Hawks skating game, famously tried to buy out Tony Hawk with a $500,000 payment instead of paying him royalty fees. He declined and now gets paid around $6 million per year in royalties from the video game franchise. What a save by the skate goat.

Tony hawk is forever a legend.

At number 5 comes NBA Live by EA Sports. This means they are the 5th best selling sports video game franchise ever. EA Sports actually with own 3 out of the 5 top spots.

NBA Live used to be the game. Before the 2K world took over. In the 90s and early 2000s, kids used to prefer NBA Live over any NBA game. But that obviously changed over time. Which tells you NBA2K will be on this list.

NBA Live has a total of 35 million copies sold over with 23 editions in this existence. All starting with NBA LIVE 1995 that came out for the MS-DOS, Genesis and the Super NES.

For context: NBA Live 19 was considered a pretty good game, but the franchise sold around the same amount of games as the Nintendo Switch edition of NBA 2K19. Which isn’t a great things to put it lightly.

I still think of NBA Live when it comes to basketball games but 2K is clearly the go to these days.

At number 4: I didn’t even know this game to be honest with y’all but this is clearly a game that did and does well.

Pro Evolution Soccer (PES) was the main competitor to EA Sports’ FIFA. They had Lionel Messi as the game’s exclusive cover athlete from 2009-2011, and it was intended to be a more realistic, slower, smoother, and more strategy-based game flow—compared to FIFA’s faster arcade-style gameplay.

They shockingly have sold more than 100 million copies over two decades.

The total is roughly 112 million copies sold over 21 editions since the first came out in 2001 for the PlayStation 2.

The game is still being produced today, and the mobile edition of eFootball has 500 million downloads since 2017.

FIFA is clearly still their main competitor that they can’t keep up with, the same struggles NBA Live deals when it comes to NBA 2K.

At number 3 is a game you knew was coming to the list. 2K Sports owned, NBA 2K franchise.

Clearly Take-Two made the right call.

The first edition came out in 1999 for Dreamcast and has sold 123 million copies over 27 editions.

An interesting stat is that about 2.3 million people play NBA 2k daily. That seems like an abnormally large number. But given the fact that the NBA is a global game, it does make a lot of sense. NBA 2K is huge in the world of YouTube, twitch and many different media outlets.

At number 2, the best American football game ever, without question: Madden.

Madden NFL is also owned by EA Sports of course and has dominated the American football market since the late 1980s.

After being turned down by Joe Montana because he had a deal with Atari, EA Sports convinced John Madden to put his name on the game and released the first edition in 1988.

Since 1988 there has been 130 million copies sold over 42 editions. With the first game being John Madden Football in 1988 for the Commodore 64/Commodore 128, Apple II, and MS-DOS.

It’s estimated that the Madden video game series has done $4 billion in sales, and EA makes about $600 million annually from the game today. But it wasn’t always smooth sailing—the first game took SEVEN YEARS of revisions before it was finally released.

Why? Because EA wanted it to be 7-on-7 football, but John Madden didn’t think that was “real football” and refused to let them use his name unless it was 11-on-11 and included actual plays from his 1980 Oakland Raiders Playbook.

That ended up being the right strategy, and EA isn’t the only one that benefitted from it financially. John Madden initially turned down stock in the company—which he later regretted because EA’s stock rose from $7.50 in 1989 to $70 in 1999—but he ended up signing a deal in 2005 for EA to license his name, image, and likeness in perpetuity for $150 million and roughly $5 million in annual endorsement fees.

Madden is personally my favorite video game to play. I love football & I love feeling like the coach and the player at the same time.

& of course at number 1. Shouldn’t be a shocker, but it’s FIFA, also owned by EA Sports.

Soccer is the most popular sports game in the world, even if that’s shocker to my fellow Americans, it’s the the truth. Billions of people play soccer annually.

Since 1993 when the game came out on the Sega Genesis, they went on to make 38 editions and sold 325 million copies and continue to grow yearly!

The FIFA video game is currently available in 18 different languages. EA Sports sold more than 325 million copies across 50 countries, and the series has produced $20 billion in sales over the past two decades.

& that’s it folks, the most popular sports video games in the world.

What’s your favorite video game of all time? Let me know in the comments!