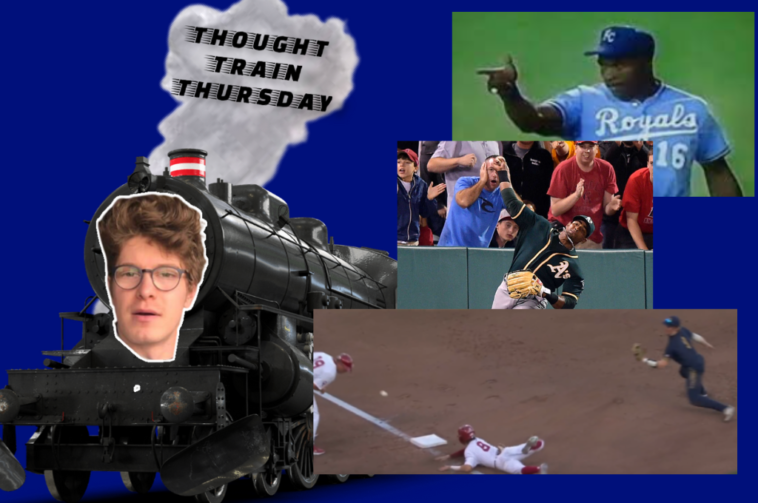 As a washed-up former outfielder, nothing gets me more amped when watching baseball than a runner being cut down on the base paths. I particularly enjoy when it comes at the hands of corner outfielders, specifically. There are more exciting plays in the game, sure, but I respect an accurately-thrown baseball that covers great distances more than anything else in the sporting world. Especially if a guy overthrows and/or neglects the cutoff man.

As someone who has only ever dunked a volleyball on a shadow, the outfield assist was my equivalent of a posterizing dunk growing up.

One of my favorite ever outfield assists happened during the College World Series over the weekend. It involved not only a corner outfielder, a runner who should’ve known better, and a third baseman, but also an unsuspecting coach.

One of the weirdest baseball plays ever pic.twitter.com/pPZIeijbLt

Sure, the iconic outfield assists involving big-leaguers down below are more impressive, but they elicit shock and awe more than anything. The only instance in which people laugh watching these clips are slight chuckles in disbelief that a human is capable of such an incredible feat.

This College World Series example adds a smattering of chaos after the ball skitters – nay, is launched – out of the Notre Dame third baseman’s glove. Throw in a heaping helping of comedic effect when it ricochets off the ‘midsection’ of Oklahoma’s third base coach.

The cherry on top is the baserunner, none the wiser and receiving absolutely no help whatsoever from his hobbled third base coach, absentmindedly walking back to the bag. I’ve watched this clip no fewer than 30 times now and I am no closer to determining whether he thought he was safe and the ball had made its way well into foul territory. Or, did he assume he was out because he was originally tagged well in front of the base during his slide and was sauntering over in amazement that his third-base coach was so far up the line and doubled over?

Obviously, in order for the outfield assist to be complete, an out has to be recorded. You have no clue how thankful I am the Notre Dame third baseman had the presence of mind to make the tag, cementing one of my favorite plays I’ve ever had the distinct pleasure to witness.

All in all, a truly unforgettable play for a myriad of reasons. What sneakily makes it even more notable to me is the fact that my alma mater’s logo makes a cameo.

Speaking of Creighton, take this “cool story, tell it again!” anecdote for a spin. I took a class in college taught by the then director of marketing for the College World Series. He summed it up perfectly by claiming that you can watch any sporting event and see something that you’ve never once seen before, and may never see again. Talk about coming full circle in an unorthodox way. #RollJays

Thanks for joining me for another #ThoughtTrainThursday