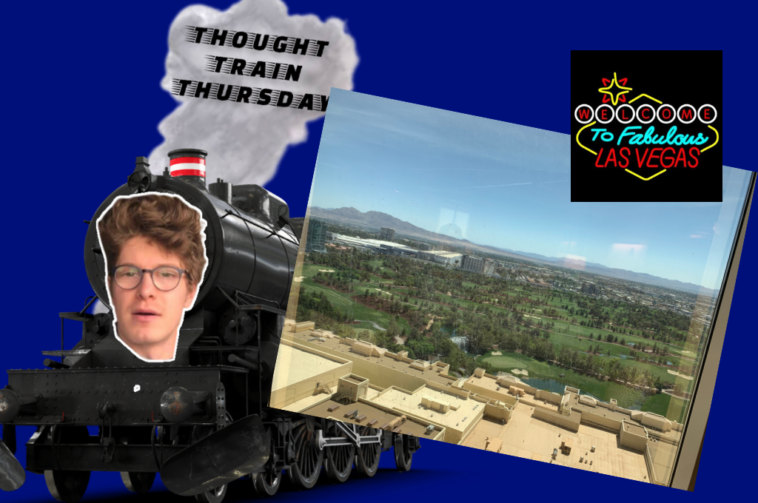 Last month I spent an entire week staying on the Las Vegas strip. It was for a work trip, but I had time most days to mix in some pleasure as well. I was lucky enough to stay at the Wynn on the 24th floor, so I had a magnificent view. Throughout the week I wandered the strip, checked out Fremont Street, took in an Illenium set at Omnia, and ate to my little heart’s content. One thing I did not do, however, was golf.

A coworker – who also was part of the early arriving crew that stayed in Sin City for far too long – and I discussed bringing our golf clubs along with us since our company was paying for airfare. What’s another checked bag fee, anyways? We ultimately decided against doing so, thinking we’d be too busy. We checked in to find we both had a magnificent mountain view that also included the only golf course within walking distance of the strip.

Since neither of us had a rental car it was our only hope, if only we could find the time…

After our work prep for the week concluded midday Saturday and since nobody else arrived until the following day, we had a few hours to kill. How convenient that we were staying at the only hotel on Las Vegas Boulevard with a golf course, we thought. Not just any golf course, but a pristine course we’d observed very few people actually playing on – we assumed due to the unseasonably warm heat.

As it turned out, there was a very different reason why we had seen so few golfers brave the desert blaze. After scarfing down lunch excitedly, he checked tee times. Not only were none available, but even as hotel guests we would’ve had to made golf reservations at least 90 days in advance. If that’s not enough of a deterrent, consider what we would’ve had to pay to play a round of 18.

Upon finding this metaphoric swift kick in the nuts out, we both assumed that posted price had to have been some kind of mistake. I surmised that since the Josh Allen-Patrick Mahomes vs. Tom Brady & Erin Rodgers match was at that very course some three weeks ahead they’d bumped prices up to deter the course from getting too busy. I could respect wanting to show off for the cameras, even if they bumped greens fees up a couple hundred bucks in the month leading up to the most important event in club history.

That wasn’t the case. $550 is the standard price, no matter the time of year. Lots of desert courses in the sweat your balls off region of the country provide generous discounts to those brave/stupid enough to spend active hours outside in blistering heat. Not the Wynn.

In doing my best to be fair, it wouldn’t have cost us anything to rent clubs. However, given a price tag that exceeds my ANNUAL unlimited membership at the local municipal course that’s not quite extending the olive branch in my eyes. It wouldn’t have saved us a single penny to have brought our own bags, by the way.

Also included in the exorbitant rate is the use of a fore caddie that not only provides insight on what to hit and where to hit it, but militantly keeps carts on cart paths as much as humanly possible and out of restricted areas lest you’d like to find yourself chopped up in an oil drum at the bottom of one of the water features. it’s highly recommended that each golfer in the group tips he or she a minimum of $50 at the conclusion of the round.

Before the round, the club cleans and sets out golf shoes and drinks for all players. The cost of a bucket of warmup balls is wrapped up in the bill, but every single fairway better funnel to the middle and the greens should darn near vacuum putts Space Jam style into a 3-foot wide hole for anybody of my means to extract a shred of value from a round like that.

A month removed from finding out the inexplicable cost of a round at Wynn Golf Club and I’m still dumbfounded. There have got to be a handful of experiences which I’d pay $150+ an hour for, but lighting money on fire in Vegas without needing to gamble is not one of them.

Yes, I live in flyover country – but no round of golf on God’s Green Earth should cost more than my monthly mortgage payment.

Thanks for joining me for the latest iteration of #ThoughtTrainThursday