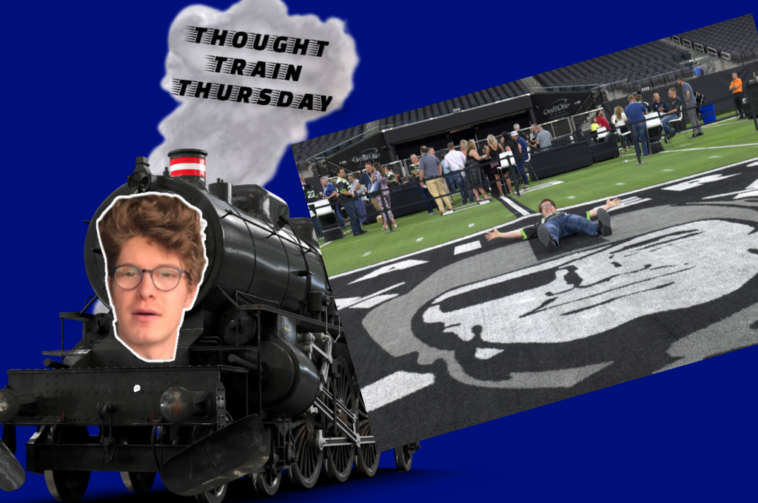 I was recently lucky enough to attend an “exclusive” on-field event at Allegiant Stadium, the Las Vegas Raiders new-ish home. Me laying on the logo at midfield wasn’t the only time I was on the ground that evening, but we’ll get to that later. The event? WasteExpo’s Welcome Reception, of which the garbage truck manufacturer I work for was the presenting sponsor.

Unless you’re also in the garbage business, you’ll have no idea what WasteExpo is. In short, it’s the largest annual trade show celebrating the $85 billion North American solid waste industry. The fact that it kicks off with a quasi-private event at Allegiant Stadium is evidence enough that it’s a fairly significant deal, obscurity be damned.

As part of the team sponsoring the event, my coworkers and I got early (by literally 10 minutes), access to the field, and could choose to hang out in a VIP area just in-bounds from the visitors sideline.

I got chills walking down the tunnel onto the field, especially knowing I was at least partially responsible for what showed up on the graphics boards.

There was more free food and drinks than any rational person would know what to do with, but I wasn’t as concerned with being gluttonous. I was looking forward to what was going on in one of the red zones.

There were four stations in which you could catch a pass in the end zone, throw a football into a netted target, kick a field goal, and test your athleticism by navigating an agility ladder and some pads on the ground. The kid inside me was as hyped as could be.

After shaking the obligatory hands and marveling at the whole spectacle, I excitedly made my way over to the activities area. The field goal kicking line stretched past midfield, so I decided to catch a touchdown pass. A simple skinny post and a ball with enough air under it to fill a hot air balloon later and I’d Moss’d an imaginary defender to catch a pass in an NFL end zone. Pretty #neat.

Next, I made my way over to the accuracy net. The balls were slightly deflated, which isn’t an excuse for, but can explain why, I went 2/3. This was the activity they threw in just to give the stadium ops crew enough to do anyways, so I wasn’t overly beat up about it.

After unsuccessfully attempting to get a few of my coworkers to ‘race’ me through the obstacle course, I settled on asking the guy in his 40’s dressed in business casual attire to accompany me so I wasn’t going at it alone. I laid down on my belly, exploded up, and scurried through the agility ladder.

I’ll never be able to live down what happened next. Take a look.

…a little while later, this happened. pic.twitter.com/kWXYoOXSGj

What makes it worse is that there’s an alternate angle out there and I have no idea how, or where, it’ll end up.

You’ll notice I’m wearing jeans, which I had to borrow from a coworker to meet my company’s dress code for the event. I never wear jeans, ever. I had athletic shorts on underneath for the explicit purpose of donning during my time showing off my embarrassing lack of athletic prowess.

Do you think I wish I’d changed into them?

My rugby days are basically over, but I’d forgotten how painful it was to unexpectedly fall hard and fast onto turf. My hands burned for the next couple minutes, but I’d redeem myself by splitting the uprights.

Or so I thought.

After waiting in line to kick a field goal for what felt like forever, the stadium ops crew skedaddled at 9:30 on the dot, exactly when the event was scheduled to conclude. I was probably fifth in line. My last attempt at glory on an NFL field, maybe ever, ended up with me quite literally falling flat.

Thanks for joining me for the return of #ThoughtTrainThursday.