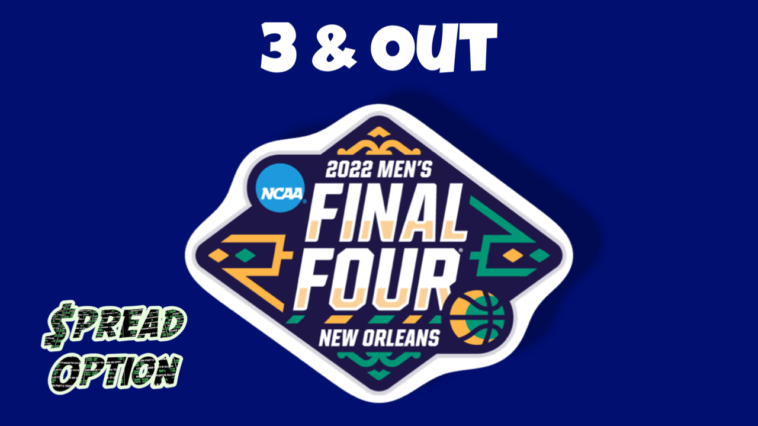 Welcome back to 3 And Out by Spread Option. March Madness is on the starting line, ready to blast off. Equity, fixed income, and crypto markets have been getting brutalized amidst the ongoing invasion of Ukraine. But short and sweet, that’s the motto around here. Let’s get after it.

#1 – Record-High Betting Handle Expected In The US In March, Thanks To March Madness

With March Madness set to begin with the play-in games tomorrow night, sportsbooks are giddy with delight like a kid on Christmas Eve. According to the annual American Gaming Association (AGA) survey, 45 million adults intend to wager real money on March Madness basketball, or around 17% of the US adult population. While a fair amount of those bettors plan on wagering on their bracket, nearly 76% will be betting outside a traditional bracket, which is a 21% increase from last year (and 100% from 2020 😉 ). Following sports betting legalization in several key states including Louisiana and Arizona, nearly 29 million more adults have legal access to sports betting than in 2021. Surprisingly, several publicly traded big names in gaming traded lower this week, largely due to macroeconomic headwinds. DraftKings closed 5.28% lower, marking a 52 week low,  Flutter was down 3.28%, and RSI was down 6.19%. If you’re looking for some of the best picks in the game for March Madness, look no further than the B-Fox and B-Frank Show on Twitter

Earlier today, the European Parliament’s Committee on Economic and Monetary Affairs held a vote where a proposed bill to outlaw proof-of-work cryptocurrencies such as Bitcoin and Dogecoin was voted down 32-24. This gave a mild relief to crypto markets writ large but a more moderate version of the bill continues its journey through the EU Parliamentary system. Cointelegraph has a great write up here. Across the pond, President Joe Biden signed an executive order directed at the nascent crypto industry in the US. This new order directs the US Treasury Department and other federal agencies to study the impact of cryptocurrency on existing US financial markets and if/how it affects national security. Additionally, the order also asked the Federal Reserve to explore whether or not the US central bank should have its own digital currency. I’m not a legal expert but seeing specific words like “study” and “explore” gives the impression that the Biden administration is rather accepting of cryptocurrency and may want to foster growth of the industry to gain a competitive advantage over rivals like China or Russia.

The NFL offseason is only about a month old but there’s barely been a quiet moment thus far. Quite a surprising one was Russell Wilson being traded to the Denver Broncos. The Seahawks will ship off Russ and and a 2022 4th round pick in exchange for QB Drew Lock, TE Noah Fant, DL Shelby Harris, two 1st round picks (9th overall in 2022 and a 2023 pick), two 2nd round picks (40th overall in 2022 and a 2023 pick), and a 2022 5th round pick (whew!). Seattle is officially blowing up, which is great, so stay tuned if 70 year old Pete Carroll sticks around. Aaron Rodgers also agreed to (but evidently has not signed) an extension with the Green Bay Packers for 4 years, $200 million. We’ll see if the return of Tom Brady has affected his calculus but Rodgers has publicly stated his intention to return so no reason to doubt the man’s word. Lighting round: Khalil Mack and JC Jackson both are heading to the Chargers, Mitch Trubisky was signed by Pittsburgh, and Carson Wentz was traded to the Washington Commander for a conditional pick. Astute readers will remember that many of these needs and more were discussed over on Spread Option twitter, which I strongly recommend for anyone looking for trade rumors and gambling shenanigans.