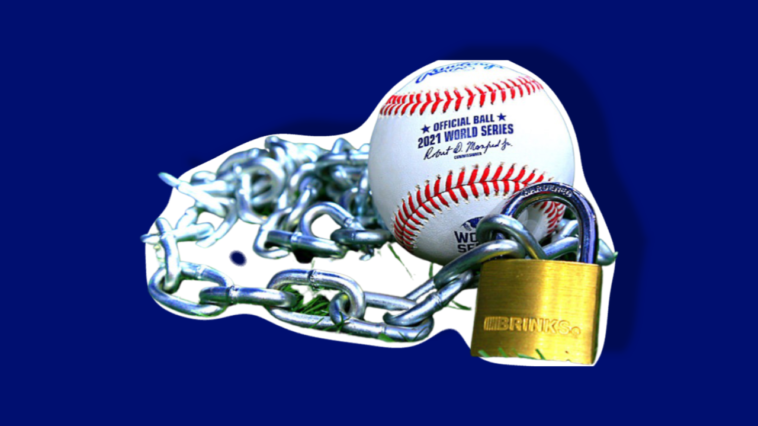 After a long winter of 40 some days of silence, mostly non-progress with bursts of faux-deadline fueled negotiation, and a week after our esteemed Commissioner first cancelled games, the MLB Lockout is officially over.  Finally, baseball is back.

Excuse the locked up ball stock image at the header here, but this was my last opportunity to use one, so I’m rolling with it.

While I never truly thought more than a month or so would be in danger of getting cancelled thanks to only having a 60 game season two years ago, coming out of the lockout with a full 162 on the schedule is such a relieving feeling as a fan.

BREAKING: Major League Baseball and the MLB Players Association have reached a tentative agreement on a new labor deal, sources tell ESPN. While it still needs to be ratified by both parties, that is expected to be a formality, and when it is:

We won’t know whether the CBA is a truly good agreement that swings the balance of power at least somewhat back towards the players until seeing how the next negotiations go (gulp). For now, the players can at least claim movement on a few main issues as victory, without a further widening of the gap.

The deal that ended the lockout may not have fully gone the players way, but the implementation of a universal DH, minimum salary increases that grow annually, a CBT threshold that moved their way, and some form of pre-arb bonus pool were at least some victories.

Sure, they didn’t get all the way there on anything and at least have to entertain the possibility of an international draft, but ultimately the two sides were able to get there in the end.

Ultimately, the rush to a deal at this point in time, one day after the lockout (shortly) cancelled even more games, came from a desire to just get back on the field with the gains that were made.  The fact that the players at large broke from the executive board’s vote to approve the deal speaks volumes for where the bulk of players stood as we waited on the edge of more cancellations or a full season.

Union executive board vote was 8-0 against the MLB proposal but teams voted 26-4 in favor of it, carrying the day, Unusual that the general player population goes so far against player leadership.

While I’ve tried to get more knowledgable about the nuance of the labor negotiations, ultimately I’m writing this blog as a baseball fan, not as a student of shrewd labor negotiations.  I’ve been pro-player in this (if my twitter is any indication), and am glad that they were able to get more of what’s theirs.

While the lockout did get ugly at times, it never truly got to the most damaging point.  The only thing that could’ve accomplished that was missing games.  I’m not saying there wasn’t damage done, but getting to this point means a lot for the sport.

So, this blog is coming as a fan who is ready for the return of their favorite sport, the soundtrack of summer, the ability to sit down and watch the national pastime for a full season of games.  Plus, a crosstown Cubs-Sox series on Memorial Day weekend doesn’t come around every year.

As a White Sox fan, my greatest fear was how a lockout that resulted in cancelled games (or worse, a season) would affect the current core.   With the White Sox firmly in their window of contention, and coming off a season that left a bitter taste in many fans’ mouths courtesy of the Astros, losing a season would have been a disaster.  Even losing games would have opened up more variance for another team to take what should be a clear path to a 12 team playoff for the White Sox.

Luckily, that never happened, and the team has a chance to get back to the promised land.

What should follow is a wild, abbreviated end to the offseason.  Players report in the next few days, Spring Training games start next week, and Opening Day is April 7.  How the Sox address right field, second base, and pitching depth will be paramount.  It may not be the difference in being a playoff team or not, but we saw what those holes did in the playoffs last year.

How the Sox handle Craig Kimbrel is another area of intrigue, but I made my point clear on that weeks ago with some lockout roster-crunching fodder.

For now though, it’s time to get ready for another season of baseball. We’ll be coming your way with baseball coverage on all things Cubs, White Sox, and MLB, with our blogs here, on twitter, and as always on the Shoeless Goat Podcast.

To get things started at home post lockout, we even have a fun Sports on Tap House Divided series against the Mariners on the South Side.

BASEBALL IS BACK. LETS GO MARINERS!!!!!!

Let’s get ready to rock and roll folks.  The sun’s rising, and for the first time in about 100 days, the lockout is lifted and baseball is back.