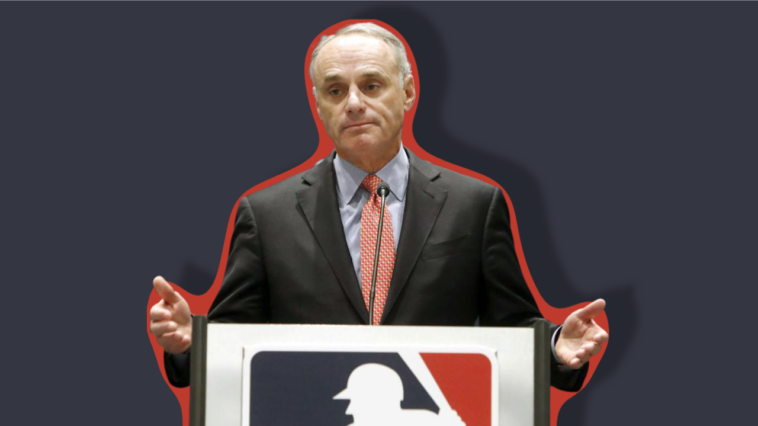 From 10,000 feet, this was not a surprising outcome for the MLB lockout.  The owners and the players union have maintained animosity toward each other with each Collective Bargaining Agreement that expires, and it seems to constantly get worse.  The deadline has now officially passed as of 5 PM EST today to have Spring Training and the regular-season start on time.

Rob Manfred held a press conference following the deadline passing to try and maintain fan optimism, but delivered nothing but bad news on the MLB lockout.  Calling this a pathetic attempt to instill hope would be an understatement.  After confirming that the first two series of the 2022 season are canceled, Manfred implored that fan concerns were top of his priority list, which is a laughable assertion on his part.

“The concerns of our fans are at the very top of our consideration list.” — Rob Manfred, on the day MLB canceled regular-season games, during a league-initiated lockout

It always amazes me that every CBA negotiation the owners put out a PR blitz trying to appear as the good guys when everyone sees right through their façade.  While both sides have made concessions, the owners consistently show an inability to come to the table with fair proposals on the larger issues.  Whether it was wanting a salary cap in the past or the current CBT (Collective Bargaining Tax) negotiation, “good faith” has not applied.

But they still send the commissioner to the podium laughing before he announces the cancellation of games and the continuation of the MLB lockout.

the man who called the world series trophy “a piece of metal” smiling on a day when mlb cancels games pic.twitter.com/UpVgC74yyH

None of the events of the past months are in any way good for the game, but there was some comic relief as Bob Nightengale reminded us why breaking news is not his strong suit.

The two sides appear to have reached a compromise on a 12-team postseason.

After his tweets sparked fan optimism, everyone later realized he was just the megaphone for the owner’s side of the negotiations and the light at the end of the tunnel was further from reach than expected.  It was an almost unfathomable character redemption arc that had an incredibly predictable end.

The abundance of optimism that prevailed from MLB last night has waned today. Just a little more than 2 hours remain before MLB’s self-imposed 5 p.m deadline.

So, what now?  For starters, 162 games are obviously not going to happen.  The current number of guaranteed games now sits between 154 – 156.  Frankly, we might be lucky to see 140 based on how the past months have gone regardless of whatever progress was made the past few days of the MLB lockout.

Manfred stated in his press conference that the next possible date for the two sides to meet and form a deal is Thursday.  To be optimistic, the light is at the end of the tunnel after this weekend.  How far away that light might be, however, is a little hazier at this point.

Manfred also made a comment that players will not be getting paid for games they do not play, which I am sure will be one more thing the sides have to agree on as the players can easily argue that this lockout is not their fault.  As has been clear since the beginning of the MLB lockout, this is  owner enacted and can be removed at any time.

Why there was no effort by either side to come to the table last offseason, or maybe any time before a few months prior to it mattering, I will never understand.  But at this point baseball fans are at the mercy of the stingy owners in the MLB.  Don’t worry though, you are at the top of their consideration list.