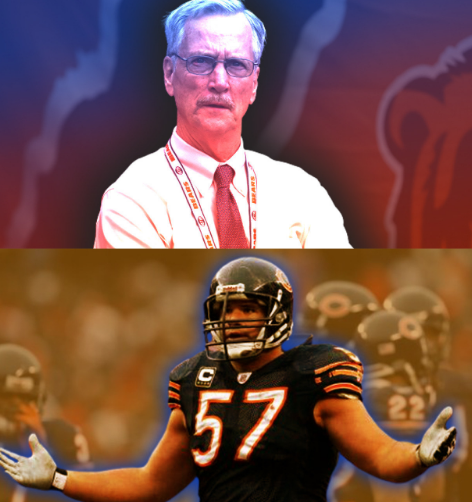 Two of the most unlikely of foes are squaring off in the court of public opinion. In the blue corner, we have a man who needs no introduction, Olin Kreutz. For those who are unaware, he was one of the longest tenured Bears of all, playing 13 years in Chicago, where he was selected as a Pro Bowler 6 times, won the Brian Piccolo award 4 times, and is one of the 100 greatest Bears of all time. In the red corner, we have the 8th oldest son of Virginia McCaskey and current chairman of the Chicago Bears, George McCaskey. Between these 2 enormous figures in the Chicago Bears universe is brewing a bizarre tale of he-said, she-said and rumors that threaten to topple the ownership of the Chicago Bears*.

A few days ago on Twitter, Olin Kreutz described a situation on AM-670 about the Bears reaching out to him about becoming an assistant offensive line coach for a paltry $15 per hour:

The Bears offering one of their greatest ever linemen @olin_kreutz $15/hour to assist the team's offensive line coaches when he likely could make far more than that giving private tutoring sessions to high school linemen is both objectively hilarious and sad.

Frankly, we all know that’s an insulting offer. Olin Kreutz is one of the greatest offensive linemen to ever play the game and knows more about the game than half of the Bears’ coaching staff. He could’ve easily named his price, had he been interested. What really makes this story interesting is how George McCaskey slyly refuted the story in today’s press conference:

For those unable to watch, George McCaskey essentially said that Olin Kreutz is a liar and is fabricating the story about the coaching offer. Definitely an aggressive move, one which Kreutz responded to on twitter moments ago:

Just talk to Harry Hiestand to confirm the offer again and he confirmed it.

Harry Hiestand of course was the Bears’ offensive line coach from 2005-2008, meaning that he coached Olin Kreutz while he was active. Hiestand resumed duties as offensive line coach under Matt Nagy from 2018-2019, which would’ve been when the “offer” to Kreutz would’ve been made. This is where things get interesting. Harry Hiestand and Kreutz went to a Super Bowl together and likely have a close connection with one another. Is it possible that Harry is complicit in this rumor? As respected as he is, Olin Kreutz very obviously has an agenda. There was no love lost between him and former head coach Matt Nagy or former GM Ryan Pace. Kreutz clearly wants to see things shaken up, like so many of us fans, but would he stoop to lying?

On the other hand, George McCaskey has every intention of downplaying this rumor. He doesn’t want to have the reputation of being cheap or going against the best interests of the team. He most certainly does not want to been seen as hostile towards former players but his comments in today’s press conference were most certainly so. Openly antagonizing an extremely respected alum of the team is a very, very poor choice, whether or not the rumor was fabricated. George’s conduct on the issue speaks volumes about his inability to lead a large organization and his failure to cultivate goodwill and excitement towards the team. The McCaskey’s are guilty of something, that’s for sure. Time will tell if they’re guilty of disrespecting one the greatest players to ever wear a Bears jersey. I personally think George is guilty of everything under the sun, unless he lands the coach of the century