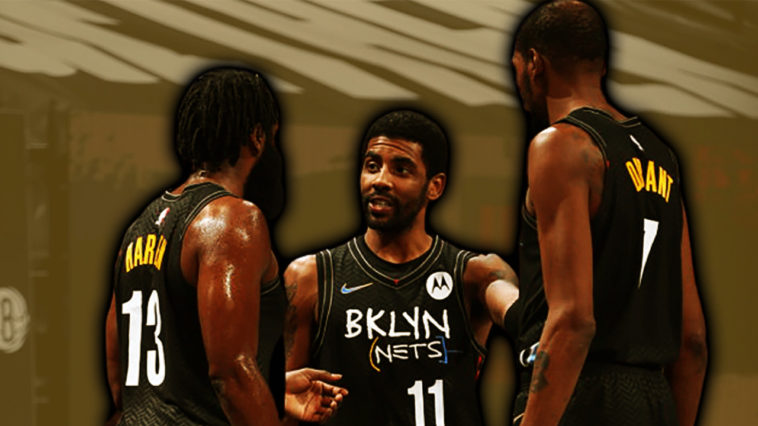 The Brooklyn Nets are already sitting at 1st place in the Eastern Conference this year, and that is without Kyrie Irving. That is with James Harden starting this season with an injury and out of shape. This is with a roster of old players like Paul Milsap, Blake Griffin, LaMarcus Aldridge, Patty Mills, and more. This includes a team that is missing Joe Harris to injury.

So yes, you can sum this up to the fact that Kevin Durant might be the MVP this season right, and James Harden happens to be heating up. BUT, there is one scary thing possibly in sight. Kyrie Irving returning to the Brooklyn Nets… Just imagine, the number 1 seed in the East ADDING Kyrie. That isn’t bad right? I explained in this video how insane this could be:

Now, no one understands what is happening with his vaccine status, or the city of New York but there is now new found optimism that he will be back with the Nets soon. The reports were everywhere this week. We will discuss more on our podcast this week.

Now Kyrie Irving is posting videos pf himself putting some sneakers on, a day after these reports. What does this all mean? I think Kyrie might really be coming back…

Kyrie Irving reports yesterday said he might be back soon, now he’s throwing on the kicks… ?

The report doesn’t go into exactly how that would happen. Irving could get at least a single vaccine dose, and meet the city’s mandate (on Dec. 27 players will have to be fully vaccinated under new mandates). Or with new mayor Eric Adams taking office on New Year’s Day, the city could loosen its mandate, thus making the unvaccinated Irving eligible to play home games.

The third option is the Nets relenting and allowing Irving to be a part-time player, practicing and playing only road games.

The notion of the city loosening its mandate seems unlikely, especially with cases climbing due to the Omicron variant and Adams being more pro-vaccine than his outgoing predecessor Bill de Blasio. Adams indicated in November he wouldn’t change the mandates.

The Nets had fully expected Irving to get vaccinated before training camp opened, but he shocked many inside the organization by abruptly declining. GM Sean Marks and owner Joe Tsai opted against letting him be a part-time player to avoid a distraction.