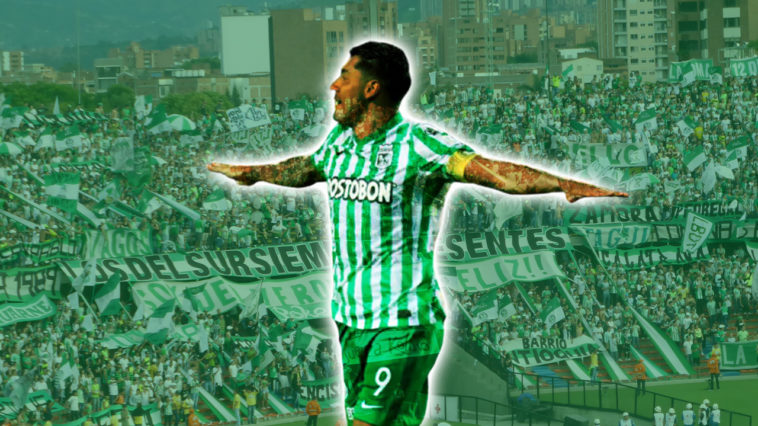 How To Buy Tickets To The Game

Buying tickets to an Atletico Nacional match was no easy task. But according to the Atletico Nacional website you can purchase tickets at any of their official team stores located throughout Medellin. You want to look up  “Tienda Verda” and we decided to go to the one at the El Toroso mall in Medellin. Which is probably the most fancy shopping center in the city. To buy tickets we had to head to the store where we found that since the game we would be attending is a “cup match” that tickets would go on sale the next day. You can purchase tickets online but you’d need a Colombian ID to do so. So if you have a friend who can purchase tickets for you that would work or you can head to the store and give the cashier cash to buy the tickets for you. Because, technically you still would have to buy them online so we exchanged cash to the merchant and he bought the tickets for us online. Tickets for some of the best seats in the house were roughly 70,000 Colombian Pesos or $18 USD. Heading to the game my brother bought a official Atletico Nacional t-shirt and I bought a knock-off on the street (sorry Nike) for $10. 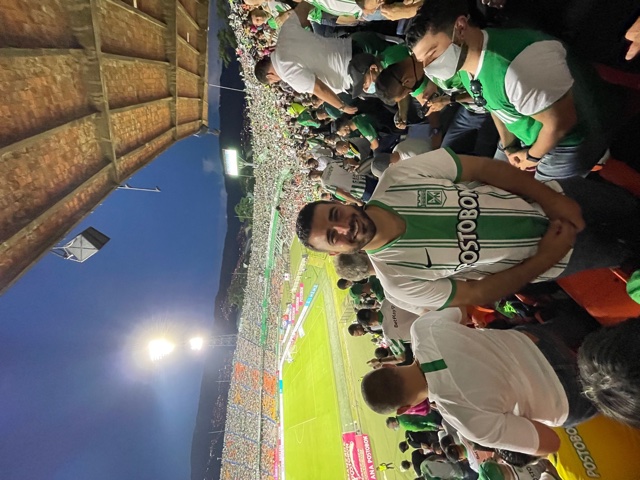 Getting to the game

Well getting to the game itself was easy. Atletico Nacional plays at Atanasio Girardot Stadium which opened in 1953. It holds just under 45,000 spectators and the views from the stadium are incredible. So how do you get to the stadium? Atletico Nacional plays in the neighborhood of Laureles in Medellin. Worried about safety? Don’t. Laureles is one of the most affluent and safe neighborhoods in Medellin. We opted to take an Uber from Poblado to the stadium and it costs approximately 10,000 Colombian pesos which is around $2.50 USD for around a 30 minute drive. You can also opt to take the metro to the stadium which we did not do but noticed that the metro station was right next to the stadium. Once your Uber drops you off at the stadium you will begin to walk and see 1000s of people walking towards the stadium. On the way you’ll see plenty of stands selling food, and beer. Suggestion, if you like to drink before the game, have a beer because there were only non-alcoholic drinks inside the stadium.

Atanasio Girardot stadium in Medellin is ready for the 1st leg of the Colombian State Cup between Atletico Nacional and Deportivo Pereira#FinalCopaxwin pic.twitter.com/HUGClIIfXF

Now for game time. The game experience itself is incredible. As we walked to the gate that our tickets were we waited in line to be scanned by security. To our surprise, we saw a pile of belts on the side. Turns out, no belt buckles are allowed at the game and you can leave it to the side and pick it up after the game or go to one of the beer and food vendors outside the stadium and pay them to watch it. So what did I do? Well, at the suggestion of my brother I took off my belt, hid the buckle in my crotch and went to go get rechecked at a different gate. It worked, we were inside. Inside, the stadium was fantastic. The views were incredible. And the chanting was amazing. I have been to soccer matches before, and you get a few chants. But at an Atletico Nacional match you are hearing chants almost all game long. It’s amazing. The seats are all crammed together and people feel like they are on top of each other. But don’t fear, everyone is friendly and unlike many soccer matches in other parts of the world men and women and children are welcome and jammed packed together. The game itself was high quality. And since it was a quarter-final of a cup the tensions were high playing against one of their rivals Santa Fe. At halftime, the mayor of Medellin was introduced and booed heavily by the crowd. Why? Well we decided to ask someone nearby and he simply stated..” because he’s an asshole”. Atletico Nacional won the game in Penalty Kicks and then the after party started.

Hot and amazing atmosphere at the Atanasio Girardot Stadium in Medellin, Colombia ?? It's the State Cup semi-final 2nd leg between Atletico Nacional and Deportivo Cali (2-2 in the 1st leg) in #ClasicoVerde ????
? Atletico Nacional pic.twitter.com/PTX0iOyfSc

What to do after the game

If you know Medellin, you already know it’s one of the most fun cities not only in Latin America but in the world. The music, the food, the atmosphere, there is not much that beats the city of eternal spring. If you are not from Medellin you usually go party either in Poblado or maybe if you know a little bit about the city at Las Palmas. But the locals also party at La 70. And Atanasio Girardot Stadium is right next to La 70. So after the game we followed the crowd to the beginning of La 70 which is a long strip of bars, clubs and restaurants where people go to drink. The drink of choice? C’mon it’s Colombia. Aguardiente. For those who don’t know, Aguardiente is a traditional Colombian liquor that is anise based and tastes like black licorice. Well we decided to begin the night at a liquor spot where everyone was watching more football. We bought a mini bottle of Aguardiente (200 ML) and 2 beers for about $8 USD. Let the party begin. At the bars after the game you still see everyone chanting Atletico Nacional songs and literally everyone is wearing their Atletico Nacional jersey. After the game you can walk around La 70 and check out one of 100s of spots, get a traditional Colombian street hotdog and really enjoy your time. If you decide to go to an Atletico Nacional match just hope they win, because that’s when the parties really pop off.