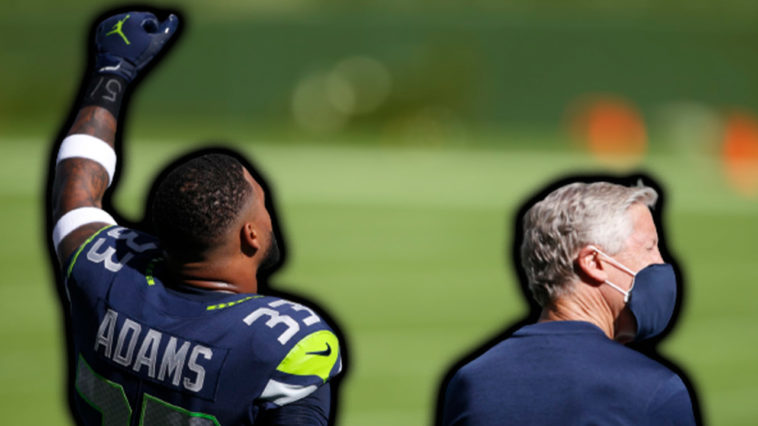 Imagine walking into a house. Perfect room, clean, immaculate, spotless. The furniture and decor are trendy and contemporary. Walk into the kitchen, spotless. Everything looks like it’s in pristine condition. Pretty damn good. You want a glass of water, so you open up the cabinet to grab a glass to pour the water. And all you see is broken glass, shards everywhere, startled you, shut the cabinet and open the adjacent cabinet. Ok good, nothing is broken, what a relief. So you grab a cup and look inside and it’s the dirtiest cup you’ve ever seen, with mildew growing in it. Ugh, forget it, there might be a bottle in the fridge. You open up the fridge and to your surprise 200 spiders are crawling around, quickly you shut it. You begin to look around, the bathrooms are gross, the bedrooms are a mess and the house is crumbling. Maybe I am exaggerating a tad bit but welcome to the Seattle Seahawks.

Today the news broke that the Seattle Seahawks would be losing Jamal Adams for the rest of the season, just completing the cycle of the season from hell. Even if the Seahawks finished the season 5-0 we’d still only have a 60% chance of making the playoffs. Hope was dwindling. Now, Jamal Adams has been much ridiculed but the last few weeks it felt like he was finally healthy and playing better. Well, now he’s injured yet again.

Jamal Adams just as I felt like he was starting to make an impact is out for the season. And the season from hell continues #seahawks pic.twitter.com/qrpG0bVHnz

When the Seahawks traded a 2021 1st round pick, a 2022 first round pick, a 2021 3rd round pick and safety Bradley McDougald for Jamal Adams it felt desperate at the time. This was a haul for a quarterback not safety. But alas, we weren’t good at drafting anyways. Well, as of today the draft pick would be 5th overall, so let’s just hope we win some games at the end of the season, pretty steep for a blitzing safety who has ZERO sacks this season. But that was the problem with the Seahawks. It was a house on the surface that looked beautiful but the problems were actually really huge. We had all the pretty stuff looking great. A shiny quarterback, some cool wide receivers, and some shiny big names including the head coach. But the problem was the foundation. No offensive line, no pass rush and no big playmakers on defense. So yeah, the Jamal Adams piece made sense in theory trying to get a playmaker on defense. But how do good teams rebuild? Through the draft and the Seahawks well, let’s just say the draft and decisions of trades we made have been eyebrow raising ever since the 2nd Pete Carroll Draft. Let’s review the first round drafts.

This was it. This draft for the Seahawks was superb. We got a really good offensive tackle and a safety who at times was the best safety in the league. This being Pete Carroll’s and John Schneider’s first draft was amazing. Pete, being straight out of college, had a pulse on the talent at the college level and thus, made an excellent evaluation and brought some key pieces to Seattle.

Overall you have to say the idea was there. Build an offensive line. And bring in a guy from Alabama. Overall, the idea was right but the evaluation was wrong. Wonder what we could have got in that spot? Well, Cameron Heyward with the 31st pick would have been great. Or could I interest you in Kyle Rudolph with the 43rd pick? But overall it’s hard to say the Seahawks were trying too hard to be cute here.

Speaking of trying to get cute… Bruce Irvin with the 15th overall pick. Keep in mind when this draft pick was announced it left analysts confused. Most people had him with a 2nd round grade. He was good at times for the Seahawks but we could have got him much later in the draft or have gone with Chandler Jones who went 21st, David DeCastro 22nd. Sure this draft ended up being great in later rounds ( we all know why ) but that doesn’t mean we should just throw away valuable assets in 1st round picks.

The good news is that we won a Super Bowl during this time and that’s fucking awesome news. Wouldn’t trade this success for anything but. We traded a first rounder for Percy Harvin, we traded out of the first round in 2014. And then we traded Max Unger AND a 1st round pick for Jimmy Graham who was disappointing at best in Seattle. More wasted assets.

In theory another good idea went wrong. I am still waiting for Iefdi to be good. Also Derrick Henry at 45th would have been a nice heir apparent to Marshawn Lynch. Shit.

Well, now we go with the heir apparent to Marshawn Lynch. Too bad everyone once again raised an eyebrow wondering why we went with trying to be too cute again. Penny has done nothing but continue to let us bang our heads against the wall hoping he finally does good. Well, spoiler alert, PENNY WILL NEVER BE GOOD. Oh and with the 35th pick the Cleveland Browns selected Nick Chubb who most mock drafts had us taking at the time. Great.

Finally a winner. Brooks has been the best draft pick we have had in a decade. That’s it. We had one good first round draft pick in 10 years.

Seattle's 1st round has been a disaster:

no team had less

hasn't hit on ANY of them, NOT ONCE exercising the 5th year option or an extension

no team is worse

And there you have it folks. Look, if we want to see the old success of the Seattle Seahawks again we need to rebuild the right way. And that’s stockpiling draft picks, protecting our quarterback whether that’s Russell Wilson or another player. Look, football is not a simple game but I like to live by two simple rules. Protect your quarterback and get to the other team’s quarterback. You do those two things well, your team should have success. It’s time for the Seahawks to clean up their house. Put away the dirty dishes, get a good foundation and build through the draft. Patching up holes and painting the walls to hide an ugly color isn’t going to cut it. It’s time to roll up our sleeves and get to work.