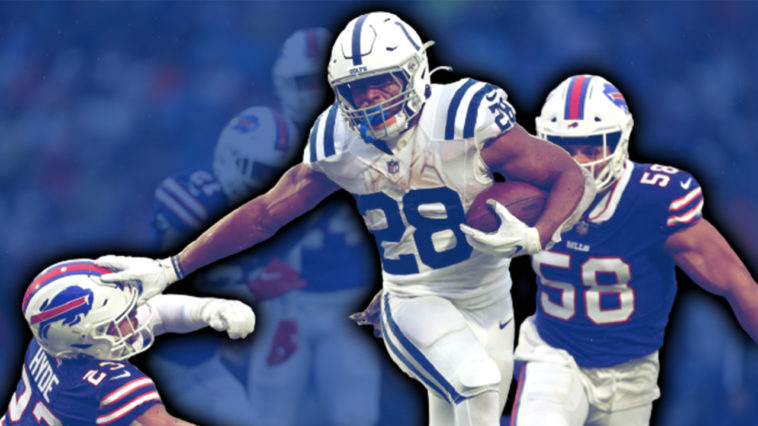 Week 10 NFL Sunday is officially in the books. The end of NFL Sunday is always bitter sweet. In a interesting way, I can literally watch 11293 hours straight of NFL football. But alas, week 9 is in the books and we have 11 more Sundays to go. Here are the 3 biggest story lines from week 9 NFL Sunday and to get a full recap of all the games listen to the Just Talk Podcast. For more NFL podcasts as well, visit our Sports On Tap Podcast page.

The Colts are trying to claw theirselves out of an 0-3 start to make the playoffs. And there are a ton of people to thank for this including (no one wants to admit it) Carson Wentz. But the biggest person to thank is of course Jonathan Taylor who accounted for 5 touchdowns against the number 1 ranked defense the Buffalo Bills. Taylor has been so good that it has even sparked some Jonthan Taylor for MVP talk. And with no clear favorite leading the race, it’s very possible that Taylor wins the MVP.

The Eagles are in a really good position. And it’s very possible they will not even get on a airplane the rest of the season. So fly eagles fly might not be the best analogy. Why no airplane you ask? Great question. They play 3 more road games all season, and that’s twice in New York against the Jets and Giants and one time in Washington against the football team. And Jalen Hurts has been sneaky good this year. He has accounted for 21 total touchdowns, nearly 3000 total yards and only 5 interceptions.

Justin Herbert is a star in the making. And it was showcased even more during Sunday Night Football where the Chargers tried to lose the game in the most Charger’s way possible. But instead, they now have Justin Herbert and found a way to win despite playing in front of a packed house in Los Angeles of Steelers fans.

Justin Herbert was UNBELIEVABLE vs. the Steelers ??? pic.twitter.com/E39BQAkwRX