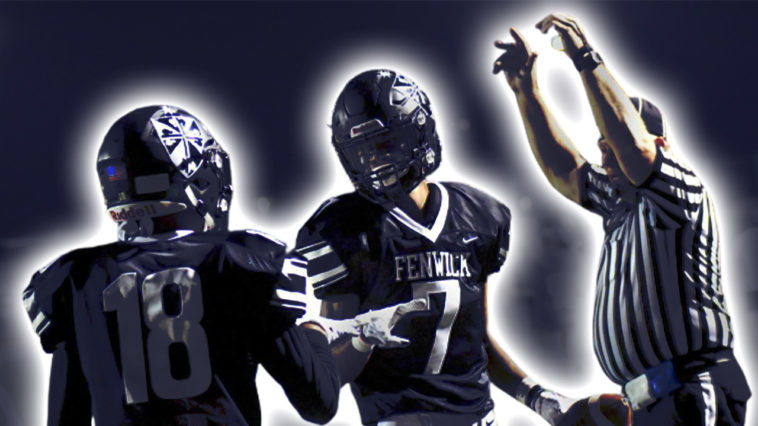 This is what the goal has been all along. Win the games you’re supposed and compete all season long for a shot at the playoffs. The young men of this Fenwick football team have done just that and more. Just last week, Fenwick faced a true test of their abilities by heading to #9 St Ignatius. The Friars went on the road to a hostile environment, played their style of football, and got the job done. It wasn’t pretty, with more than a couple personal fouls being called both ways and a pretty serious lapse in officiating standards on a critical Ignatius drive that nearly cost Fenwick the game, but it was a solid, convincing win. Following that game and the playoff announcement, Fenwick received a 2 seed and is matched up against 15 seed Kaneland from Maple Park, IL. Kaneland went 5-4 in the regular season and is a member of the Kishwaukee River/Interstate 8 – White Conference. While the Kaneland Knights got off to a slow start, they’ve been hot in their last 2 outings, scoring 52 and 55 points in wins over Ottawa and LaSalle-Peru respectively. This Friday night, however, will be on their toughest matchups of the season, if not the single toughest.

Fenwick, of course, is coming off a quality win against St Ignatius and ended their regular season 7-2. The Friars are also known for their offensive prowess and have a nice, blended attack on the ground and through the air. The weather tonight does not appear to be cooperating, with heavy rains and temps in the 40s forecast all the way through game time. Nonetheless, the Friars ought not be discouraged because of their ability to run the ball behind a stout offensive line. And we can’t forget special teams, especially with #42 Brendan Doyle locking things down on kickoff team. Chances are low for a surprise return TD by Kaneland with him on the field.

If you want up to the minute updates on the game, be sure to follow us on Twitter @sontchicago for all things Fenwick.