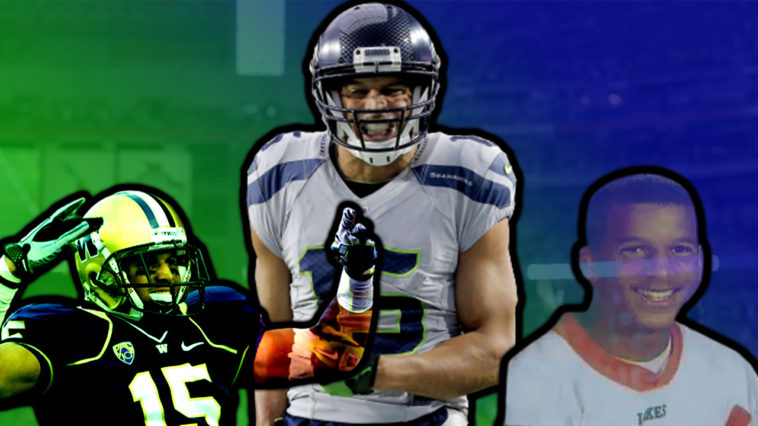 Jermaine Kearse is definitely a Seattle area legend. Jermaine Kearse grew up in Fort Lewis, Washington to a military family. He then went and attended Lakes High School in Tacoma where of course he excelled at football. But that was just the beginning. After High School Kearse attended the University of Washington where he became a Husky legend. But the connection to the Pacific Northwest didn’t stop there; he then joined the Seattle Seahawks as an un-drafted free agent in the 2012 season. He spent 5 seasons with the Seahawks catching 11 touchdowns before finishing his career with stints with the New York Jets and Detroit Lions. But his mark with the Seahawks will be felt forever as he had two of the most memorable catches in Seahawks history. What was Jermaine Kearse best catch of all time? Well you decide.

During the NFC Championship game during versus the Green Bay Packers; the Seattle Seahawks found themselves in a hole. Russell Wilson had thrown 4 interceptions and all 4 of those interceptions were targeting Jermaine Kearse according to Kearse himself on the Sports On Tap Seattle Podcast. But, that didn’t stop Russell Wilson from going back to Kearse in overtime in which is one of the most memorable plays in Seattle Sports History. Kearse caught the game winning 40 yard touchdown pass to complete the Seattle Seahawks comeback and send the Seahawks to the Super Bowl.

Kearse was known for big plays during his Seahawks & UW career, including a catch that sent the Seahawks to the Super Bowl

Jermaine Kearse could have had what maybe would have went down as the best play in Super Bowl history if the Seattle Seahawks had beat the New England Patriots. Late in the 4th quarter against the Patriots Jermaine Kearse hauled down an acrobatic juggling catch which put the Seahawks in a 1st & goal situation against the Patriots. It led to one of the most discussed plays in history of the NFL just two plays later where the Seahawks threw an interception instead of running with Marshawn Lynch. But the Jermaine Kearse catch would have went down as maybe the greatest play in Super Bowl history if the Seahawks had scored and won the game.