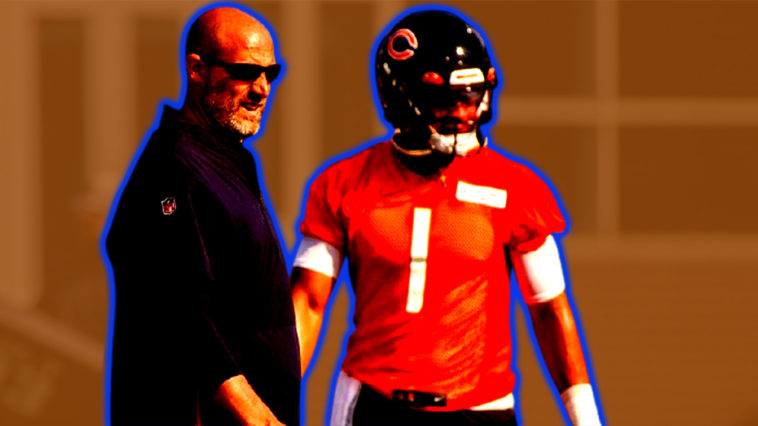 Heading into Week 4, the Chicago Bears record sits at 1-2 but all hope is already lost. In all fairness, the Bears have faced an extremely tough schedule so far. The Rams have been playing lights out football and are serious Super Bowl contenders, especially after beating the Bucs. The Browns are also heavyweights and were a botched punt away from knocking off the Chiefs (and nearly did so in the AFC Divisional round last year). Cincinnati would definitely be classified as a beatable team but things don’t look quite so optimistic moving forward. During a press conference today, Oct 1, Matt Nagy fielded a number of questions from reporters, with the number one issue being a rather important one: who is the starting quarterback?

Bears’ HC Matt Nagy said today that his starting QB for Sunday’s matchup against the Lions will be a game-time decision.

The Bears are heading into their first divisional matchup of the season and it is still unclear who the starting QB is. Unbelievable. I know injuries are affecting both Justin Fields and Andy Dalton and WE ALL KNOW that Nagy wants Dalton to regain his starting spot once he’s healthy but this is mind-boggling. By this logic, Nagy could be starting Foles, or even worse, one of the 3 QBs the Bears worked out this week:

It really is hard to come to terms with that this is the same coach that won the NFL Coach of the Year award in 2018. I feel like The Bears are a lot closer to the 3-13 John Fox era than anyone wants to admit. Matt Nagy has singlehandedly teetered this team on the brink of disaster. Add on top a potentially expensive move to Arlington Heights and talks of the McCaskeys’ selling, we may be in for some dark days ahead.

A rare glimmer of hope, however, emerged from that same press conference.  When asked whom would be responsible for play calling duties, Matt Nagy also insinuated that it would be a game time decision, or at the very least, made it ambiguous as to whom specifically will be calling plays. If, by some chance, Bill Lazor does indeed take over play calling, the Bears may be able to regain some lost momentum. Fields admittedly had a rough start to his career, primarily due to a lack of protection, but he’s gifted and confident enough to bounce back. Bill Lazor may not be an offensive mastermind but he solves the number one issue regarding play calling: removing Matt Nagy. Be it Lazor or Virginia McCaskey, anyone is an improvement over Nagy at this point. Also, when Lazor took over on offense last year, the Bears offense produced 8 points more per game so at the very least, the scoring situation will be moving in the right direction.

We all wish it was as easy as installing Bill Lazor as play caller and watching all of the Bears’ woes disappear but this year will be a dog fight no matter what. What Lazor taking over signifies is change and adaptation. We may not be flawless, but we’re working on our weaknesses and playing to our strengths. Our strengths right now, of course, would be our run game and defense. If those 2 factors provide a balance and reduce the strain on a rookie QB, the Bears may just end up turning things around before it’s all said and done.