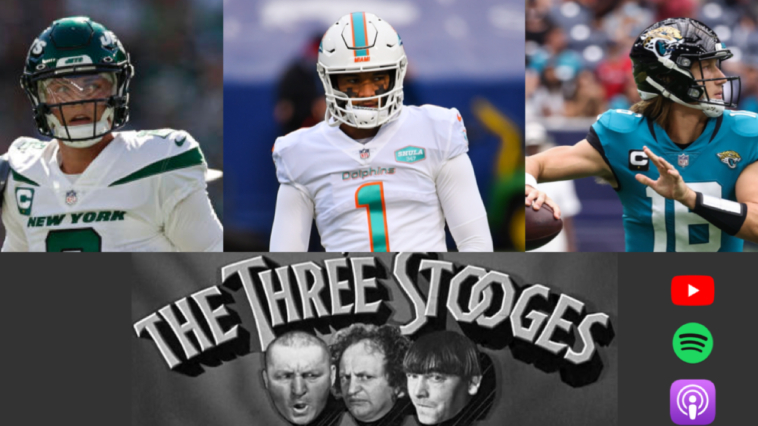 Being a high level team in the National Football League usually means you have a high level quarterback. It goes hand and hand. Sure, sometimes teams get lucky and they end up having a mid-level or even bad quarterback and somehow they find success. But 99% of the time that’s not the base. Teams are willing to do ANYTHING to find that next high-level quarterback that can be the backbone of their team for years to come. So on Pod That we decided to take a look at the absolute worst quarterbacks and the absolute best quarterbacks in the league on a week to week basis and decide who are the Three Stooges of NFL Quarterbacks and Three Kings of the NFL Quarterbacks. So after week 2 of the NFL season here are our Three Stooges and Three Kings we put on our podcast:

Trevor Lawerence is going to be a great pro. But, he’s going through the rookie growing pains at the moment. And can you really blame him? Jacksonville is asking him to do a ton and he’s slinging the ball around the field but with not much success. Sorry Trevor Lawerence you are on of the three stooges.

Zach Wilson has a ton of confidence. And really that could actually be one of his biggest issues. Swagger is cool, but man you have to be somewhat careful with the ball and not try to hit score 6 points on every throw. Wilson unlike Lawerence is not a generational can’t miss prospect. He has the arm, but does he have the judgement? Sorry Zach Wilson you are on of the three stooges.

Who you got as the 3 Stooges of NFL QBs?! ? pic.twitter.com/ziGKTBvXtz

I mean what Tom Brady is doing is something we can’t explain. I think humanity will look back Tom Brady like we look at Babe Ruth. Something that almost sounds too good to be true. But we are witnessing it in real time right now so enjoy it while you can. Tom Brady you are a king.

Don’t let one loss fool you. Patrick Mahomes did lose his first ever game in the month of September on Sunday, but the defense and his running back fumbling has more to do with it then Pat himself. Patrick Mahomes will likely remain a king all year long. Patrick Mahomes you are a king.

Kyler Murray has been the most electrifying player in the NFL thus far this season. He’s dazzled, he’s entertained and he has the Cardinals sitting at a pretty 2-0 start. Kyler Murray you are a king.

Every #NFL Week we rank who are currently the 3 Stooges of Quarterbacks. @GeorgeOnTap & @SamiOnTap agreed upon: