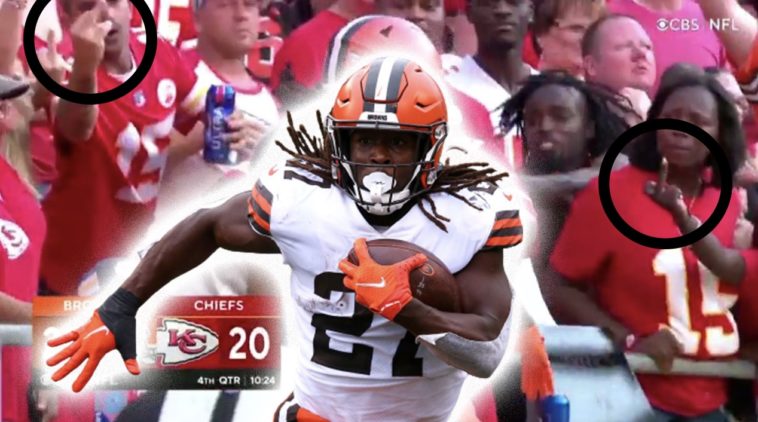 Kareem Hunt used to be loved by Kansas City Chiefs fans…. until you know what happened. Well, he was out in KC and the Cleveland Browns took a chance on him as he betters himself as a person. It worked out well, more than well, they have the best duo of running backs with Nick Chubb and Kareem Hunt. Yet, back in KC today and scoring a TD, he tried to jump into the stands and was welcomed with two big old middle fingers.

Kareem Hunt tried to jump into Chiefs stands and got good ol finger from a fan ? pic.twitter.com/0UVCsdIgwu

Despite a big lead for the Browns they took the loss. Baker Mayfield and Patrick Mahomes exchanged blows, but Cleveland ran out of steam in the season-opener. Mahomes was able to lean on his stars — tight end Travis Kelce and wide receiver Tyreek Hill. The two combined for 273 receiving yards and three touchdowns whereas all four of the Browns’ touchdowns were scored on the ground.

Kareem Hunt boutta get hit with karma for Lambeau leaping in the away crowd pic.twitter.com/OFCXF7fYTz