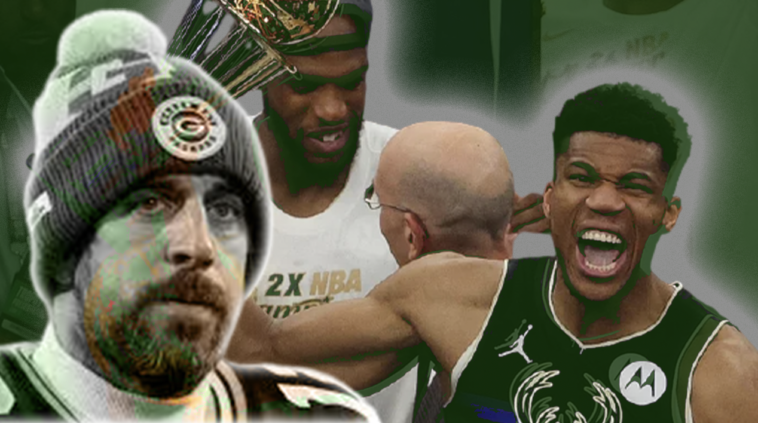 At first glance, it may seem that there’s nothing wrong at all with the Milwaukee Bucks winning an NBA title for the first time in 50 years. In fact, I probably seem like a real douchebag for even trying to paint this achievement as somehow negative. That may be true, but I still believe that Giannis leading the Bucks to a championship may serve as a powerful motivator for Aaron Rodgers to win another ring, now that he’s finally decided to stay put in Green Bay.

When Giannis Antetokounmpo first was drafted in by the Bucks, they went 15-67 with the worst record in the NBA. Fast forward to the 2020-2021 season, the same Giannis-led Bucks had 16 wins…in the playoffs alone. Talk about an amazing turnaround of a franchise by a once-in-a-generation talent. A lot of people are giving Giannis praise, rightly so, for winning a championship “the right way” by not forming a super team in the offseason or by demanding a trade to the top contender. Truly remarkable stuff, given the state of the NBA the past decade or so. Just check out this clip about his thoughts on “super teams”:

Giannis on the Ether beat.

Switching gears to the NFL, just last season, Tom Brady left behind his legacy in New England and headed down to Tampa Bay to challenge himself and to prove that he didn’t need a specific coach or system to win. As we all know, TB12 did just that, winning Super Bowl LV against the Chiefs this February. I’m not gonna sit here and try to compare Tom Brady to LeBron or Kevin Durant, but I do think a lot of parallels exist between Aaron Rodgers and Giannis. Both guys entered the major leagues in somewhat unconventional, albeit high-publicity, manners. Giannis was drafted in the first round but was just barely 18 years old and only really had experience in the Greek domestic league. Aaron Rodgers, who started his college career at a junior college in Oroville, CA, slipped all the way to 24th in the 2005 NFL Draft and was notoriously shunned by Brett Favre as his replacement.

The Packers had an impressive season in 2020-21 but by no stretch of the imagination would anyone call them a “super team”.  Davante Adams is a helluva WR1 but he is catching passes from the reigning MVP, after all. Green Bay’s run game is above average but by no means dominant and their defense is pretty good but not quite championship caliber. Thus far, the Packers have a few insignificant free agency signings, mostly backups on defense, so they really can’t say that they’re a odds-on favorite for much of anything, besides winning the NFC North, at this juncture. Green Bay lives and dies by how their quarterback performs and a properly motivated Aaron Rodgers can take this existing squad as far as they’d like to go. That’s why the Bucks winning an NBA championship is so dangerous for Bears fans everywhere. In his own backyard, Aaron Rodgers saw a true rags-to-riches story about how a talented athlete willed himself to a championship. Aaron Rodgers nearly did just that this previous year, had head coach Matt LaFleur gone for a TD instead of a field goal late in the NFC championship game against the Bucs. If anything, Giannis winning a ring may compel Rodgers to really commit to his teammates and coaching staff in 2021

Of course, this all really comes down to whether or not Rodgers doesn’t rock the boat mid-season. As of right now, he has decided to get back to business and wants to win in Green Bay. Rodgers, of course, is a notoriously hard dude to get a read on. Admittedly, tweets like this don’t strengthen the “he’ll stay in Green Bay forever” argument. Sub tweet city:

Incredible job by Wes and Mark, Peter, Jon Horst our GM made some incredible moves, and our stars played like stars. Can’t stop 34 ???? #champs

All of this talk, of course, is very bad news for the Chicago Bears. Sure, we did just draft the new face of the franchise QB Justin Fields but it is very unlikely for him to start week 1, if at all this season. Maybe, just maybe, he’ll be ready to go for Green Bay at home in week 6 but Nagy has made it clear that Andy Dalton is QB1 (for now). With the Vikings still trying to figure things out and Detroit very likely to stay at the bottom of the heap, the NFC North is currently Green Bay’s division to lose…if Aaron Rodgers stays in control.  Odds are that he’ll want to match the intensity of Giannis and to bring another title of his own back to Wisconsin.