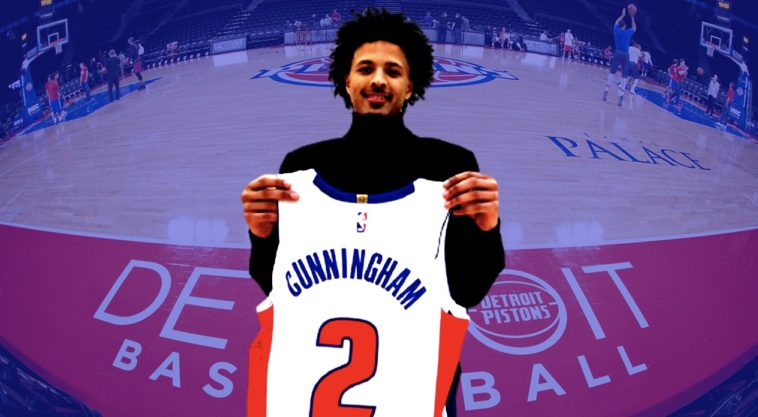 The Detroit Pistons made Cade Cunningham out of Oklahoma State the number one overall pick of the 2021 NBA Draft after he spent one season playing for the Cowboys. Many tout Cade Cunningham as a can’t miss prospect. He’s 6 foot 8, can handle the basketball great, scores and shoots at a high level and has amazing vision. He is a 6 foot 8 point guard and in today’s NBA this is a much needed type of player who has modern versatility which any team would be lucky to have. During the latest episode of Pod That: Two Brothers Talking Sports; George & Sami Jarjour discussed some fun facts to get to know more about Cade Cunningham.

Detroit Pistons newest addition Cade Cunningham grew up in Arlington, Texas. His brother Cannen Cunningham was a division 1 basketball player for SMU and after graduating from SMU went to Poland to play professionally for one season. When he returned he was Cade’s biggest mentor and coach. Cade, who played center at SMU, saw that Cade should start focusing on point guard the way the game was going so he made him into a point guard. Thus, Cade began his transformation to the point guard position where he excelled to get a scholarship to Oklahoma State for one season before being drafted first overall by the Pistons.

Some additional fun facts about Cade Cunningham is he is a vegan. After he was drafted by the Detroit Pistons the 6 foot 8 220 pound point guard was asked by ESPNs analyst Kendirk Perkins why he went vegan: “I wanted to know, what made you go vegan? As a youngster, as far as your nutrition and taking care of your body, I think that was a very mature thing.” Cunningham replied: “I think, bigger than anything, I just wanted to try something new for my body and see how my body reacted to it. So, once I tried it, I did it for two weeks … [when] Team USA had to go out to Greece, we’re eating McDonald’s and stuff … we weren’t accustomed to the food that we had out there. So, I started back eating burgers and things, [but] on that trip, I told myself, ‘I’m going back to vegan, and I’m sticking to it.”

There are a few comparison to Cade Cunningham’s game in the NBA today. Many draft analysts compare Cade to former Detroit Pistons great Grant Hill. They also compare him to modern day players like Jayson Tatum and Luka Doncic.

The Jarjour brothers discussed a bunch of fun facts about the 2021 draft lottery pick on Pod That. Download the latest episode here on Spotify or find it on your favorite platform by searching “Pod That: Two Brothers Talking Sports”: