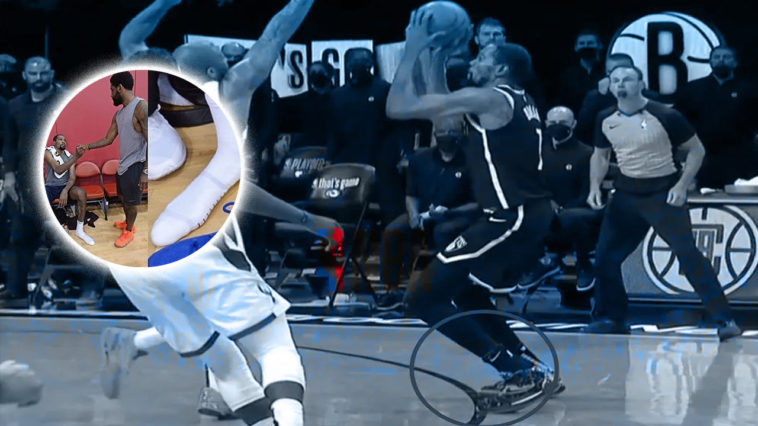 A funny BIG detail has fans talking after the Brooklyn Nets lost game 7 against the Milwaukee Bucks in the 2nd round of the Eastern Conference Playoffs. And that detail is Kevin Durant’s foot. Kevin Durant hit a 2 pointer to force overtime in game 7. However his toe was just on the line which would have sent the Nets to the Eastern Conference Playoffs. Well it was literally centimeters away from being a 3 point shot.

#NBAplayoffs GAME 7, BUCKS WIN !
Nets are not in Conference Final because the feet of Kevin Durant brush the line of 3 Points in one of the greatest shot of all-time after a spin move. UNREAL. pic.twitter.com/nMcErN3kVP

After the game Kevin Durant pointed out if his feet weren’t so big than the game would be over. He was joking of course, but not really.

Kevin Durant said that he initially thought his shot at the end of regulation was a three.

"But my big ass foot stepped on the line," Durant said, in part. "I just saw how close I was to ending their season with that shot."

The funny detail in all of this however, was that Kevin Durant actually wears a shoe size bigger than he needs to. According to a old story by Royce Young when Durant was in Oklahoma.

Did you know: KD actually wears a full size bigger in games than his actual shoe size. From @Herring_NBA’s 2018 story about why KD’s shoes fall off all the time: pic.twitter.com/kKo2gthZR8

Now not sure if this still applies to him today. But that detail could have costed the Nets a trip to the Eastern Conference Playoffs. On Season 2 Episode 4 of Pod That the Jarjour brothers discussed: