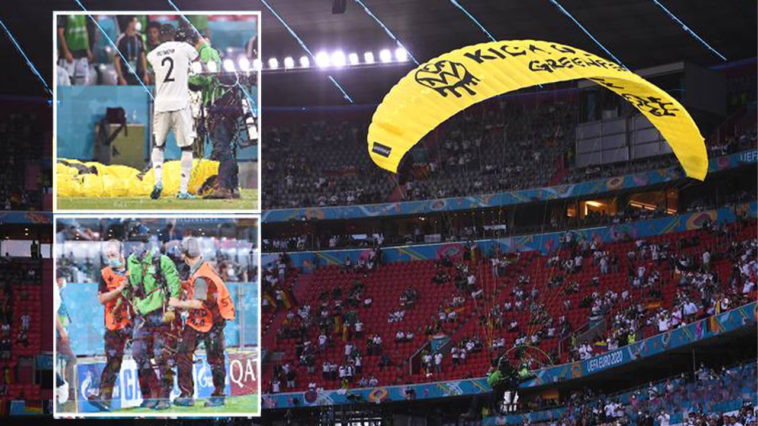 During the France vs Germany Euro Cup match this evening in Germany a parachuter flew into the stadium causing a little bit of a stir. It was caught on camera of course but the crazy part of the whole ordeal was that the Parachuter did not account for the spider-cam which nearly caused a crash not just onto the pitch but into the fans. A journalist covering the match caught the whole moment on camera and it was insane.

Spoke to the lighting crew. None of their staff injured but looked like parachuter made contact. Hearing a woman is being treated and he may have broken his ankle landing on the pitch but both unconfirmed. #GERFRA #Euro2020

Can't believe I just caught this on video. Parachuted into the stadium, got caught in the spider cam and nearly crashed into the crowd. Hope he's ok! #GERFRA #EURO2020 pic.twitter.com/PJ49WYdFM9

If it was Greenpeace protest nothing will convince people quite like putting many people in danger and disturbing one of the most important soccer matches of the Euro Cup. I am sure Greenpeace made a lot of new fans today (sarcasm intended). The Jarjour brothers discussed this and brought up that this isn’t the first time we have seen this happen in major sports.