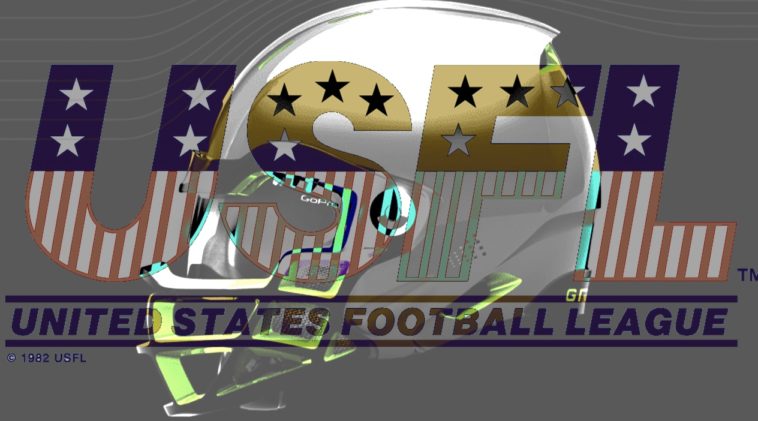 With Brian Woods announcing the USFL’s plan to return in the spring of 2022 it will mark the league’s second attempt at satisfying America’s appetite for football during a period typically devoid of our nation’s most popular sport.  Woods, the man responsible for launching “The Spring League” back in 2016, an eight team league which currently operates with games aired on FS1 and FS2 earning an average audience of approximately 166,000, announced last week that the legendary league from the 80’s would be returning next year with games being aired on FOX.  This will be the third attempt at cultivating a successful spring football league in the past four years.  Charlie Ebersol’s AAF (Alliance of American Football) burst on to the scene in 2019 and fell apart even faster due to lack of sufficient funds and was forced to file for bankruptcy halfway through their inaugural campaign.  A lawsuit filed by players and staff members claiming they were not paid continues to navigate its way through the courts.  WWE CEO Vince McMahon resurrected the XFL in 2020, the second version of his defunct 2001 league that lasted for only one season.  McMahon backed the league with a hundred million of his own dollars to help ensure stability and success.  XFL 2.0 looked to be showing some promise averaging around 1 million viewers weekly by midseason.  But around that time the Coronavirus arrived in the states causing the league to shut down operations, and with no revenue coming in they too eventually filed for bankruptcy.

The Spring League began as more of a camp than a league giving prospects the opportunity to come showcase their talents and put some stuff on film for NFL teams to potentially get a glimpse of.  As it has grown over the years it has developed into an eight team league, however the teams are not affiliated with cities; they are known only by their nicknames.  Currently the league is split into two divisions, the north and south.  All northern division games are played at Lucas Oil Stadium, home of the Indianapolis Colts, while all southern division games are help at Rice Stadium, home of Conference USA’s Rice University Owls.  Which leads to the question, is this USFL 2.0 simply the next evolution of The Spring League, or is this something different altogether with The Spring League remaining as is?  Will these existing teams be moving into new cities that they will call home?  Will there be additional teams or will we only see eight?  At this point we have far more questions than answers.  Woods did tell us though that the USFL has retained the rights to the original league’s team names and logos from the 80’s meaning we could see a return of the San Antonio Gunslingers and New Jersey Generals!  The USFL will certainly be the beneficiary of good ole’ nostalgia if nothing else!  And if there is anything the AAF and XFL taught us it is that the hunger for spring football exists.  Their respective leagues did not fail due to lack of fan interest, evidence that with proper planning and funding a spring football league could succeed here in America.

The original USFL debuted in 1983 with the goal of filling in that gap in the Springtime when the NFL and college football seasons have ended leaving their audience’s interest at its peak without any more content to consume.  The league attained a level of respectability right off the bat after the signings of some high-profile college stars such as Reggie White, Herschel Walker, Steve Young, Doug Flutie, and Jim Kelly.  Offering them big time money to leave college early and come play professionally, something the NFL would not allow, gave the USFL a competitive edge they will not have this time around.  However, the league rushed to expansion adding six teams after the ’83 season taking them from 12 to 18.  This was not sustainable given their television contract (ABC and ESPN paid $13 million for the broadcast rights for the first year), and after their second season the league went back down to 14 with some teams merging with one another and others disbanding completely.  Finally, after playing three wild seasons of spring football that did feature an exciting on field product, the owner of the New Jersey Generals, one Donald Trump, led an effort to move the league to the fall to compete for television revenue and potentially force a merger with the NFL.  Trump was also able to convince the USFL’s owners to file a lawsuit against the NFL, accusing their rival league of monopolizing football on TV during the fall.  They won the suit and were awarded three dollars.  The league was done.

What this version of the USFL will have going for it is that the craving for football in America has never been stronger.  Social media has made it so content is king.  New streaming services are popping up left and right and are searching for material to fill space, asking themselves what type of content will make them unique and separate them from the competition.  The legalization of gambling has also helped increase the popularity of sports in America with college football and the NFL being the most bet on by a wide margin, presenting the USFL with a unique opportunity.  Casual fans turn into die-hards when they have money on the line.  Think about all your friends who enjoy gambling on the NFL.  As the season goes on the intrigue grows.  They are placing more bets by the week.  By the time Super Bowl Sunday rolls around they have laid about twenty bets down on the game ranging from the length of the anthem to which team will commit the most penalties.  Then the game ends and…nothing.  Vast emptiness.  You don’t think the USFL is capable of stepping in and shifting the eyes of the gambling world on to themselves post Super Bowl?  In 2020 the XFL partnered with Draft Kings and also had an in house gaming app that gave fans the chance to correctly predict the scores of select games for cash prizes.  One of their main objectives was capitalizing on the growing gambling market in America to generate revenue and connect with their audience.  Unfortunately, because of the pandemic shortened season we were unable to see those partnerships materialize fully.  But as we come out of the fog of the pandemic people are determined to get back to normal.  Being without sports and being unable to attend games for so long left fans desperate, looking for anything to quench the thirst that we were all consumed by once the pandemic first shut down the NBA last March leaving us to place our bets on nothing but iRacing and Esports.  Only within the last few months have we seen fans begin to trickle back into stadiums and arenas, and with the influx of fans will surely come a surge in gambling.  It seems apparent that effectively capitalizing on the flourishing gambling market here in the States would be a great way for the USFL to connect with viewers, secure a following, and generate solid revenue, laying the foundation for sustainable success.

One of the biggest questions I have is how the return of the USFL will impact Dwayne “The Rock” Johnson and Dany Garcia’s version of the XFL.  After purchasing the league for $15 million last summer, the new owners announced a plan to return to play in 2022.  But in March of this year, it was revealed the XFL had entered talks with the CFL on a potential alignment, making it seem unlikely they would be playing games in the spring of 2022.  The CFL will return in August for the first time since 2019.  As far as what an alignment would look like, we know very little.  Dany Garcia recently stated a non-disclosure agreement had been signed by both sides, so we won’t have any more details until they want us to.  But for professional spring football leagues that have had trouble surviving in the past it seems a crowded marketplace would make it exceedingly more challenging to prosper.  One of the main obstacles these secondary leagues have had to overcome in the past is poor quality of play.  It is a difficult task finding talented enough players who aren’t in the NFL who are capable of captivating an audience, much less enough of them to fill an entire league…even more so two leagues!  The shortage of talent generally results in a boring on field product driving fans away and killing revenue.

So what can we expect to be the outcome of all this?  Will the CFL and XFL merge and become one similarly to the NFL AFL merger of 1970, or will their conversations result in a different form of an alignment?  Will they determine that an alignment just is not feasible and talks amount to nothing?  What will the USFL look like in 2022 and what cities will have teams?  There are more questions than answers right now.  Not much to do but wait and see. In the meantime, Go Hawks!