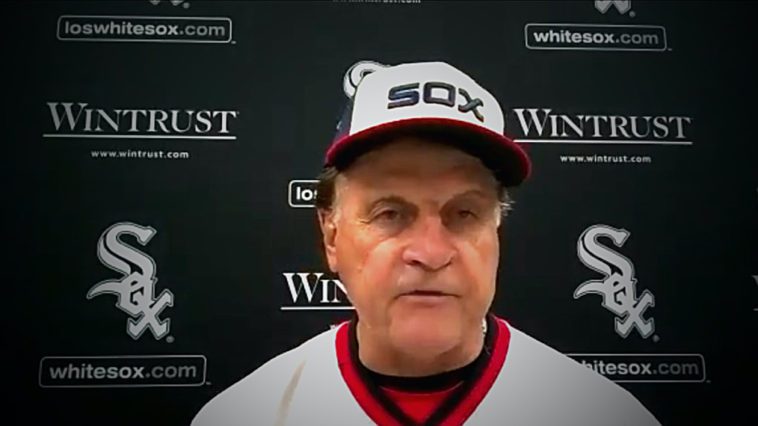 Pretty much on queue for the 2021 White Sox season, Tony La Russa has once again made the story about himself.  Ever since being hired (controversially, depending on who you ask) back in the fall, La Russa has seemingly been walking a tight rope between being a tactical upgrade, yet having the question of whether he can fit with this “Change The Game” team.

Back when he was first hired, this is one of the major downsides I had written about:

A fair criticism is how he will fit with this team, something that has been well documented and voiced by the fanbase.  Mixing an old school manager with a young, “Change The Game” minded team is a potentially explosive mix that can’t be ignored.  Him describing Fernando Tatis Jr.’s 3-0 Grand Slam  as “unsportsmanlike” stands in pretty steep contrast from how this White Sox team, Tim Anderson in particular, operates.

Of all the concerns regarding this hiring, this is easily the most potentially fatal, one that could alter the identity of the team.  If La Russa can mold his style to fit the flair of this group, this team will be in a better place to succeed.  If not, there will be problems, that is certain.

While this was almost certainly a tactical upgrade on the field (on paper), introducing such a big if to a team ready to compete was always going to be an issue if the Sox-TLR partnership didn’t result in a title.

And while there had been some on field mistakes, until just this week the “Can Tony La Russa fit with this team?” narrative had stayed quiet, at least publicly.  Then, Monday night, along came Yermin with a 3-0 count against Willens Astudillo, he of the 45 mph eephus, in a 15-4 ballgame:

While it seemed innocent enough at first, a 3-0 swing for a homer in a blowout certainly was apt for an unwritten rules discourse that none of us truly wanted to have (AGAIN).  And while silence was mostly what came out of the White Sox clubhouse for most of Tuesday, I had held out hope that there wasn’t any internal opposition to Yermin playing his game.

Well, unfortunately my wait and see approach with Tony La Russa did not pan out, and he reacted exactly as I should’ve expected.

Tony La Russa called Yermín Mercedes' swing on the 3-0 pitch a "big mistake." He said he was on the field screaming "take, take, take" and that Mercedes missed a take sign.

"There'll be a consequence that he'll have to endure. … It won't happen again."

La Russa: "Yeah, of course I talked to him about it. It's a learning experience. Made a mistake. I actually apologized to the Twins. I sent a message over there, (said that) it's not acceptable. And I'm certain that it will not happen again with Yermín."

There’s basically two things I felt about the initial pregame La Russa statements, which I summed up on twitter.  First, if Yermin missed a take sign from a coach, that’s fair.  That’s a direct play call from the coaching staff he ignored, and most teams would likely have some sort of internal dialogue to handle that.

However, in my opinion, this string of words from Tony La Russa goes beyond that quite clearly.  If it’s about a missed sign, he could’ve said “I appreciate Yermin’s passion and don’t have an issue with a 3-0 swing.  The issue in this specific situation is that he was given a take sign.  We’ll handle that aspect internally”.  Boom, just like that it’s over.  No apology to the Twins, no yearning for the golden days of unwritten rules, none of that.

But instead, TLR decided to rake his best hitter through the coals publicly, going so far as to call a 28 year old rookie who’s worked his ass off to get to this point “clueless”, and saying he shouldn’t play his game.

La Russa on Mercedes: "The fact that he's a rookie and excited helps explain why he just was clueless. But now he's got a clue."

Blowing off a sign is something that should be addressed, but there’s a way to do that internally, without making a national story via the press.  If this were truly only about signs, then we would’ve heard more about Yoan Moncada blowing through a stop sign at third last Sunday.

Ignoring a sign is bad but the manager doesn’t apologize to the other team when a sign is ignored (ie Tony didn’t make a fuss or apologize to KC for Moncada blowing a stop sign). That’s not what this is about and if you don’t see then you’re covering your eyes

When I first planned on writing this blog post, I figured this would be the crux of the post. But wait!

If that sounds like a manager that doesn’t support his players publicly, it gets worse!  During the game, all seemed quiet on the Yermin front until the 7th, when Tyler Duffey threw just behind Yermin on an 0-0 count.  A situation, I may add, the umpires immediately took control of, tossing Duffey after a brief conversation to prevent escalation.

For all the crap umpires have taken this year for strikes, missed calls, etc., I give them credit for handling this immediately.

I wish I could say the same about the manager of the team that had a player targeted.

Tony La Russa on the Twins throwing behind Mercedes: "I wasn't that suspicious. I'm suspicious when someone throws at someone's head. I didn't have a problem with how the Twins handled that."

La Russa: "What did they do? He tried to get a sinker in. You don't read minds. I'm not going to read their mind and I also don't second guess the umpire when its his judgment. If the ball is thrown at someone's head you don't give them the benefit of the doubt."

Look, if there’s not clearly some sort of intent there, the umpires aren’t tossing Duffey immediately.  Even worse though, is the fact that a major league manager publicly does the opposite of defending his players, going so far as to say that the opponent was in the right.

I’ve tried to be fair with Tony, given his track record of success in the big leagues.  Not many have done it as well as him, and that deserves respect.  But you can’t have a manager speaking PUBLICLY ON THE RECORD like this.

To make comments internally is one thing, but to make the conscious decision that you are going to use the platform of your postgame presser to defend a rival over your own player publicly is a cardinal sin in leadership.  If I’m a player on this White Sox team, I don’t know how you come back from that.

Clearly, a chunk of the players feel that way, between social media posts from TA/Yermin and postgame comments from Lance Lynn.

"If a position player is on the mound, there are no rules. Let's get the damn game over with. And if you have a problem with whatever happened, then put a pitcher out there."#WhiteSox

The drama continued then into Wednesday, reaching a third act where Tony La Russa doubled down on these takes yet again.  Most notably, though, was Tony seemingly picking a fight with Lance Lynn, perhaps one of the players that started the year with the best relationship with him (peep Marcus Stroman clowning the Sox here).

I’m riding with Lance Lynn all day. TLR is stuck in the past. Life is about adapting and moving forward!

Despite the endless arguments and the worse and worse double downs, we continue to go down this rabbit further and further, with the risk of further alienating the clubhouse getting larger and larger.  From a fan’s perspective, it’s exhausting.  I can’t even imagine what this is like for the front office or in the dugout.

I’ve always argued that the importance of a manager is almost more heavily concentrated on how they manage a clubhouse over a 162 game grind of a season over simply X’s and O’s.  And if this type of public chastising of players is happening 40 games in with Tony La Russa, I don’t know what this is going to look like come August.  Leadership matters, and this won’t get it done for the next 5 months without a change in style or person.

The thing is though, Tony isn’t going anywhere.  We all know why he got hired here, and who in the organization he actually answers to.  You don’t hire a friend to right a wrong for your broadcaster firing them 35 years ago to fire them again.  Let alone when they’re a few weeks away from getting to second place on the all time manager wins list.

Not to keep beating a dead horse, but TLR is like 15 wins away from passing McGraw for second all time in manager wins. I’d fashion a guess there’s 0% chance he’d either walk away or come to some agreement with Jerry to leave until after he gets there

The last aspect is that I don’t understand where this Tony La Russa came from.  The Tony La Russa of old was the last guy to lay down and not defend a team for going after his guys. If someone went after one of his players, he wasn’t going to stand for it.

Sure, it’s old school, but if you’re going to take that attitude you need to, at the last, defend your players.  This isn’t the same guy at this stage of his career, which even further raises the question of why the hire was made.

The best case scenario for the White Sox and Tony La Russa is that this just goes away, slowly fizzling the mutiny narratives with wins.  I would say best case is Tony changing his ways and embracing the way these players play, but we all know that won’t happen now.  For this year, wins will have to do.

For the sake of this team, Tony’s legacy, and all that, I hope he’s able to figure it out with what’s left of this season.  I’ve stayed hopeful and patient, but that’s slowly fizzling out.

Until that time though, this drama in the manager-team arranged marriage just keeps getting more and more tiresome.  The real tragedy is the focus being taken away from what arguably the most talented White Sox team ever is accomplishing on the field.