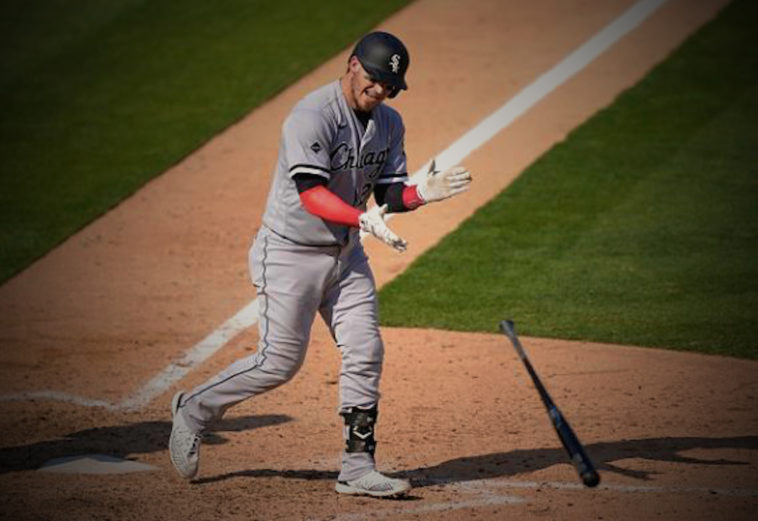 With the White Sox sitting pretty in first place after sweeping the Royals, the 2021 season has overall had more bad than good.  From Carlos Rodon’s no hitter, to the newest devastating injury to Luis Robert, to Tony La Russa shaking the rust off, there’s definitely been no lack of peaks and valleys thus far.  However, one aspect of the 2021 season has been more perplexing than any other.  I’m of course talking about the curious case of Yasmani Grandal and his absurd, Moneyball fueled slash line.

The subject of much discussion on this week’s Shoeless Goat Podcast between Nick and myself, Grandal has polarized most of the White Sox (twitter) fanbase, with few taking a vocal middle road. Even former White Sox player and manager Ozzie Guillen has weighed in plenty, making his stance known rather publicly.

really? really? he score when he walk ? omg all that money for that garcias score more run than him u guys better erase that https://t.co/SP4k4qGb9w

It really all comes down to the great On Base Percentage v. Batting Average debate, with his slash line taking on perhaps the most extreme split in those two measures.  Are walks the same as singles?

In the last 7 days Yasmani Grandal is slashing .083/.586/.083. The batting average folks are FUMING pic.twitter.com/Qd19jsJojv

While it’s fun to keep putting the “ON BASE GAWD who’s moved to a further plane of consciousness where swinging the bat is no longer needed” narrative out there, a lot of things can be true about how Grandal has played so far this year.  My simple way of evaluating his season so far is the following:

Every hitter slumps, but not many hitters can still get on base nearly 40% of the time while hitting around the weight cutoff for being able to carry the ball in pee-wee football (lifelong stripers represent).  That does carry value, and has certainly helped the White Sox to the best run differential in baseball thus far.

Still, you’d expect a guy with 25 homer potential to bring more pop to a team that desperately needs it this season.  The main question is, then, what has happened to Yasmani Grandal in 2021 to lead to this stark contrast in production?  To try to answer that, I’ll take a deeper dive into the numbers.

At surface level, Grandal isn’t doing anything much different than what he’s done in his career.  He’s walking more and striking out less, showing that he’s still picking up the ball well despite the struggles with the bat.  And while he’s always been a sub-.300 BABIP guy, that .119 number in 2021 screams bad luck, to a degree.

From there, my thought naturally went to looking at Statcast numbers, which on the surface showed some slight differences from his career marks.  Mainly, his average exit velocity and hard hit/barrel rates were up (surprisingly enough), but launch angle was down.

2021 data is a small sample size, of course, but this logically makes sense with what seemed to be taking place visually for Grandal – a lot of ground balls that weren’t finding a hole.  When it comes to the batted ball profile, this holds up.

Grandal is hitting grounders over half the time in the young season, with that drastic increase almost exclusively getting taken from his career line drive rate.  Read that however you want, but to me it’s hard contact that is slightly being missed with the bat on top of the ball instead of on the nose.

At a more granular view, the rate at which he’s topping the ball is the most drastic change in contact type, which, again, supports the ground ball influx.

Logically, this makes sense – if you’re being shifted against with fielders put into optimal position to handle grounders, and you’re hitting more grounders than ever before, your production is gonna take a hit.  At that point, it could devolve into a chicken or the egg question, but (in my opinion) the grounders are what’s driving that, not the other way around.  He may be shifted against as a left handed hitter more now, but the difference really is slight compared to 2020 and 2019.

Taking a look at pitch types, the biggest change from previous years is on offspeed pitches, with a sharp increase in grounder rate from both sides of the plate.  For every pitch type against right handed pitching though, those ground ball rates are the highest they’ve been in at least 6 years.

These shifts could simply be related to that knee injury from Spring Training, both in terms of physical ability and timing after missing time to see pitching live in Spring Training.  Not trying to play player psychologist, but that may make sense given the lower swing rates and historic desire to walk through one month into the year.

You don’t necessarily need to time up pitches for contact or physically guide the bat through the proper path to distinguish balls and strikes, you just need to be able to see them, after all.  Hitting a baseball is incredibly difficult, and timing being off in the slightest can lead to a line drive becoming a ground ball.

All in all, it doesn’t appear there’s a sudden change in ability or how Grandal is seeing pitches.  He’s hitting the ball hard, just into the ground more.  He’s clearly seeing the ball fine, since you don’t walk 30% of the time if that’s not the case. He doesn’t look lost at the plate, and pitchers would be dropping in 58 foot curves against a ballooning strikeout rate if he were.

My bet would be we see the numbers approach those career marks for power, average, and walks, but with this less swing/more walk approach lasting a bit longer.  If that were to change, it would be a clear sign the timing is there and the knee is fully recovered.  To make a run in 2021, the Sox will need it, especially once some of the rest of the offense cools off.