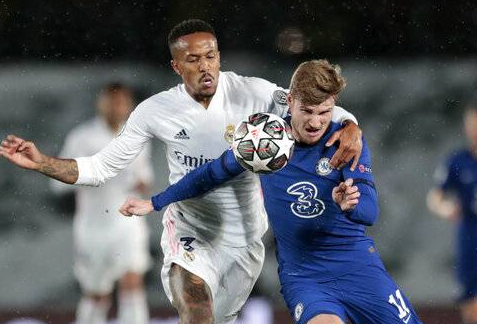 Soccer fans around the world will turn their attention to London, England on Wednesday evening at 8pm local time.  This is what some clubs wait decades for… the opportunity to play in a European Cup final.  This time around, we have Real Madrid, the kings of the competition, versus Chelsea, who are looking to reach their first final since 2012.

Chelsea dominated the first leg, and are surely kicking themselves for not scoring 2 or 3 away goals.  Real Madrid were able to level the game through the brilliance of Karim Benzema, and will need him to deliver again in leg 2.

Chelsea should field most of the same players in their xi as in the first leg.  There is talk about Havertz replacing Werner, but I think that would be a mistake.  Werner has incurred criticism all year for his lack of goals and poor finishing.  While that is a valid knock, he actually leads the Blues in assists and has pace to create chances for his teammates.  Kante is the key man for Chelsea.  He was the best player on the field in the first leg.  He must bring that same level of intensity for Chelsea to go through.

Real Madrid barely held on in leg 1, but they did just enough to have a great chance to make it to the final.  Real Madrid must score in order to go through, as a tie will see them go out on away goals.  Due to injuries, Madrid did not have their best xi in the first leg.  Going into Wednesday night, their injury issues have lessened significantly.  Sergio Ramos is back in the squad, and figures to start alongside Eder Militao, who has been fantastic.  Varane would normally get the start, but he has a minor muscle injury that may see him miss the match.  No matter which central defenders start, Madrid will be in good hands.

In the second leg against Liverpool, Ferland Mendy and Fede Valverde played LB and RB.  Neither played against Chelsea last week  If Mendy passes his fitness tests prior to the game, he is an absolute must start. Valverde may not get the start, but he is the best substitute on either bench and will have a significant impact on the game if he is fit to come on in the second half.  Kroos and Modric were rested at the weekend and will be fresh and ready to boss the midfield alongside Casemiro.  Zidane must play Eden Hazard alongside Karim Benzema up front.  They link well together and Hazard is too skilled to sit on the bench, despite his lack of minutes this season due to injury.  There are multiple options for the third spot upfront.  I think the best two options are Valverde or Vinicius.  Vini’s pace is a huge weapon, despite his less than stellar finishing record in the final third.  If Valverde is fit, Zidane could be tempted to add a fourth midfielder as Valverde is superb at driving play forward. Pending game time injury decisions, I think the best Madrid starting xi is as follows:

This Chelsea team is phenomenally compact and well organized.  They will not give up easy chances.  Madrid will have to work hard to get chances on goal, but they are better at converting than Chelsea.  Chelsea will be patient and pick their chances primarily on the counter attack.   I think the outcome hinges massively on which players are fit to start for Madrid.  If Real can field players like Ramos, Mendy, and Valverde, I think Madrid goes through.  If it is a squad similar to leg 1, it’s a toss up and I give a very slight edge to Chelsea.  Luckily for the royal whites, this week has brought only positive injury news and all the key players that were previously missing, look set to return.  With that in mind, I predict Real Madrid 2 – Chelsea 1.  Karim Benzema to score at least 1 goal.