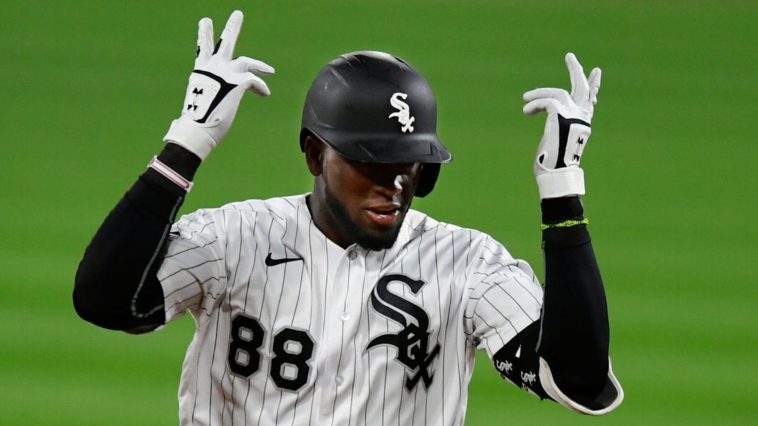 In what has been a frustrating yet ultimately successful season so far, the last thing the White Sox needed was yet another major injury blow, especially not to their outfield.  Yet that’s exactly what they got, in the form of Luis Robert suffering a strain of his hip flexor while trying to beat out an infield hit in the first inning of Sunday’s game.

X-rays are negative and he will be further evaluated tomorrow.

While it seemed much worse on video, this initially seemed to be a cause for relief that his injury wasn’t something more serious.  After all, a quick google search made it seem like Luis Robert may only miss 6ish weeks, a sentiment that led to me not fully panicking in this week’s Shoeless Goat Podcast.

And then everything changed – first with the never-good cryptic 5 pm on an off day press conference from Rick Hahn, and then in the actual news he delivered:

Luis Robert was examined today at Rush and a scan showed a grade 3 strain (complete tear) of the hip flexor. Further consultation and examination in the coming days will determine if surgery or rest and rehabilitation is needed for recovery.

Talk about an absolute gut punch on a Monday night, 3-4 months before arguably the most exciting and most talented player on the team can even begin baseball activities.

While not as devastating in terms of timeline as a serious knee injury, losing Luis Robert for what is likely the remainder of the 2021 season is an enormous blow. Right in the middle of the contention window, two of the White Sox best hitters are almost certainly out of the lineup for the year, leaving a void in production that will be incredibly difficult to fill.

Not only that, but Luis Robert’s incredibly strong 5 tool profile at 23 years old is one you don’t see too often, and it’s a shame for him, White Sox fans, and the sport as a whole that we won’t be able to see what he can do in his sophomore season.

The hope moving forward is that this is a few month ailment, with no long term effect to Luis Robert’s game.  This is obviously premature, but I really don’t need another D Rose/Mickey Mantle what if story.  Just like the Kopech injury before Eloy’s it’s just another cruel twist of fate in this rebuild.

12 years of no playoffs in a 162 game year, zero playoff series wins since 2005, two major rebuilds, all the hype, and then this. Jesus Christ man

The overarching feeling right now is obviously doom and gloom, but I’ll try to keep everything in perspective on the day after to see where this leaves the Sox.

Where the injury to Luis Robert leaves the White Sox

Not well, to be it simply.  While losing Eloy Jimenez was arguably the bigger blow to the offense, finding ways to fill the gaps in production for Luis Robert is much different.

Eloy’s bat was irreplaceable, but you have a capable offensive player in Andrew Vaughn to take reps in left to cut the gap.  Plus, virtually any player will give you a net gain on defense, especially when a still-learning Vaughn is supplemented with a plus-defensive player like Billy Hamilton.  Yes, the bat is missing, but with Vaughn’s ascending skillset and a net gain on defense, you can change the calculus to make up the lack of Eloy’s WAR with good offense and any defense.

When it comes to Luis Robert, it isn’t that simple.  With him, there’s just too much to replace.  Even with only one homer thus far in 2021, Luis Robert was on pace for a 7.1 fWAR season over 162 games (1.1 in 25).  This production comes from his extremely rare overall skillset – top flight power and the ability murder the ball, top tier speed, and Gold Glove caliber defense that is backed statistically as some of the best in the league.

On top of all his stunning physical feats, Luis Robert is among our top rookie Statcast performers of 2020 for his defense: https://t.co/H0OBzMz7am pic.twitter.com/y6Oa05dnpH

Plus, the biggest hole in his game, strikeout/whiff rates, are both down considerably this year, showing improved discipline that could take his already lethal offensive game to the next level.

What I’m trying to say overall is that with Luis Robert, there’s too much to try to replicate.  Even if he doesn’t hit, he’s a 2-3 WAR guy based on his defense alone.  It’s pick your poison in trying to fill that gap, and with Adam Engel, a good option to cut into that defensive gap, out for at least three more weeks before a rehab assignment, the internal options are incredibly thin.

Adam Engel had a setback with his rehab so the team said they are back to square 1 in term of his return. He is progressing but 3 weeks away from beginning a rehab assignment.

Where Do the White Sox Go From Here?

At least to start, the options have to remain internal, which leaves a lot to be desired.  I’m not delusional, so while no team in baseball has the depth to fully replace Luis Robert’s production on top of Eloy Jimenez’s, it would be nice if the roster were constructed in such a way to minimize the losses.  Realistically, I’d be talking about moves that could keep a 96-ish win ceiling team with those guys at around a 91-92 win ceiling without.  That should still get you a playoff spot, be it in the division or wild card.

When you stock the top of your outfield depth chart with three guys with injury histories you’re playing a risky gambit as it is.  The fact that we’ve seen the worst case scenario already play out by end of business on May 3rd is just fitting.

Now, back to that depth chart.  While Adam Engel, a slightly plus hitter based on 2020 with similar Gold Glove caliber defense, is certainly good depth, he’s not available right now.  Left field seems fairly obvious moving forward.  While Tony La Russa has wanted Andrew Vaughn to “earn” every ounce of playing time, the converted first baseman has the best bat, by far, of any internal options to cover that missing ground from Robert, and thus needs to play every day.

The Luis Robert should be, and I hope will be, the end of the Andrew Vaughn playing time controversy.  His service time is already burned, it’s time to make the most of it.

In center field, things are a bit more dicey.  Do you go with super utility player Leury Garcia, extremely known quantity Billy Hamilton, or try out someone like Luis Gonzalez?

Luis Gonzalez will be coming up as it sounds per La Russa.

While I may lean towards seeing what the offensive upside of Gonzalez may be, we have to keep in mind what the role of this player will be, and who’s writing the lineup card.  Realistically, this player’s primary assignment will be to cover ground in center to make up for Vaughn’s lack of experience in left.  Whatever they can give you on offense in the 8th slot is a bonus.

Comparing Garcia and Hamilton’s profiles and career body of work should make this choice fairly obvious:

While it’s not a choice this team should be having to make in 2021, Billy Hamilton should be the easy option to start in center until Adam Engel returns.  Imagine thinking that back in February.

From there, it’s anyone’s guess.  I’d love for Rick Hahn to fleece a team to get the likes of Joey Gallo, Kris Bryant, or Charlie Blackmon to cover for Luis Robert, but it likely won’t happen.  The Sox don’t have the prospect capital depth to really pull off a godfather trade, and they aren’t going to get a discount from anyone.  More likely than not, any outside additions will be closer to a depth guy, if any are acquired.

Perhaps a free agent like Yoenis Cespedes could be the answer, but there isn’t anyone who can give you a good chunk of Luis Robert’s skill set just sitting around.

The next few weeks will ultimately be pivotal for the 2021 season, a “win now” year that was accentuated by trading off 6 years of a prospect for Lance Lynn.  If Moncada can look like the 2019 version of himself, Tim Anderson continues to soar, Jose Abreu gets closer to the 2020 version of himself, Yasmani Grandal starts to hit anything, Nick Madrigal stays around .300 and doesn’t miss the ball, Yermin Mercedes remains the real deal, and Andrew Vaughn keeps growing, then this team should be a playoff team come year end.

That’s still a scary good lineup, with surprisingly good starting pitching.  If the bullpen turns it around and things with Tony La Russa start to click?  Still in good shape.

The bigger issue is that these are a lot of ifs.  The margin for error, or whatever was left of it after Eloy’s injury, is basically down to zero now with Luis Robert out.  Just how well this team can cover will be the story of the rest of the year