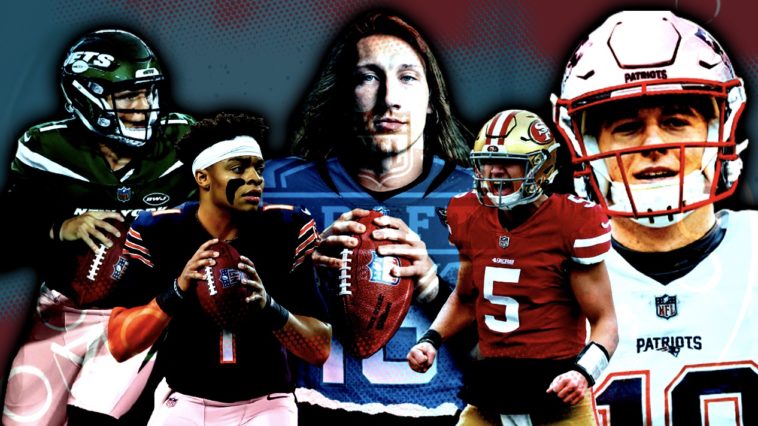 The “Year of the Quarterback” is always a popular catch-phrase this time of year. Once again, it was basically true… The 2021 NFL Draft consisted of 5 QBs going in the 1st round. Here is how it shaped out:

Lawrence finished with 10,098 yards, 90 TDs and 17 interceptions at Clemson. He won the national championship in 2018 and was the Heisman runner-up last season. He is projected to go No. 1 to the Jacksonville Jaguars.

Wilson passed for 7,652 yards, 56 TDs and 15 INTs at BYU the last three season. He finished eighth in the Heisman voting last season. He is projected to go No. 2 to the New York Jets.

“This is Zach Wilson, and you’re watching Disney channel” pic.twitter.com/wz828qc0WG

Lance led North Dakota State to an undefeated season and FCS championship in 2019. He passed for 2,786 yards, 28 TDs and no interceptions that season and rushed for 1,100 yards and 14 TDs. He is projected to go No. 4 to the Atlanta Falcons.

Fields passed for 5,373 yards, 63 TDs and nine interceptions at Ohio State during back-to-back College Football Playoff runs the last two seasons. He finished second in the Heisman voting in 2019 and seventh last season. He is projected to go No. 9 to the Denver Broncos.

Holy shit the Bears did the right thing. Traded up for QB Justin fields ? pic.twitter.com/XPHtCGKNNE

Jones led Alabama to a perfect season and national championship in his first full season as a starter. He finished his career with 6,126 passing yards, 56 TDs and seven INTs. Jones finished third in the Heisman voting. He is projected to go No. 3 to the San Francisco 49ers.

The Patriots get their QB in Mac Jones. Wow ? pic.twitter.com/vzihnFRIdm