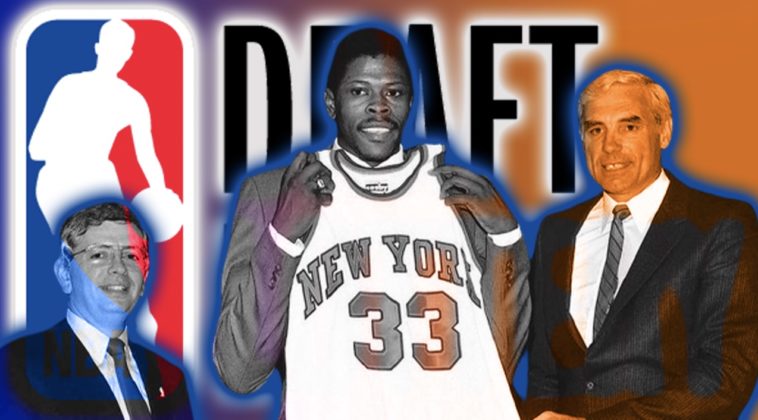 The New York Knicks, whom you may have heard, have been sending a good luck charm in the form of former franchise center Patrick Ewing as their team representative for the NBA Draft, especially when going after Zion Williamson a couple years ago.

Ewing was selected by the Knicks with the No. 1 pick in the 1985 NBA Draft, the first time a lottery was used to award the top pick. The fact that a generational talent such as Ewing landed in the league’s biggest market with a franchise in desperate need of a shot in the arm, as a result of the commissioner pulling an envelope out of a drum was, and remains to this day, a tad controversial.

But was it really a conspiracy?

Per SportsNet – Simply put, that then NBA commissioner David Stern conspired to rig the draft lottery to ensure the New York Knicks land the No. 1 pick and Ewing.

It’s worth noting that 1985 Patrick Ewing was every bit the college prospect that Zion Williamson is today. During his time at Georgetown, Ewing was a three-time consensus first-team All-American, two-time Big East Player of Year, a national champion in 1984 and the 1985 national college player of the year. He was everything an NBA team in the ’80s wanted in a franchise player: a seven-footer who could post, rebound, score and change games with his defence.

In other words, Ewing and New York seemed like a match made in NBA marketing heaven.

David Stern was a man on a mission

In the early 1980s, it was reported that the NBA had a serious drug problem, with estimates of anywhere between 40 and 75 per cent of players in the league using cocaine.

Stern, who had succeeded Larry O’Brien as commissioner of the NBA in 1984 was on a mission to get drugs out of the NBA, and NBA headlines.

One of the ways he attempted to do so was by introducing the draft lottery, a tool to not only prevent teams from tanking, but to create some buzz among fans and media. Maybe even advertising executives.

“There is a strong feeling among league officials and television advertising executives that the NBA will benefit most if he winds up in a Knick uniform,” wrote Sam Goldaper in a May 6, 1985 edition of The New York Times.

Stern, the Knicks and the NBA as a whole would benefit greatly with a Knicks lottery win.

The 1985 draft lottery was conducted using envelopes for each team that were then placed into a large plastic ball and spun before Stern pulled out the winner.

Conspiracy theorists will tell you that the envelope for the Knicks had a bent corner, possibly to identify it to Stern when pulling out the winner.

The most infamous 1985 draft lottery conspiracy theory of them all is the most fun, and perhaps not coincidentally features the least “evidence.”

As the story goes, the envelope that had the Knicks logo on it was secretly kept in a freezer right up until the moment all the envelopes were brought on stage, thereby allowing Stern to easily identify it among the pile in the drum.

On Tuesday, the fate of Duke star freshman forward Zion Williamson will be decided when the NBA’s Draft Lottery takes place in Chicago.

Hailed as a generational talent, Williamson could be just the ticket to revive championship aspirations for any of the 14 teams who failed to reach the playoffs this season, and therefore have balls in play Tuesday.

But how could they have rigged it?

This is where things get really fun, and silly.

Below: Take a quick look at this video to see how the 1985 draft lottery was executed:

Anything suspicious catch your eye? Nope? Well, a quick YouTube search of “1985 NBA Draft Lottery” will send you down quite the rabbit hole of ways in which some believe the NBA pulled it off.