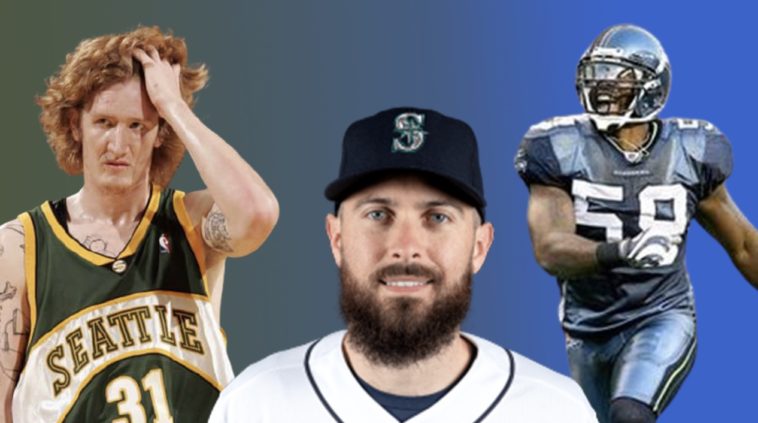 Seattle has had a ton of legends throughout it’s sports history. But not every player in Seattle sports history as turned out to be a home run. We’ve had some signings, draft picks and trades that were downright disasters in our three major sports franchises in our history. From the Seattle Sonics, Seattle Mariners, and Seattle Seahawks we compiled who we thought were the biggest disappointments in Seattle sports history on the most recent episode of PodThat with the Jarjour Brothers.

On the latest episode of PodThat the Jarjour brothers discussed the biggest disappointments in Seattle Sports History including Robert Swift and the Seattle Supersonics. Our co-founders & brothers, George & Sami Jarjour discussed on their lasted podcast, Episode 705 of Pod That, which can be played on Spotify below, or here for all other platforms:

Robert Swift was one of the last straight from high school to the pros prospects in recent NBA history. The center out of Bakersfield, CA was a downright disaster on and off the court and never developed into anything worth mentioning.

Former Sonic center Robert Swift talked with us about when he hit rock bottom. pic.twitter.com/ZWDMtZ6IhH

Vin Baker was part of the too much too soon era of the NBA. He was acquired for Sonics legend Shawn Kemp and despite making an All-Star team he was a major disappointment after signing a $80+ million dollar extension. He struggled with alcohol and drugs and never lived up to the contract.

The center basically was the moment you can point to Shawn Kemp wanting out of Seattle. He received a $30 million dollar contract and that rubbed Shawn Kemp the wrong way, leading to Kemp requesting a trade.

Another free agent center gone wrong. He came from Dallas to a $30 million dollar deal and it was a string of disappointments that left a wrong taste in Seattle fans.

One of the best LBs in college his attitude left scouts worried about his future NFL success. Spoiler alert, they were right.

This week in 1987, Brian Bosworth of the Seattle Seahawks in a game versus the Denver Broncos. #TodayInSports @GotBoz44 #SEAvsCHI #Seahawks #GoHawks pic.twitter.com/xkN0yVN9iw

1st round, 17th overall pick Dan was Brock Osweiler, standing at 6 foot 8, he never panned out.

Maybe the biggest bust in Seattle Seahawks history, the 2nd overall pick of the draft out of Notre Dame never managed to live up to expectations.

Only the Saints (1971: Archie Manning) & Cowboys (1989: Troy Aikman) have gone longer without drafting a QB in the 1st Rd in the Common Draft Era

The Wake Forest linebacker has become a solid coach for the Seahawks but was a bust as a player.

Problems off the field kept Stevens from living up to his potential.

Despite signing a massive deal in free agency as a defensive end from St. Louis, Wistrom managed only 11 sacks in his 6 year deal (that ended with him being waived before the contract ended).

There is a zero percent chance you will ever find a Seattle Mariners fan who likes Eric Bedard. He was jerk off the field to the media, and he never lived up to the hype of trading one of our best prospects in decades in Adam Jones.

Cliff Lee was a Cy Young award winner. But guess what? He didn’t do it in Seattle.

We were supposed to have a three-headed monster pitching staff with these three pitchers. Paxton, was the best of the bunch but none really became long-term rotation guys in Seattle.

Jesus Montero was supposed to be a once in a lifetime hitting prospect. And the guy could hit. The only problem? He could only hit in Triple A and he was fat.

Jose Mesa was good at one thing.. blowing saves.

Brother of Nomar never made the majors for the Mariners after being a 1st round draft pick.

Never bring a guy from the NL to hit for the Mariners. Aurilla once hit 39 home runs in a season, but that was as a Giant not a Mariner.

Almost a bit unfair here because he had some good seasons. But if you ask Mariner fans they all would agree.

The third overall pick of the draft never made any impact in the Majors.

He should have been a starter in Seattle and I think Brandon Morrow might have had a better career as a Mariner.

Chone (pronounced Shawn) was an MVP candidate for the Angels. He came to Seattle and had back to back seasons hitting under .200.

Another pitching prospect who never did diddly-squat in the majors.

Sorry for the bad memories because some of these names on the list can give any optimistic Seattle sports fan nightmares.