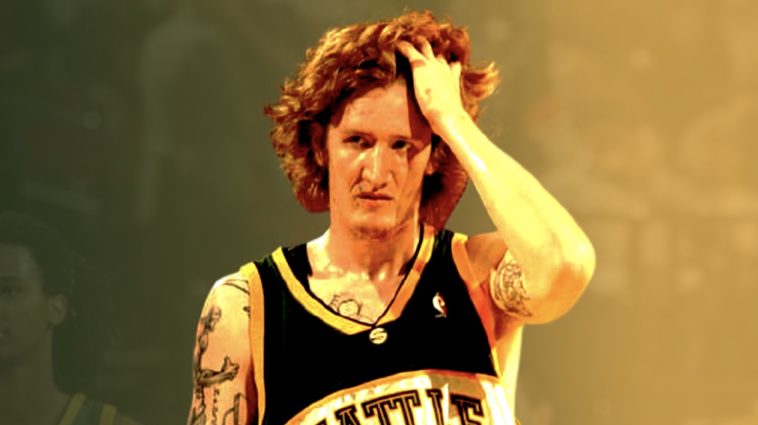 Robert Swift was a 7 foot 1 center who was supposed to be an NBA star coming out of his high school. And the Seattle Supersonics came in and drafted him with the 12th overall pick of the 2004 NBA draft. He was big and he was athletic and he was supposed to be the next big thing. But it didn’t quite work out that way. He had a short career that was awful. And a even worse time off the court.

On the latest episode of PodThat the Jarjour brothers discussed the biggest disappointments in Seattle Sports History including Robert Swift and the Seattle Supersonics. Our co-founders & brothers, George & Sami Jarjour discussed on their lasted podcast, Episode 705 of Pod That, which can be played on Spotify below, or here for all other platforms:

Swift went to three high schools and averaged almost 19 PPG, 16 RPG and 6 BPG. And of course this was while he was the attention of all defenses. After signing to USC on a full-ride he decided to go to the NBA instead. He was drafted by the Sonics and signed a $4.4 million dollar 3 year deal. Swift wasn’t ready to play. He only played 16 games his rookie year and and 47 games his 2nd year after injuring his knee. Then in his third season he tore his ACL. When he came back he tore his meniscus after 8 games. He only played 26 games the rest of his career.

Then the real problems began. Swift was generous with money. He gave money to all his family and friends. Then in 2009 he had a son and was foreced to pay $5,000 a month in child support. He began drinking, got out of shape and started a cocaine habit. He stopped paying his house and the bank foreclosed on it. And Swift didn’t want to leave. When the bank finally got a hold of his house there were bullet holes in the walls, maggots in the sinks and piles of dog shit everywhere. Swift left the house to live with his drug dealer and in 2015, Swift was arrested for armed robbery.

Robert Swift is just another reminder of wasted talent. But he has tried to get his life together.

Former Sonic center Robert Swift talked with us about when he hit rock bottom. pic.twitter.com/ZWDMtZ6IhH

We are Two Brother’s Talkin’ Sports!