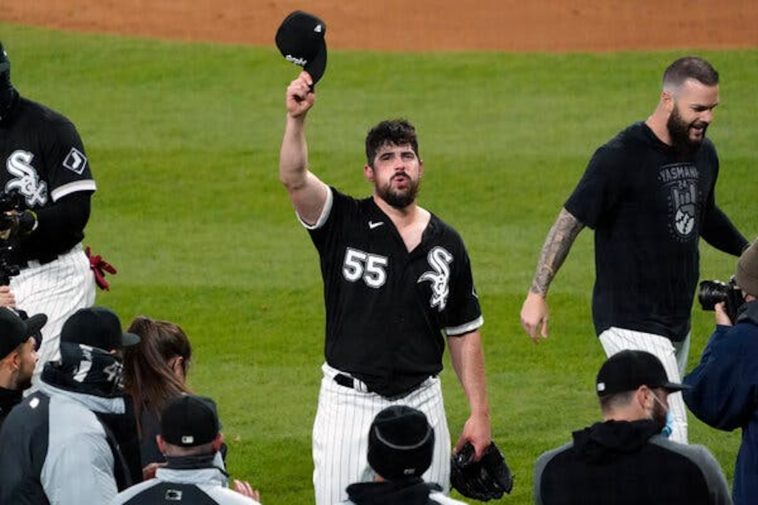 We’re not even a week into his reign, and Carlos Rodon has already usurped Joe Musgrove as MLB’s most recent no-hitter.  Hell, we’re not even a year out from the last White Sox no-no, when Lucas Giolito spun one of the most dominant games in recent memory.  Unlike last year, though, there is one big and noticeable difference – while not a full house, some fans, myself included, were lucky enough to be onsite to witness Carlos Rodon etch his name into history.

The final out. A spectacular night on the mound for Carlos Rodón! pic.twitter.com/xkYMaLR9vP

Or, for those of you who prefer a non-HD version of the above:

The last out from 509. That’s my god damn 5th starter #ChangeTheGame pic.twitter.com/YopFkTRBnS

The game, like any other no-hitter/near perfect game, was a master class on efficiency and shutting down the opponent.  Apart from a few balls that were tagged right at fielders, there were no answers.  He was cruising too, given how quickly I went from “man, it’s cold out” to “oh my God we’re through 5 and no one’s gotten on”.

While losing the perfect game on toe-gate was a brutal blow, we at least got the consolation prize.  When I got home from the game and watched the replays from the game, one thing about that hit by pitch stuck with me.

After losing his bid to join one of the most sparse groups in baseball, Carlos Rodon didn’t sulk, he didn’t complain, he didn’t blow up immediately after.  He laughed it off, got the ball back in his glove, and finished the rest of the job.  And that’s where I want to focus my thoughts here, the mental strength here from Rodon.

I’ll back track here for a second.  To consider everything that went into this no hitter, you really have to consider Carlos Rodon’s journey to this point.  From third overall pick, to accelerated ascent to the majors in 2015, to shoulder surgery, to Tommy John surgery, to being converted to a reliever in 2020, to being non-tendered.

The highs and lows are incredible, with more valleys than peaks in the last 2-3 years.  The wear and tear that places on a person is hard to calculate, but I think listening to the sound in Carlos’ voice in this clip is about as audible as a representation as you can get.

‘If it’s Tommy John, so be it,’ Rodon said. pic.twitter.com/csZcjZL6eN

You can cut the frustration with a knife.  At that point, the future was unclear, with yet another setback in a young, yet extremely unfulfilling career.  The clock was ticking, and after getting back from a major surgery to be right back there again is a hard pill to swallow.

All of that to end up on the mound at 35th and Shields last night, not even two years later.

Carlos Rodón of the @whitesox had Tommy John surgery on May 15, 2019. Tonight he threw a no-hitter.

He's the first MLB pitcher ever to throw a no-hitter within 2 years after having Tommy John surgery.

As someone who had their athletic career cut short by frustratingly repeated injuries/surgery after a long rehab, I’m a sucker for guys who can come back from this.  The grind of rehabbing an injury after major surgery is a brutal test of mental strength.

For a second time though, when you know exactly what you’re getting into, AND have to deal with the frustration of your first rehab basically becoming moot?  The doubt and fear of re-injury that comes around the second time is real, since any mirage of invincibility is gone.  That’s another level of tough that is incredibly draining, physically and emotionally.

It’s a long, lonely road back, and it’s the side of the journey most people on the outside never see.

Some of his journey does parallel with Lucas Giolito’s, which echoed in the no hitter.  Like Giolito, Carlos Rodon was a top level pick and prospect, and had gone under the knife.  Unlike Giolito though, Rodon didn’t re-establish himself as an all star.  He hadn’t had that mountaintop.  While we’d accepted the fact that Lucas Giolito was on his way to being a $200MM pitcher, Carlos Rodon was just trying to stay afloat in baseball.

All in all, my thoughts on Rodon go back to some words I wrote when he resigned with the Sox back in February:

“I do somewhat feel the anger against Rodon is in part to his late season meltdowns in the bullpen in Cleveland and Oakland in the playoffs, which were two incredibly deflating moments in the White Sox resurgent 2020 season.  In Cleveland, the air was taken from the sails and left the team limping into the playoffs, and Rodon’s appearance in Game 3 in Oakland was about as close to a dagger on the season as anything outside of Garrett Crochet’s forearm.

However, coming from the bullpen as a high leverage arm was a role he wasn’t really meant to be playing, and one he rushed back to fill.  The man wanted to contribute to a playoff team in anyway possible, and I won’t necessarily fault him for his manager putting him into situation he was unfamiliar with and was highly likely to struggle with.  The execution needs to be there, yes, but those two outings shouldn’t really paint what Rodon is moving forward.

The biggest thing about Rodon that will determine how well this reunion works is health.  When healthy, Rodon has been a decent-to-better option in the rotation.  He may have never lived up to that 3rd pick billing, but he’s at least performed at a level necessary for a back of the rotation/depth option.”

To address the first part, Carlos Rodon has always been a competitor.  The results may not have always been there, but there’s no arguing that he was always ready to answer the bell, when he was physically able.  In 2020, that resulted in him being a punchline and metaphorical dagger to the season, but the key thing is he was willing to contribute in any way possible.

If he didn’t let the injuries end his story in this city, he sure as hell wasn’t going to let that outing in Oakland end his White Sox tenure.  In this game you need guys with this type of fire.

Still can’t get over this. Thought his last moment with the Sox would be getting pulled after loading the bases in Oakland in Game 3. All the injuries, the non-tender, and here we are. Baseball is a hell of a thing. Carlos deserves it all https://t.co/3w0nnMDA5F

When it comes to this season so far, my projection for what Rodon is capable of has been about as far off as you can be.  Decent-to-better is about the understatement of the century, as far as a two game sample size goes.

Obviously, you aren’t going to see Carlos Rodon continue to pitch as a 0.00 ERA and 100% LOB rate for the rest of the year.  But, in just two games he’s already put up half of the wins above replacement he provided from 2019-2020 (0.5 vs 1.0).  Some of that is real, though – after all, he’s throwing his fastball harder than ever before in his career, and you can’t do that if you’re not feeling near your best.

Let's update that through the end:

It’s needless to say, but Carlos Rodon pumping 99 mph gas in the ninth inning of a game is much different than Carlos Rodon throwing low 90’s just two years ago.  This version, combined, with a devastating slider and a changeup he’s gotten a better feel for, is downright dangerous at his best and a damn solid pitcher on the other end of the spectrum.

If the Sox are getting a version of Carlos that lies somewhere between his career levels and this, this signing will be an absolute steal.  If he can stay healthy, even better.

But I’ll save the future for the future.  For today, and the next little bit, I’ll keep the important part of all of this in mind.  After being down for years, after battling his way back, Carlos Rodon has proved that he belongs.