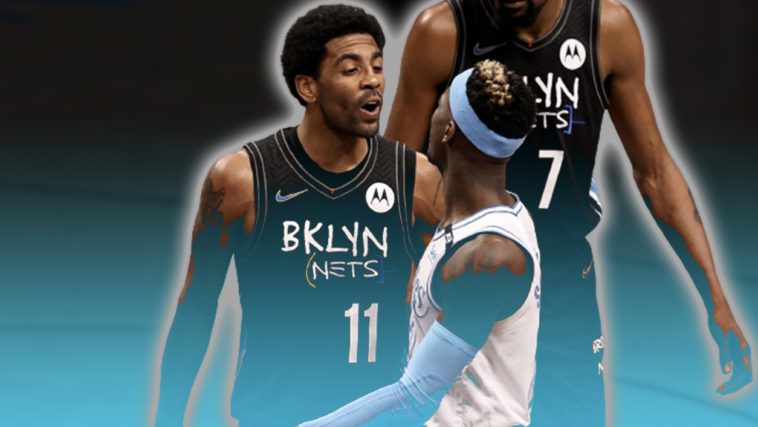 The Brooklyn Nets seem to be all over the news for everything but actually the game of basketball. Injuries, trades for superstars, and of course, Kyrie Irving always being mad about things… This time you might actually lean his way though.

The Brooklyn Nets surprisingly GOT BLOWN OUT by the shorthanded Los Angles Lakers in a heated game on Saturday. Without LeBron James, Kyle Kuzma, or Anthony Davis in the rotation, the Lakers reserves were able to cap off a 126-101 win over the Nets. However, during the game both Kyrie Irving and Dennis Schroder were ejected, causing a stir of unsettlement across the NBA.

Kyrie spoke out on the anger that happened during the game, and why he is NOT okay with Schroder saying the N-Word to him.

The N-word is a derogatory racial slur!
It will never be…
-a term of endearment
-reclaimed
-flipped
NEVER FORGET ITS FOUL AND TRUE HISTORY!
Throw that N-word out the window, right alongside all of those other racist words used to describe my people.

We are not slaves or N’s

If you know me, or this website in general, we try to speak the truth at the Sports On Tap, and I must say one thing… Kyrie did follow up by using the word towards Dennis Schroder as well… So this is where a lot of my confusion lies with Kyrie, while I still get why he doesn’t like the word being used towards him of course.

The derogatory racial slur still holds a lot of meaning and has a dirty history. Kyrie Irving has stopped using the word altogether, as he believes it should be thrown “out the window.”

Schroder is known to be a fiery competitor, but for Kyrie Irving, Schroder’s words were over the line. We’ll see how Kyrie Irving bounces back, as the Nets are fighting for first place in the Eastern Conference.