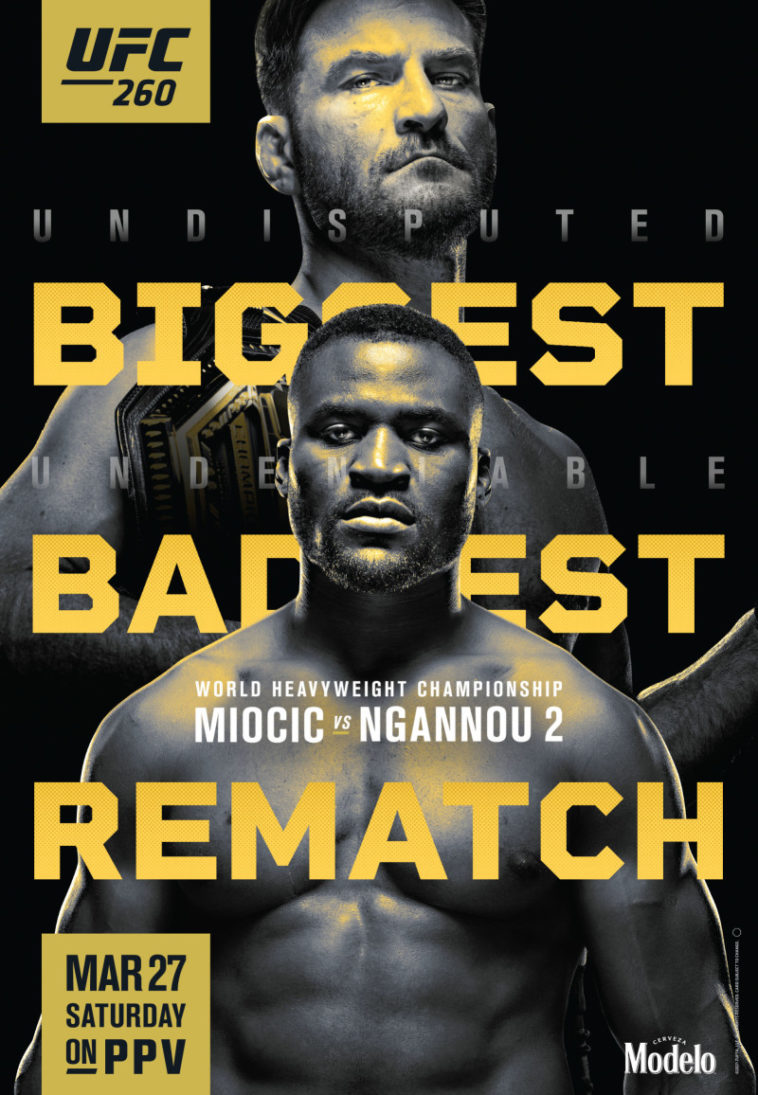 It’s Saturday, you know what that means. The UFC is back and LIVE on PPV tonight starting at 6:30 PM. UFC 260 originally promised us 2 title fights, unfortunately the Featherweight Title Fight between Alexander Volkanovski and Brian Ortega has been postponed to a later date because of COVID protocols. Fortunately we still have the big boys holding down the main event. Miocic/Ngannou 2, a rematch almost 3 years in the making. Franic Ngannou gets another chance at gold against the same man who took him down in a 5 round war. Should be a great rematch. Not only is there Miocic/Ngannou, but we also have former champ Tyron Woodley essentially fighting for his UFC career in the co-main event against Vicente Luque. Not only that, but the  “Sugar Show” graces us with his presence and his whacky hair as Sean O’Malley makes his return off of his first loss of his career against Thomas Almeida.

Without further ado lets get to the fights. 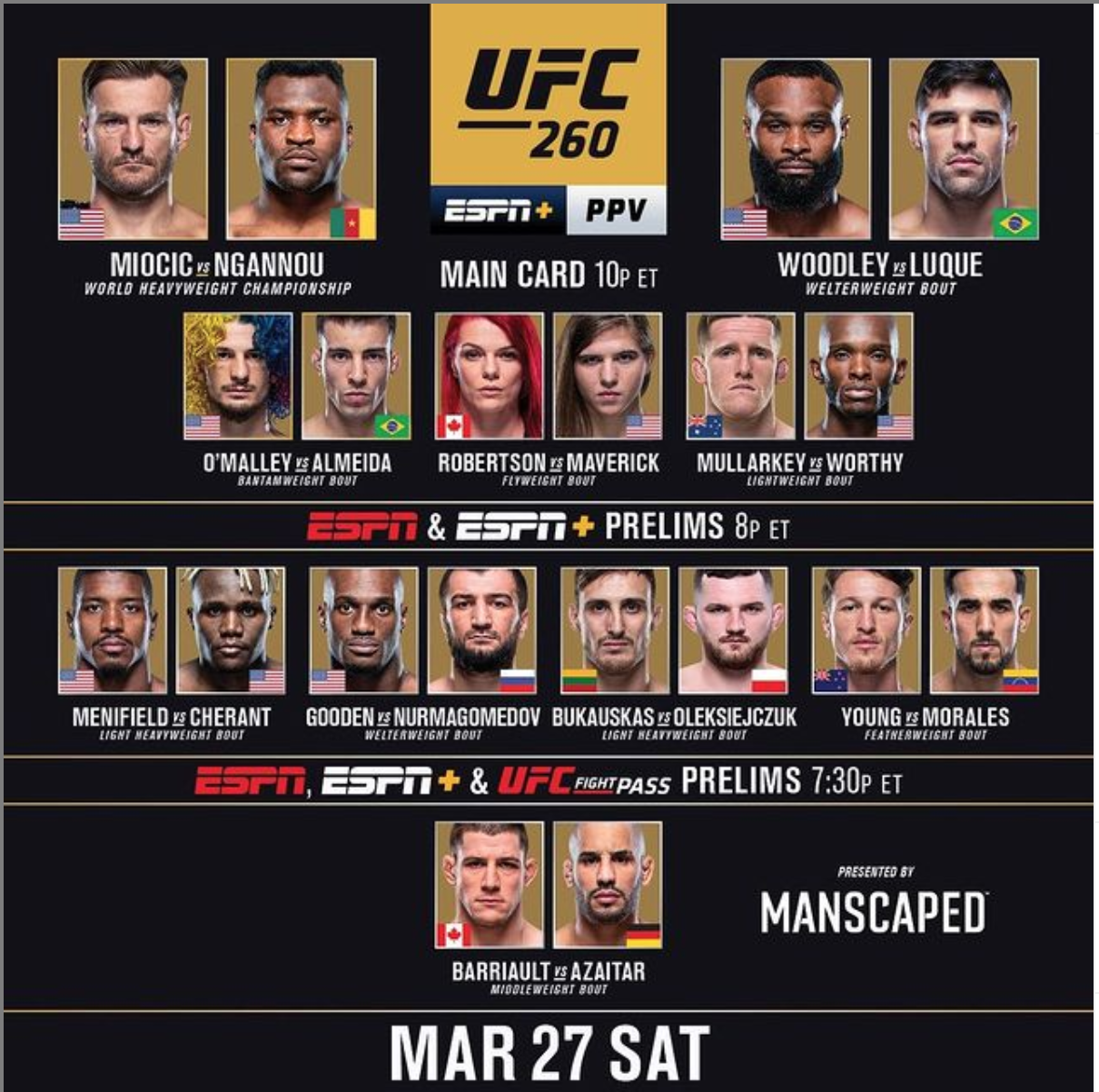 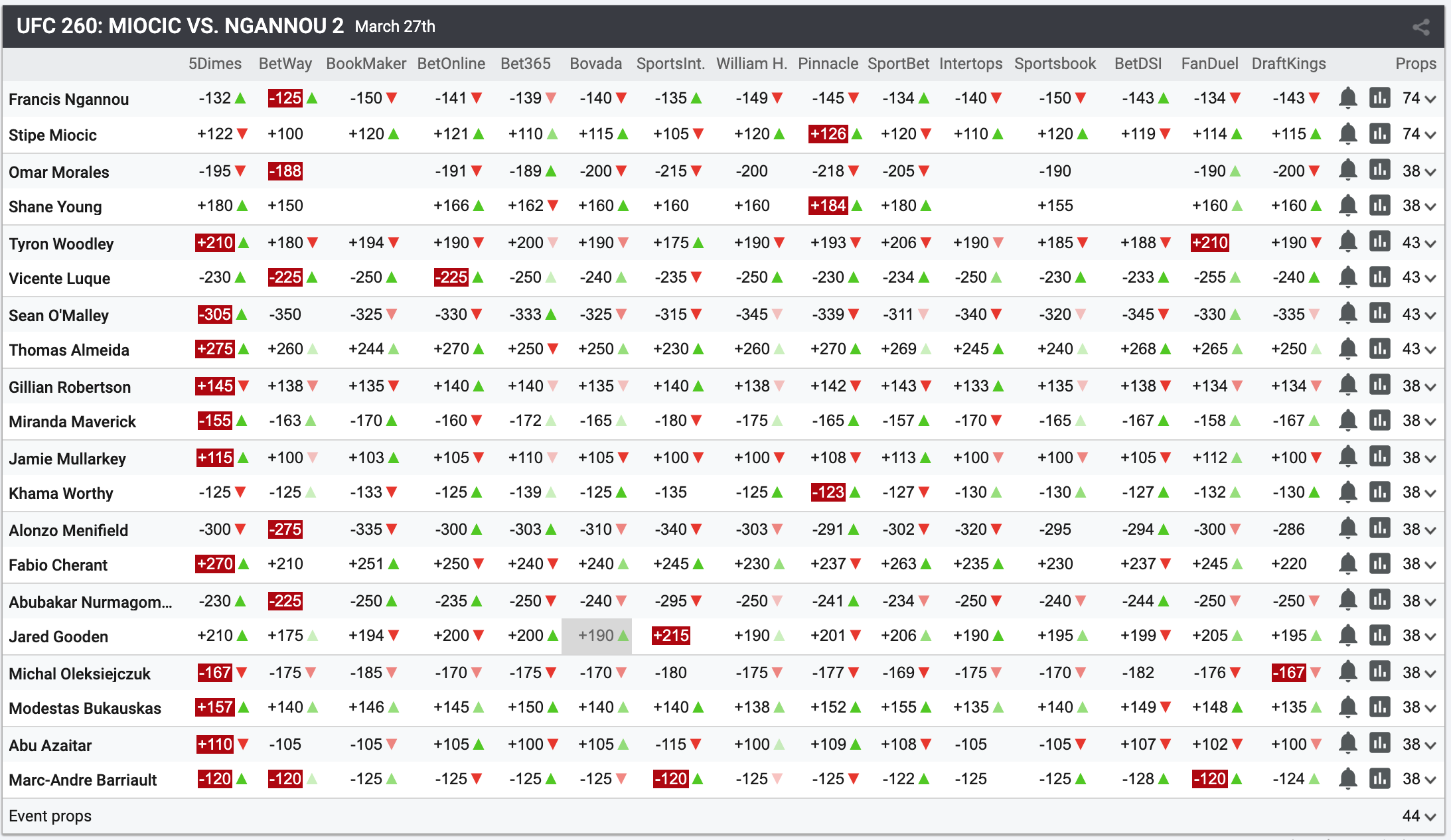 Here are the best bets today…

PICK: Abu Azaitar (+110) – Two guys who have had their fair share of trouble with USADA make their returns to the octogon to fight for their rights to keep fighting in the UFC. Give me Abu Azaitar even though he’s older and undersized. Betting on the pedigree of the Fighting Azaitar Brothers.

PICK: Omar Morales (-195) – I just like Omar Morales’ ability to hang better than I do Young’s I’m riding Morales on that and the experience alone.

PICK: Michal Oleksiejczuk (-167) – Bukauskas doesn’t have a single physical edge on Oleksiejczuk besides Height, Reach, and Cardio. Michal should be able to outskill at some point to get the finish.

PICK: Jared Gooden (+210) – Close fight, I just like the striking and the ability to keep the fight at distance for Gooden to get the upset victory.

PICK: Alonzo Menifield (-300) – Menifield is much more talented and experienced than Cherant. Menifield usually comes out guns blazin’, if Cherant can withstand the firepower maybe he hangs and gets a lucky win. I just don’t see it.

PICK: Jamie Mullarkey (+115) – This should be a perfect way to start the PPV card. Two guys who fight at  really high pace. Both of these guys have extremely deep resumes, both having fought top level UFC fighters. Mullarkey just needs this win more and I’m betting that he edges out Worthy in an absolute brawl.

PICK: Sean O’Malley (-305) – I really wanted to take Thomas Almeida in this fight, I absolutely love the value against O’Malley who is coming off an absolute beating. I just believe in Sean O’Malley. I believe that an injured leg led to him losing the Marlon “Chito” Vera fight. I think O’Malley gets back on track here and so does Vegas.

PICK: Vicente Luque (-230) – Woodley is fighting for his UFC career here. Maybe he still has something left in the tank, I’m just not so sure it’s at this level. Vincente Luque is an absolute beast and this fight wont be a walk in the park. I don’t think Woodley has enough left to get this W.

PICK: Stipe Miocic (+122) – I know Ngannou is extremely dangerous and maybe I’ll be kicking myself later for making this pick. Ngannou really only needs to land one good shot and it’s over, I just think that Stipe has the blueprint to beat Ngannou and Francis hasn’t really shown much improvement, just highlights, since the last fight. Give me Stipe to get carried out on a stretcher with the title over his shoulder.