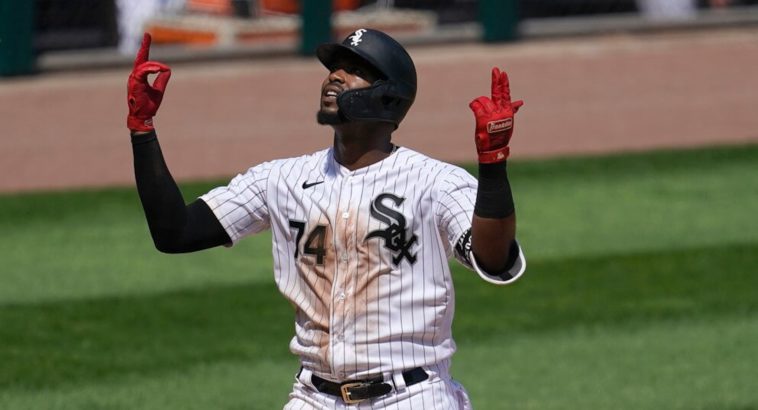 Well, every good thing has to come to an end.  Just a few weeks after I talked about how nice it was to only have the backup catcher race to talk about at White Sox Spring Training, the news of Eloy Jimenez and his ruptured pec has rocked the White Sox plans for 2021.

In the matter of a few seconds in a Spring Training game, everything changed:

Not good. Eloy exits the game after trying to rob a home run. pic.twitter.com/7rQ0BDbwy7

While the hope was that the injury would only sideline Eloy for a few weeks, the worst has come to pass, with Rick Hahn announcing the damage on Thursday.  One ruptured pec, and 5-6 months without arguably the best power hitter in the lineup.  An absolutely brutal break for this White Sox team on the verge of ascending to the top of the American League.

Beyond the immediate shock to the system, after taking about a day to let the news simmer and sit, I’ve collected my thoughts on this break.

Where does this injury leave Eloy?

At this point, the questions are endless.  Most notably, are the White Sox going to continue to trot Eloy out in left, where he’s injured himself multiple times?  While the question was always asked before, it’s now more pertinent than ever.

To be honest, I’ve never joined in on the “Eloy to Full Time DH” crowd.  Sure, these injuries are frustrating, but telling a 24 year old star caliber player that they’re relegated to never playing in the field again seems like a way to kill their motivation. Especially when said player has voiced his opposition to hitting in a designated fashion multiple times.

Additionally, this injury didn’t happen by Mortal Kombat kicking a wall going after a ball 20 rows into the seats, a la that wild game against Detroit in 2019.  There was at least a legitimate shot at this one, however misguided it may be to attempt in Spring Training.  After all, it’s hard to tell a high level athlete to not try to make a play.

Back to the DH calls.  Sure, it makes more sense than ever now, but I still think you need to keep him in left. That’s right, I’m still of the mind Eloy should be a left fielder long-term for the White Sox.

Take that with a caveat, though.  I think the days of him playing left full time are over, but that doesn’t mean it’s DH or bust.  Maybe a long term move to first base could happen, but as long as Jose Abreu is on the roster that won’t happen.  Instead, I think the most prudent decision is to deploy Eloy as a part time left fielder – think 80-100 games tops.

This breakup would accomplish two things.  First, it takes away a deal of risk from him playing in the field every day, which clearly would have a benefit to the team.  Second, it allows Eloy to continue to play the field at times, something he takes pride in.  Sure, he may not like DH’ing 60-80 games a year, but if that’s the difference between being hurt or playing a full year, I think it’s an easy decision.

I don’t really want to talk about that side any more now, though.  The thing that sucks about losing Eloy, outside of the production, is losing a player who’s so fun to watch, someone who has so much fun playing baseball.

Sure, the effortless, mammoth home runs are cool, but his game lends to more than that.

This White Sox team is built around being fun, and Eloy is arguably at the center of that.  Losing that type of player is a huge blow, and leaves a void you can’t really replace.  With the threat of a labor stoppage in the 2022 season, the thought of potentially not seeing a full season version of Eloy from 2020-2023 is something that just flat out sucks for the sport of baseball.

Looking beyond Eloy, the internal options for left field are, to put it lightly, not great. Of course, you can’t plan to replace a 40+ homer threat in the lineup.  There’s not a team in baseball that has a bat of Eloy’s caliber walking through the door to fill a spot in the case of an injury.  That’s not realistic.

BUT, having a legitimate plan B in the outfield would have been ideal.  Someone who could come in and provide about 20ish homer power at a roughly league average level of production.  Instead, here we are.

Most obviously, you have Leury Garcia or Billy Hamilton, and then Adam Engel once he’s back from a camp injury of his own. While the offensively re-invented Engel isn’t the worst option, filling the gap with Garcia or Hamilton until then isn’t a legitimate option either.  For a team with World Series aspirations that’s stuck in what certainly will be a tight division race, having your utility knife player with a career wRC+ of 75 or a designated runner/defensive sub who hasn’t cracked 2 fWAR in 5 years isn’t going to cut it.

The issue though is that the internal well appears to run dry after those two, especially with Hahn shooting down the idea of Yoelqui Cespedes taking the jump to the majors.

Talks of Yoelqui Cespedes as a LF replacement is "premature" per Hahn.

Rick Hahn though, with no prompting from reporters, floated the possibility of Andrew Vaughn taking reps in left.

Yes, the same Andrew Vaughn the team was poised to manipulate for service time.  The same Andrew Vaughn who has under 250 career professional at bats, all of which are below AA.  Not only could he possibly be expected to be hitting in the middle of the order from the get go, but now potentially taking on a position he’s never played before.

With Vaughn, it becomes clear that he needs to be on the Opening Day roster now, in some form.  You can’t take away Eloy’s bat and then hold him down for service time games.  The White Sox are on the clock this year, and it began to tick a hell of a lot louder.

However, shifting him to left in an emergency situation and hoping things work out is the sign of an organization that wasn’t ready with a viable plan B in the event one of their three historically injury prone outfielders got hurt.  You can hope for health, yes, and you can’t expect to replace a bat like Eloy’s with any plan B.

But being stuck here, in this situation, is simply ignoring a problem and hoping a very possible bad scenario wouldn’t come to pass.  That’s borderline malpractice.

Externally, there isn’t a ton to go around.  Thus is life on the major league free agency wire in late March.

While a trade is certainly possible, I don’t see the Sox dumping prospect capital to get a multi-year option in the outfield at this point.  More likely, this would be signing a Yoenis Cespedes or Josh Reddick type for one year, then resetting next year with Eloy/Yoelqui/whatever underwhelming right field option they decide to sign in the corners.

Ultimately, the White Sox are in a tough spot, barring a miracle acquisition.  That being said, the lineup is still good enough to compete for a playoff spot as is, with solid hitting virtually from 1-8.  The margin for error though, especially on the injury front, is even more razor-thin than it was two days ago.

To Eloy, come back stronger man.  This team needs you to haunt the North Siders for a lot more years to come.