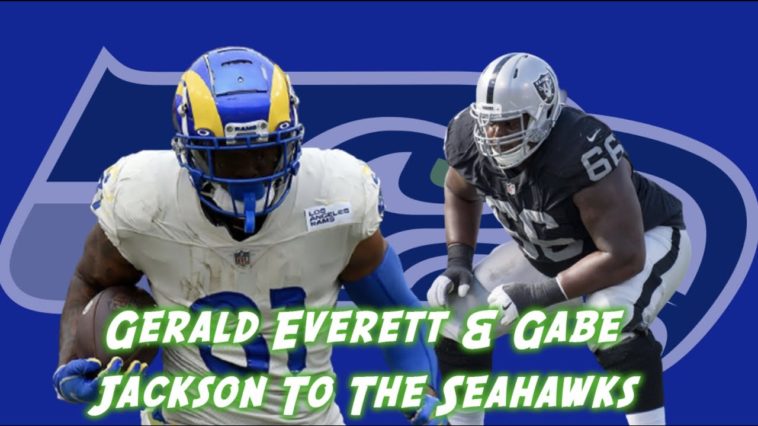 It’s been a while since Russell Wilson has been happy with the Seattle Seahawks and specifically the offensive line. They haven’t made a big move since the signing of Duane Brown four years ago to sure up Russell Wilson’s safety. Well, that changed.

Not only did the Seahawks get Gabe Jackson they also got a great tight end from the Rams in Gerald Everett.

Gabe Jackson passed his physical examination and satisfied all aspects of the deal. So Seattle announced Sunday its trade known for days: the Seahawks acquiring Jackson, one of the NFL’s best pass-blocking guards the last half-dozen years, from the Las Vegas Raiders for a fifth-round choice in next month’s draft.

It’s an offensive-line upgrade Russell Wilson has all but demanded they make.

The Seahawks also traded for Jackson. The seven-year veteran was the Raiders’ starting left guard his first two seasons, as their third-round draft choice from 2014. He’s started the last five seasons at right guard for the Raiders. He’s a huge upgrade, the biggest on the needy O-line since Brown arrived in a trade from Houston in October 2017.

The Seahawks also signed free-agent tight end Gerald Everett from the Rams, to reunited with new Seahawks offensive coordinator Shane Waldron. The team announced that deal as official on Sunday. He gets one year and $6 million guaranteed, with incentive bonuses that could make the value $7 million. Coach Pete Carroll hired Waldron in January to replace fired Brian Schottenheimer. Waldron was Everett’s position coach then passing-game coordinator for the last four years in Los Angeles.