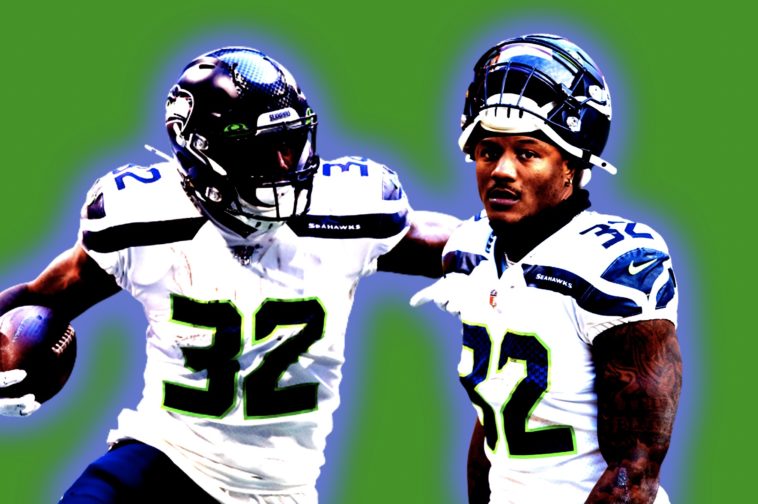 Chris Carson might be one of the 5 or 6 best running backs in the NFL and the Seattle Seahawks have locked him up to at least another 2 years under contract. Seattle and Russell Wilson couldn’t be happier to have him stay in town!

Carson also carries with him a lengthy injury history dating back to high school. While starring at Parkview High School in Lilburn, Georgia, he tore his ACL, which cost him a shot at playing for the Georgia Bulldogs. He battled ankle and thumb injuries at Oklahoma State and after missing most of his rookie season in Seattle with a broken ankle, he has missed seven games over the past three years due to a cracked hip and a foot sprain.

Considering Seattle’s roster needs, Carson’s durability red flags, and the veteran’s standing as one of the top backs set to test free agency, the odds of him coming back in 2021 seemed slim.

Combing through the contract details more closely at actual payout terms, Seattle struck a bargain retaining one of the NFL’s most productive ball carriers. In 2021, Carson will earn $1 million in guaranteed money and can make up to an additional $1.4 million in incentives, carrying a cap hit of just $2.5 million. This accounts for less than 1.5 percent of the team’s current cap.

In 2022, Carson’s cap hit jumps up to $6.425 million due to a base salary of $4.5 million along with a prorated bonus of $1.5 million. Still, that only accounts for 3.2 percent of the team’s cap and if he has a strong 2021 season, that’s an affordable rate for a top-10 running back of his caliber. If he struggles with injuries again or isn’t as effective as prior seasons, the team can cut him and absorb a $3 million dead cap hit.

By adding a third “void” year – something Schneider and Thomas hadn’t done previously on a contract – the Seahawks were able to push some of Carson’s cap hit to 2023, creating financial flexibility for the present. They will have to pay a small dead cap charge that year, but with the NFL’s new television deal kicking in and the cap expected to skyrocket as a result, that shouldn’t be a concern for the organization.