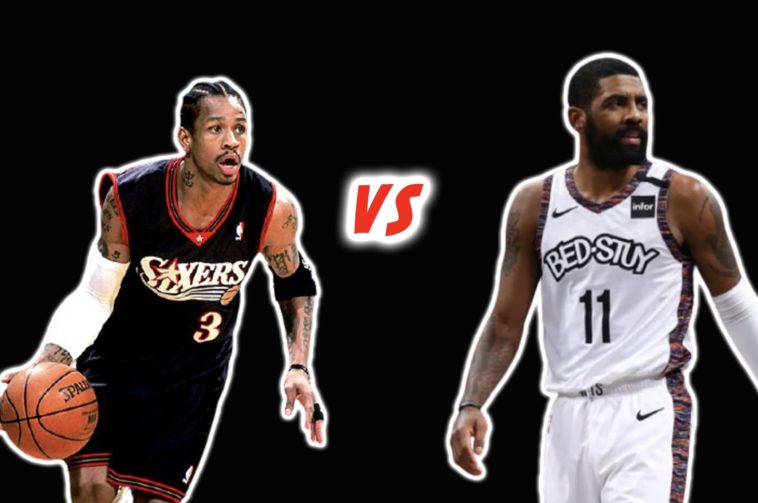 Kyrie Irving vs. Allen Iverson is a topic that has been brought up a lot in the media, and it is trending again on social media. NBA Twitter was having a field day discussing who is the better overall player. This is a tough one given the fact that Kyrie Irving did win an NBA Championship, but that was with LeBron James. Allen Iverson on the other hand, won an MVP and CARRIED and much less talented team to a Finals, while losing to the 3-peat Lakers.

Kyrie better than Iverson at this point? ??? pic.twitter.com/Mo1chEMH7p

Now, Stephen A. Smith has joined the conversation and he did acknowledge that Kyrie is great and a very talented player but he reminded everybody what AI did during his career and what he meant for the Sixers during his best days. When one journalist asked if Ky was already better than AI, Smith delivered a compelling reply.

Better…..sure, skill-wise. Better handle. Better J. Hell, even a better scorer. But who’s more dependable? Who carried a franchise on his shoulders night-in + night-out? Who said, ‘Give it all to me’ then basically carried his team to the Finals by his damn self? https://t.co/Cnr5kxUcWv

Outside of NBA Championships, everything else leads to the fact that Allen Iverson is the better player. Leading a team to the Finals in 2001 when he was the MVP of the league, he has a higher career scoring clip, higher assists, more steals, and overall did not have the team drama that Kyrie Irving has seemed to have.

The tough part here, is now that Kyrie is on the Brooklyn Nets, with James Harden, Kevin Durant, and now Blake Griffin, another rings might give the Kyrie side more and more reason to believe he is ahead of no-rings Allen Iverson….