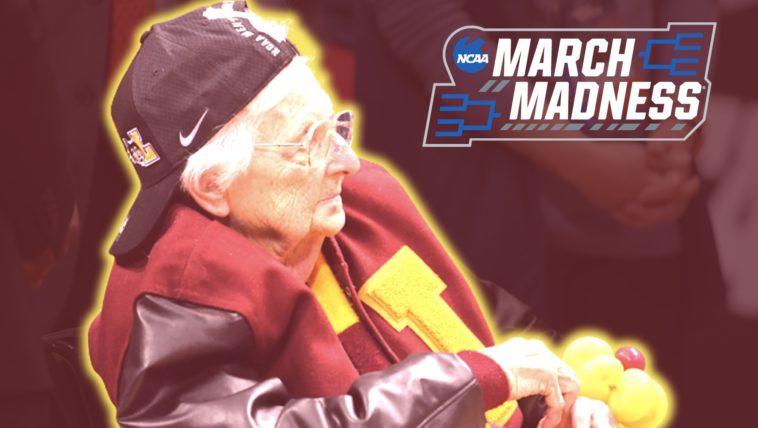 Sister Jean is back! Loyola Chicago University is back to the tournament for the first time since their magical Final Four run in 2018. We all know and remember sister jean, at the time, she was an internet sensation. Well, this time around, she is vaccinated and she will be back to the NCAA Tournament as one of the 25% capacity fans!

The Ramblers are coming in as an underdog story once again, this time around though, they actually are an 8 seed and a betting favorite over 9 seed and ACC Champions, Georgia Tech. Yet, their odds to win it all are quite unfavorable!

To people outside Loyola, Sister Jean became a household name in the span of just a few weeks in March 2018. When the Ramblers played their first-round game in the NCAA men’s basketball tournament, announcers and reporters were eager to tell the story of the then 98-year-old chaplain sitting courtside to cheer on her team. In fact, if you Google the phrase “basketball nun,” you’ll find links to dozens of stories from CNN and the New York Times to People magazine and ESPN singing the praises of the Catholic sister who accompanied Loyola on their improbable road to the Final Four. But to members of the Loyola community, the rest of the country was just discovering what they’d known for a long time.

It began in 1994, when a 75-year-old Sister Jean was ready to retire from Loyola. But once again, she was called—this time to take on a role helping student athletes keep up their grades so they could maintain their eligibility to play. That evolved into a position as official team chaplain for the men’s basketball team, with her pre-game prayers and advice to players becoming a critical part of the team’s success. Her role with the team has also earned her numerous accolades, including a much-deserved induction in the Loyola Athletics Hall of Fame.

But make no mistake, Sister Jean is more than just a fan—she knows her basketball as well as anyone on the court. Upon arriving at Loyola, Coach Porter Moser got a scouting report from Sister Jean on every one of his players. “She still sends me an email after every single game,” Moser told the Peoria Journal Star in 2017. “There is no human like her.”