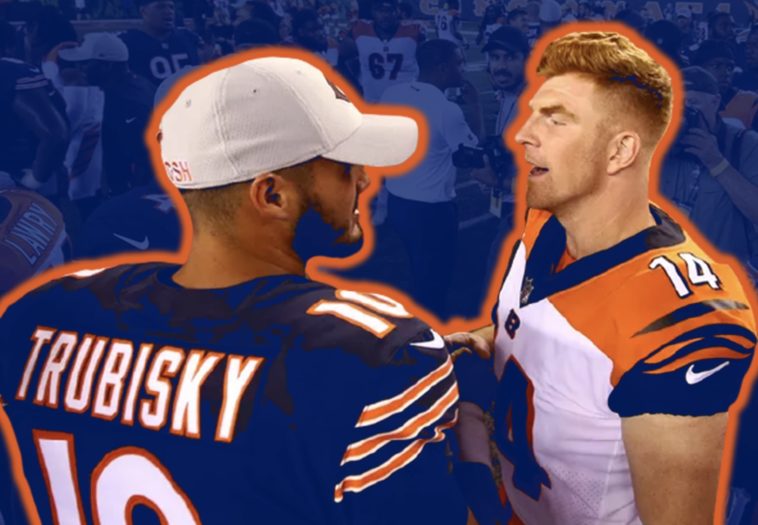 You know that lingering sense of dread that you’ve been ignoring for the past few months? This week’s moves by Ryan Pace are what you were afraid of. There is something so exhausting about being a Bears fan. We don’t have the luxury of a team that perpetually underperforms but still has low expectations. The Bears are one of the largest franchises in the NFL. Football in Chicago is not something that is taken very lightly. The team and the front office are held to a higher standard than most sports teams in this country. Us Bears fans don’t demand perfection, just to be competitive. As of the news yesterday, that no longer is the case at Halas Hall.

Unless you’ve been firmly hunkered down in a nuclear fallout shelter to avoid hearing any news, the Bears are signing Andy Dalton to a 1 year, $10 million deal and all signs point to him being in the starting role come week 1. This is absolutely gut-wrenching, nauseating news as a Bears fan. Since 2018, Andy Dalton is posting worse numbers than Mitch Trubisky in just about every category. Dalton is boasting a lower completion percentage, more INTs, fewer TDs, and about a third as many rushing yards as Mitch. What we’re very likely looking at is a downgrade from Mitch, which made me vomit just by typing it out. As any Chicago Bears fan could tell you, the glaring weakness that the Bears have in the post-Cutler era is at the quarterback position. If the stats are revealing anything at this time, they’re showing that we just took a big step back. In all fairness, Andy Dalton was not Ryan Pace’s first choice. It has since come out that he offered an enormous package to Seattle for Russell Wilson, including three 1st round picks, a 3rd round, and two starters. Pete Carroll, perhaps wisely, declined the offer. Knowing that Pace did take a big swing for Russ is comforting, but what cancels that out is the fact that he missed on Russ and just gave up and signed Dalton. If Andy Dalton is part of some larger trade deal that lands us Deshaun or a similar caliber QB, I’ll be the first to apologize but that does not appear to be the case.

To add injury to insult, there are a lot of other major issues facing the team on both sides of the ball. Firstly, Allen Robinson is still very unhappy and underpaid. I have yet to hear any news of an extension headed his way so thus far, he’s a ticking time bomb. This situation was totally avoidable too; such a shame. On top of that mess, Kyle Fuller was cut because he’s adding a $20 million hit to the salary cap. An absolute cornerstone of the defense, a key member of this team, cut by Pace when we’re within cap. Such a disgrace. To round things off on this Blood Thursday, the Bears are also allowing Akiem Hicks to seek a trade. I still really do not understand why Pace is making any of these decisions. I fail to see the logic in any of it. Tweet at us if you have any bright ideas.

All in all, it has been a pretty tough week to be a Bears fan. If I hear of one more calamity coming out of the front office, I’m flipping to the Bills Mafia faster than you can say “table match”. I hope Mitch does well in Buffalo, I really do. I’ve never been much of a Mitch Man but odds are high that he’ll get a ring there.