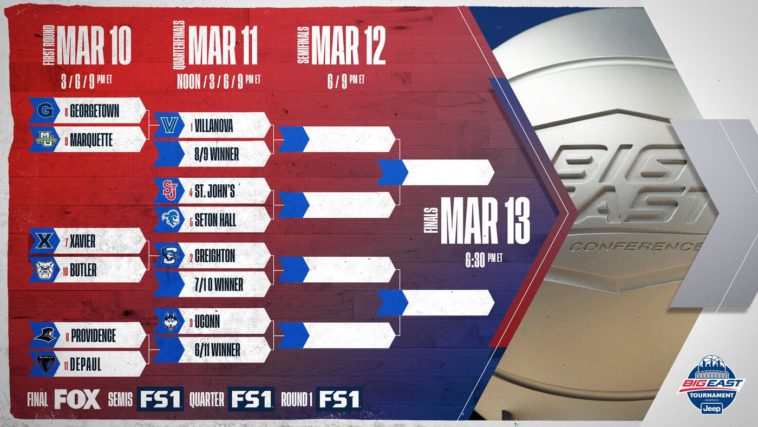 It was a tumultuous last week of the Big East season both on and off the court. Villanova secured yet another regular season title, but celebrated somberly as it lost senior leader Collin Gillespie and his replacement, Justin Moore, to injury. Gillespie’s torn MCL ended his season, and likely storybook career. Moore may return for the NCAAs, but will be hobbled if he plays. Creighton continues to deal with the fallout of Greg McDermott’s inexcusable comment and is the favorite on paper to cut down the nets at MSG, though it wouldn’t be surprising if they falter given the circumstances.

UConn is peaking at the right time and fits the narrative of their prior deep March runs. Seton Hall is an absolute mess. Xavier’s bubble is itching to burst after consecutive losses. St. John’s isn’t dead yet. Marquette actually managed to string consecutive wins together. Georgetown managed to split the week yet again. Providence now has wins over 4 of the league’s top 5 teams after outlasting Villanova in a rock fight.

The conference has beat itself up the whole year, and it’ll all come to a head in what’s sure to be one of the most unpredictably entertaining conference tournaments this week. It’ll be a heck of a four days.

These rankings are a snapshot in time and won’t jive with the tournament seedings.

Why they can win: History may be poised to repeat itself. Kemba Walker, Shabazz Napier, and James Bouknight? The Huskies have won four in a row and are quite the media darlings heading into the Big East tournament. UConn kept its head above water behind strong defense with James Bouknight out, and since he’s returned they’re on a roll. The only two games they’ve lost with him in the lineup are an OT loss to Creighton in Storrs (that would’ve had a much different result in any other year with fans in the stands behind a 40-burger from Bouknight) and to a full-strength Villanova team.

Given Villanova being mauled by the injury bug and Creighton’s recent troubles, the Huskies could very well cut down the nets in MSG.

Why they can win: Winning the new Big East is flat out what Villanova does. Losing talents like Collin Gillespie and Justin Moore could very well spell the end of any other team in the league, but given a few days to prepare we wouldn’t put it past Jay Wright to pull off something special. Jeremiah Robinson-Earl and Jermaine Samuels are ready to put the team on their backs and bring their still-worthy supporting cast along for a storybook run in honor of their historically great point guard.

Why they can win: Not a ton of notable college basketball voices believe in the Jays, and Marcus Zegarowski is well aware of that fact. He’s the best point guard in the tournament now that Gillespie is unable to participate. The only chance for the Jays to keep the streak alive of ‘finishing’ the season in a higher spot than predicted in the Big East preseason coaches poll every year since joining the Big East is to win the whole daggum thing. Down the stretch Mitch Ballock has been playing as aggressively on the offensive end as Creighton fans have dreamed of for years, and he’s B-Frank’s #KembaCandidate as a result.

That, and Creighton shouldn’t have to face Providence.

Why they can win: At one point the Red Storm were among the hottest teams in the country. They’re capable of stringing wins together and can match any pace thrown their way. With a healthy Posh Alexander on the floor (he announced that he’ll play tomorrow) they can compete with anyone in the league. As if this team needed any more motivation, they’ll need a deep Big East tourney run to secure a spot in the Big Dance.

Why they can win: Zach Freemantle & Paul Scruggs make up one of the most potent scoring duos in the conference. If Xavier can sink shots from beyond the arc they’re an incredibly tough out and much better than their 7-seed might have you believe. X hasn’t been consistent since coming off of their pause, but the Musketeers won’t let Paul Scruggs’ last shot at conference tournament glory end easily.

Why they can win: They’ve beaten Villanova, Creighton, UConn and Seton Hall this year. A David Duke-James Bouknight showing should be one for the ages. Not many big men in the league can contain Nate Watson, and the Friars are difficult to prepare for on short rest. Given they get by DePaul and keep the UConn game in the 60s, the path exists for Ed Cooley to lead Providence to their 6th NCAA tournament berth in the last 7 season.

Why they can win: DJ Carton is a dark-horse #KembaCandidate, and Dawson Garcia is an incredible sidekick. This group has underachieved ever since knocking off Wisconsin and Creighton early in the year and are capable of playing at a high level. As evidenced by their recent dismantling of UNC, no stage is too large for the Golden Eagles. Wiping the slate clean is just what this team needs.

Why they can win: Credit to Patrick Ewing, the Hoyas have been incredibly tough to play after coming off of pause. Baby-faced floor general Dante Harris plays wise beyond his years, Chudier Bile has been as important of a grad-transfer the league has seen this year, and Jamorko Pickett & Jahvon Blair’s last shot to show out at the Garden could be special for a group used to playing much better than their record.

Why they can win: This team has the talent to compete with just about anyone in the conference, especially now that Villanova is down Gillespie and Moore. Their problem is mental toughness, they have none of it. The offense has been incredibly ugly at times and they need to rectify this by playing defense. Defensive intensity and getting out and running will give Seton Hall a better chance to make a run in this tournament. A little confidence can be a dangerous thing.

Why they can win: The Bulldogs have played spoiler to much better teams time and time again this season. Depth will be an issue, but if the Bulldogs can avoid foul trouble they could frustrate opponents more than once. Their young guards are incredibly shifty, unafraid to take big shots, and the big brothers Bryce are forces to be reckoned with on the interior. LaVall Jordan’s starting five has proven they can match up well with the league’s best, and Butler has grown used to playing competitive ball even when undermanned.

Why they can win: Weirder things – both in the sporting world and outside of it – have happened in the past year. 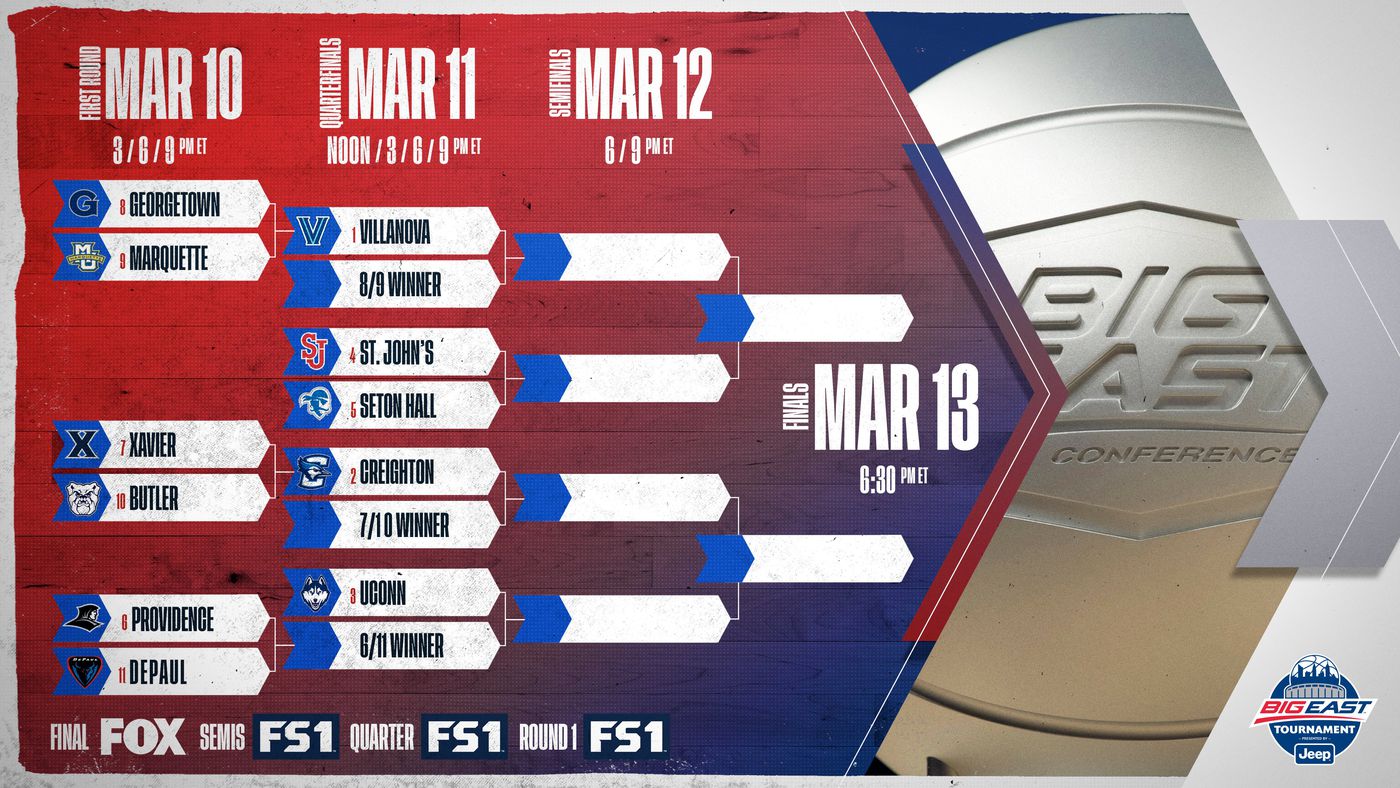 First Round
Marquette over Georgetown
Xavier over Butler
Providence over DePaul

First Round
Georgetown over Marquette
Xavier over Butler
Providence over DePaul