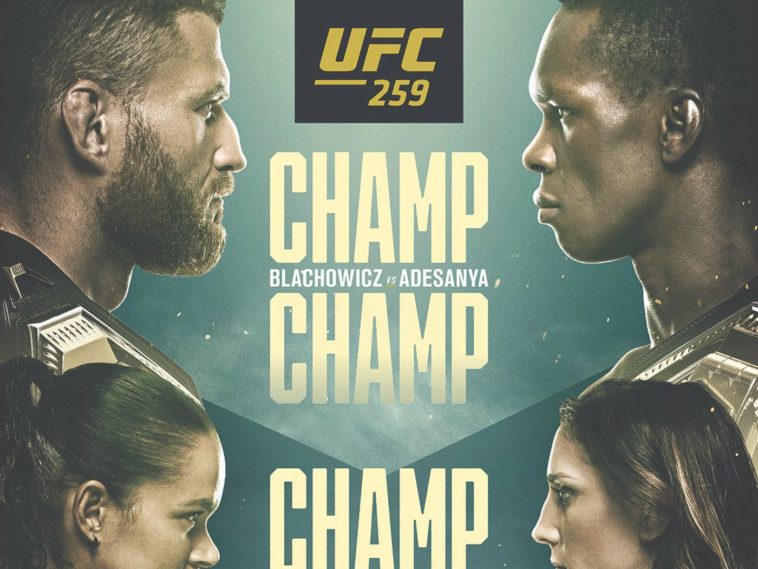 Well, it has seems that water has finally found its level for your boy. Seemingly one of the first positive shows of 2021 for this here handicapper, here’s to hoping that we keep rolling with the W’s from here on out. Hopefully a lot less of this and a little more of this.

Last week for the Gane v. Rosenstruick card, I sent my picks out exclusively on Twitter over at @SONTChicago and went 5-3-1 with 2 losses on heavy underdogs. Once again, I’m going to pick all of the fights and try to keep the train rolling.

Here are the extended fight odds: 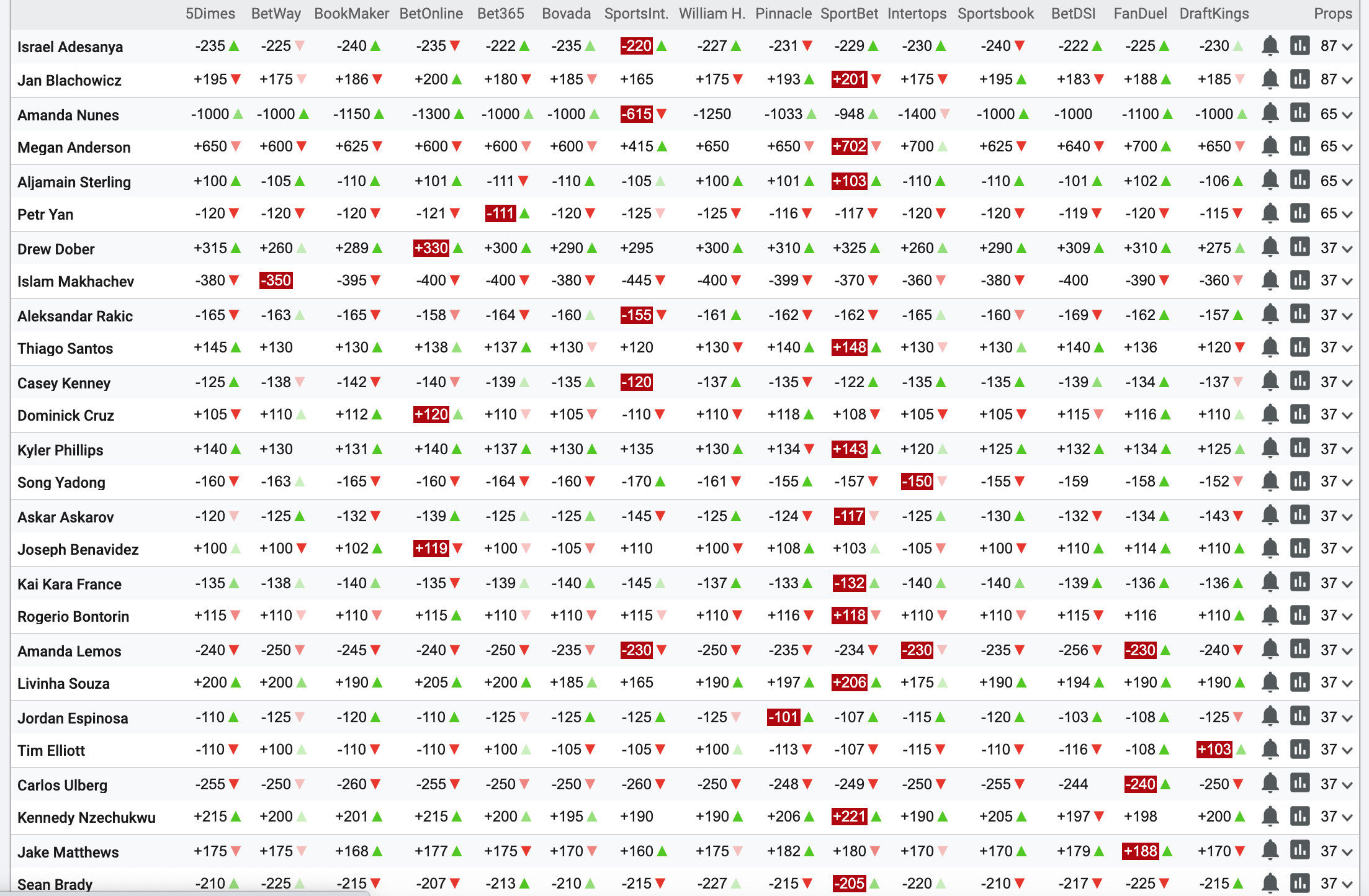 PICK: Mario Bautista (-235) – Bautista is a talented prospect, thus why he is so heavily favored down card. At 8-1, his only pro loss is to future title challenger Cory Sandhagen, I just like the match-up here for Bautista to get another W.

PICK: Uros Medic (-170) – Another top prospect fighting on the early prelim PPV card. No coincidence there, Dana loves to showcase his future stars on big cards, as he should. I think Uros Medic is the truth. This guy is a serious prospect, a former Contender Series fighter, he should get an easy win Saturday night.

PICK: Livia Renata Souza (+200) – In a matchup of fellow Brazilians, I’m riding with the gritty underdog. I like Livinha as an extremely live underdog at +200.

PICK: Sean Brady (-210) – Another top prospect, I suspect another big W for Sean Brady. A very exciting fighter at 170 lbs.

PICK: Carlos Ulberg (-255) – Israel Adesanya’s teammate at City Kickboxing makes his UFC debut against another prospect in the “African Savage” Kennedy Nzechkwu. The Middleweight champ gave his teammate a ton of praise at UFC pressers this week as he touted him as a future light heavyweight champion. I like the team aspect of Ulberg making his UFC debut while fighting on the same card as a few other teammates in Adesanya and Kara-France.

PICK: Tim Elliott (-110) – Tim Elliott is a funky dude. He’s also tough as shit and really tough to bet on. Elliott only really loses to top-tier Flyweights. I don’t think Espinosa is there yet. I suspect this to be a really ugly fight. Elliott wins close by decision.

PICK: Kai Kara France (-135) – This will be a really close fight. Two ascending Flyweights. I’m just going to ride with the City Kickboxing guys to make a night out of Izzy going for double gold.

PICK: Askar Askarov (-120) – Benavidez is washed. I think Askarov uses this win as a stepping stone to get a future title shot.

PICK: Song Yadong (-160) – This will be a firecracker of a fight. Two guys that haven’t lost in years. Phillips riding a 3-year win streak while Yadong hasn’t lost in half a decade, oh yeah and Song Yadong is only 23. This kid has dynamite for hands, I think he finishes Kyler Phillips for the first time.

PICK: Casey Kenney (-125) – This is just a gut pick that Dominick Cruz doesn’t really have “it” anymore. I know these guys want to fight forever and he’s still only 33, but the signs just point to him losing this fight to the surging Casey Kenney. This guy is no slouch.

PICK: Aleksander Rakic (-165) – This pick is solely based on where these guys are in their careers. I think Rakic is on the way up while Santos is on the way down. If this was the “Maretta” of say 5 years ago, I’d ride with Santos all day against the up-and-coming Rakic. Rakic just seems ready to make that next step. Should be an interesting fight.

PICK: Islam Makhachev (-380) – I’m a huge fan of Drew Dober and have made some decent money betting on his fights. Islam is too much. This fight is the start of his ascension to the top of the 155-pound weight division. I’m not betting against the protege of Khabib.

PICK: Aljamain Sterling (+100) – I went back and forth on this fight. In the end, I don’t think Sterling loses his title fight after it has evaded him for so long. Personally, I really want to see Aljo get the gold. Yan is tough but Sterling can beat you in many ways. A great fight to start the run of gold.

PICK: Megan Anderson (+650) – I know this is crazy. But Megan Anderson has the whole future of the Featherweight division on her shoulders. She can keep it alive with a win while also making history. I really just think that +650 on Megan Anderson is too tough to pass on. She’s an extremely talented 6’0″ fighter that can definitely take down the GOAT, they all fall eventually.

PICK: Israel Adesanya (-235) – One of the greatest counter fighters of our generation. Izzy came into the weigh-in at 200.5 lbs. 5.5 lbs under the Light-Heavyweight limit. Clearly could be labeled as a bold move, but to me, it is as calculated as ever. Stylebender always has a rhyme to reason and the way he fights isn’t conducive to him gaining weight. He is coming into this fight as comfortable as ever and I’m sure he will put on a great show Saturday night. Admittingly I have not said much about Jan Blachowicz, there hasn’t been a lot to come out of his camp. He is the quiet type, not going to read into that too much but I don’t think Blachowicz should be overlooked. He is the Light Heavyweight champ for a reason and he clawed his way to get it. Very excited for this main event and excited to see “The Last Stylebender” get his Double Gold.

It should be a phenomenal night of fights. Truly the best card of the year so far. Aljamain hopefully gets crowned the new Bantamweight King. Megan Anderson potentially becomes the new Featherweight Queen and Queenslayer. Israel Adesanya looks to etch his name in history as just the 5th UFC Double Champ. So much to be had on Saturday night. Make sure to follow along on Twitter @SONTChicago for all things Combat and Chicago Sports.