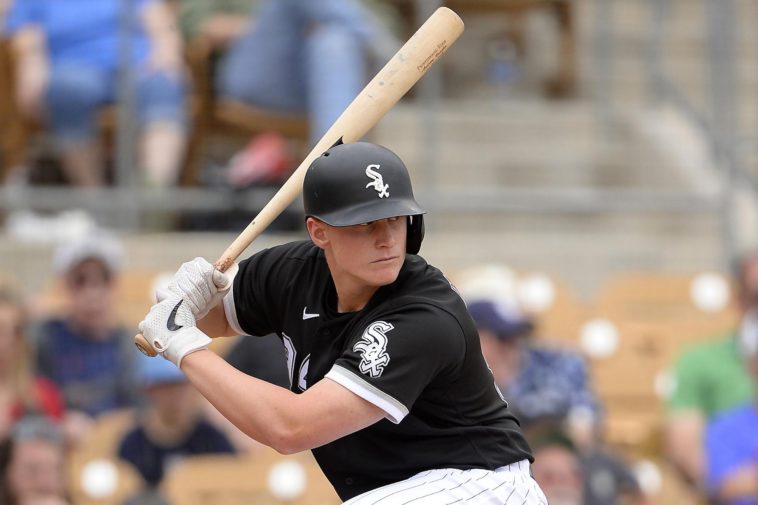 Spring Training is the time of year to exaggerate every little improvement to the end of the earth, but this year, with Andrew Vaughn, it’s all real. After an offseason that saw the White Sox funnel most of their available resources towards the starting and relief pitching corps (plus one former leader of the team-declarer), the DH battle in White Sox camp was set to take place between several of the younger players on hand.

While Andrew Vaughn had to be the clubhouse favorite from a purely baseball standpoint, some other options exist.  Namely, Zack Collins and apparent Tony La Russa appointed competition Jake Burger and Gavin Sheets.

The main competition to Vaughn, of course, wasn’t Collins, or Sheets, or Burger, or even the ghost of Yoenis Cespedes.  The main competition here is, was, and will be service time manipulation.  And until the ink is dry on an extension, Andrew Vaughn’s main enemy will remain in place.

Back to Spring Training for one second.  It’s hard to read too much into any of these games, but Vaughn’s line is resounding:

Ladies and Gentleman, the Designated Hitter for YOUR 2021 Chicago White Sox #ChangeTheGame
pic.twitter.com/COWTovdyDg

Service time be damned, Andrew Vaughn has made it clear he is the top man for the job now.  It’s not just about the homer, either, as sexy as that round tripper is.  It’s how he’s seen pitching so far in Spring Training, and how he’s handled at bats.

The three walks in that line are perhaps what jump out at me the most.  Sure, the hits and the homers off of washed up has-been/never-will-be pitchers are cool, but having three walks in two games shows just how advanced Vaughn’s plate approach is at this point in his career.

Seeing the ball like that is something special.  The hit tool is certainly there, and if he handles at bats in a similar fashion going forward, the hits will most definitely come.

And at this point in his career, for what he’d need to be for the 2021 White Sox, that’s what matters.  In this lineup, Andrew Vaughn wouldn’t be expected to be the bat that comes to save the day.  He wouldn’t have to be a savior, like Jose Abreu, Yoan Moncada, and Eloy Jimenez were when they arrived.

In all reality, he’d have to be just a guy this year.  A hitter like this, being just a guy in the lineup.  What a luxury to have!

Sure, 40 homers would be great.  Hitting .300 over 150+ games would be amazing as a rookie.  But realistically, Vaughn is the 7 or 8 hitter in this incredibly talented lineup.  He’d have time to grow into his major league profile here, without the added pressure of carrying a team.  Seems like a win-win.

Plus, having a plus hitter not named Yasmani Grandal available to spell Jose Abreu at first is a neat thing to imagine.

First base drill with Abreu, Vaughn and Sheets. pic.twitter.com/T5fMSiwtEo

The other thing that’s a factor in how Andrew Vaughn would fit into this team’s plans is recent (?) history.

Literally anything would be better than the below replacement level play the White Sox have had in the revolving door of the DH position since Jim Thome hopped on a jet to LAX.  Depressing for the past decade of DH play, yes, but that at least gives a low bar for Andrew Vaughn to meet and inevitably exceed in 2021.

Ok, I’m slowing down for a minute.  Back to service time, the elephant in the room.

The fact of the matter is, there’s no defensible reason to keep Andrew Vaughn down to open the year.  No matter which of the main culprits you can think of, none of them hold up.

An Eloy-like reference to more defense or seasoning in the minors? Well, he’d be hitting in a designated fashion, so defense isn’t a factor.  Plus, AAA isn’t even going to be starting until May.

Alternate sites are coming back — and the AAA season, which was scheduled to begin April 6, will be delayed for at least a month, sources tell ESPN.

News at ESPN on the reason for delay, the wait for vaccines and how this alt site will differ from 2020's: https://t.co/zRRT6mn7Nz

Can’t get the Kris Bryant four week in the minors treatment if the minor league season is delayed 5+ weeks.  Galaxy brain level stuff there.

Ok, so there’s still that pesky service time.  Sure, if Vaughn starts in the minors the Sox get an extra year.  Should this team be able to withstand 4 weeks of DH play from elsewhere?  Sure, if you’re going into the year with pennant aspirations you should.

But looking deeper, the only position players under White Sox team control through 2027 or later are Eloy Jimenez, Zack Collins, Nick Madrigal and Luis Robert.  On the bullpen side, you get Garrett Crochet, Aaron Bummer, and Matt Foster, but that fact remains: by the time Andrew Vaughn’s team control has passed, most of the core contracts for the White Sox will have expired.

If the worry is that the Sox don’t have the financial resources to pay for Vaughn’s free agency, then I hate to break it to you but Tim Anderson, Moncada, and Lucas Giolito are gone by the time Vaughn hits the market.  So too are Grandal, Dallas Keuchel, Lynn, Hendriks, and presumably any other free agents signed between now and then.

Translation: if the White Sox can’t afford Vaughn in 2027, they’re already out of their window with key departures.  The difference in a year won’t matter if the window is already closed.

So, it’s time for this franchise to, for once, not hold a top prospect down until they sign an extension.  Bring Andrew Vaughn up, and let him rake in Chicago in 2021.  If you’re all in for a World Series, it’s time to damn well prove it.  No half measures in 2021.