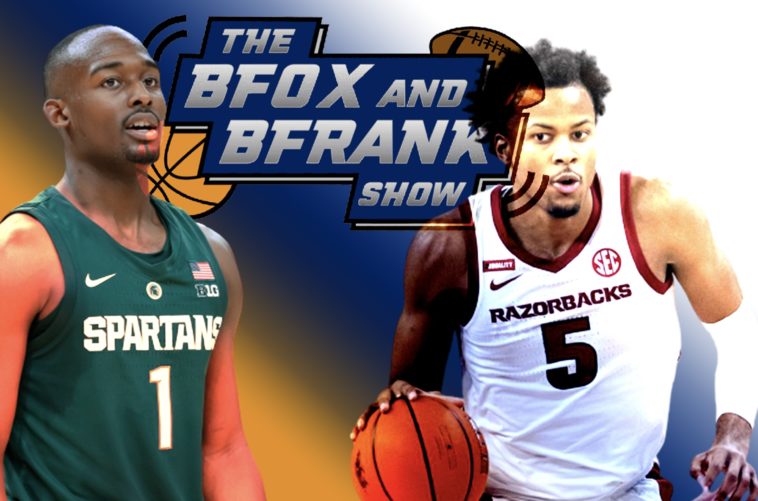 On this week’s episode of The B-Fox and B-Frank Show, it is officially March! We are two weeks away from Selection Sunday and the guys are excited to be so close to the greatest sporting event of the year. As is the case during College Basketball season, the guys take a look at the winners and losers from the past week, starting with the positives. Michigan State had a huge week picking up wins over Illinois and Ohio State propelling themselves back into the mix for an at-large bid. “Any team with the word ‘Kansas’ in their name” as B-Fox so eloquently stated. Arkansas, Kansas, and Kansas State all had big weeks with the Hogs taking sole possession of 2nd place in the SEC and rising the rankings, Kansas knocking off Baylor, and K-State beating Oklahoma. Additionally, Oklahoma State got a nod from the guys after defeating Texas Tech and Oklahoma this past week.

Moving to the losing side, there were many this week. B-Frank opens with both himself and B-Fox. Seton Hall and Indiana both had a rough week with The Hall losing at Butler mid-week and Indiana falling to Michigan (no shame there) and rutger, making Archie not only the first IU coach to lose to rutger at home but also to be swept by them in a season. Both squads are firmly on the bubble and with things basically breaking their way can play their way in still despite the bad stretch of games. The Virginia schools made the losers list after Virginia Tech lost to a surging Georgia Tech and Virginia lost three straight including the most recent one to NC State. Andy Enfield’s Men of Troy were losers last week after being swept on the mountain trip by Utah and Colorado. The Trojans had a firm hold on the top spot in the Pac-12 heading into the week and now are looking up from 3rd place. The aforementioned Oklahoma Sooners struggled losing to a bad Kansas State team and their rival Oklahoma State behind Cade Cunningham’s 40 point outburst. Ohio State is another team that got hot and has cooled off lately dropping a few games. Lastly, the Drake Bulldogs made the list following their loss to Bradley.

The guys also had Dan Dakich on the loser list but this morphed into a bigger conversation about Dan, his antics, his “style” for lack of a better word, and what they think will come of his comments and actions. B-Fox having first-hand knowledge and experience in this area of not just the country but specifically Indiana gives his two cents.

Finally, the guys close with the Season 6 Heat Check Sim NCAA Tournament. For the first time in simulated history, both B-Frank’s Pirates and B-Fox’s Bulldogs are in! The Hall snagged a 4 seed and Georgia grabbed a 6 seed, both were screwed by the Selection Committee with difficult games, but from a bird’s eye view, this has been a highly successful season for both.