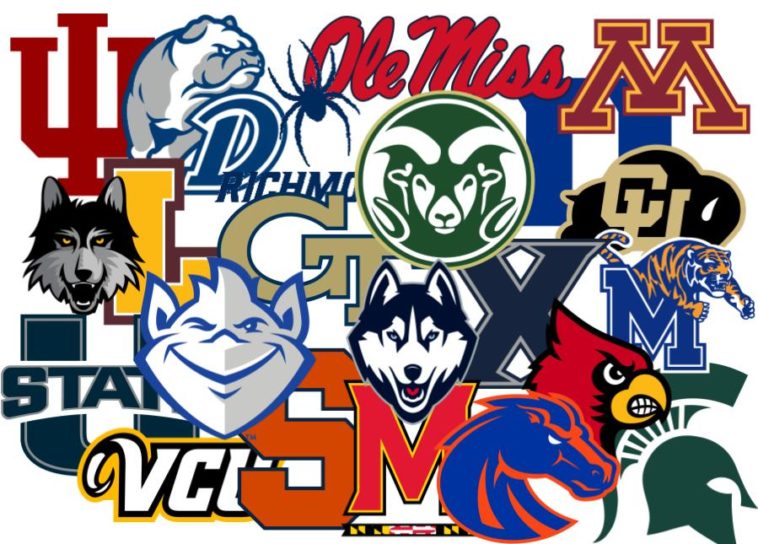 We’re in the thick of it here in College Basketball, the season is quickly winding down and Selection Sunday is just around the corner. The bubble is top of mind for many teams and fans and there are many big names making some runs for an at-large bid.

The Missouri Valley really looks like they could grab two bids this season. Drake was one of the nation’s last unbeaten teams and owns a split with currently ranked Loyola. Bradley was the MVC’s Tournament winner last year and still has some talent. A loss on Friday would end Drake’s hope for an at-large bid.

The Spiders were a hot, trendy name preseason and early on when they beat Kentucky at Rupp. Fast forward a few months and Richmond find itself squarely on the bubble. Saint Louis was one of the hottest teams as well before a lengthy Covid pause knocked their season off the rails. This feels like a “loser goes home” game with both teams still on the outside looking in per Bracketmatrix.

The second of the two Valley teams is Loyola. The Ramblers currently boast a Top-25 ranking with a season split against Drake. A loss here, however, would end any hope at an at-large bid. The Ramblers have looked really strong, especially defensively, and are 19.5-point favorites tonight. While I don’t expect this to be a close game, it has to be listed because this isn’t anarchy, it’s just College Basketball.

Another up-and-down team this season is the Utah State Aggies. The Aggies owned an 11-game win streak earlier this year and have a season sweep of San Diego State. The problem is losses to UNLV and South Dakota State. Their NET looks decent at 55 but they need some help from fellow bubble teams. A sweep this weekend of a solid Nevada team would put Utah State in a decent spot for an at-large.

Michigan at Indiana 11 am CT

For now, the Hoosiers are on the right side of the bubble, marginally so. Michigan is a win-and-in-game in its simplest form. The Wolverines are red-hot since returning from their Covid pause with wins over Wisconsin, Iowa, and Ohio State. If Indiana can find a win, they will be dancing.

Personally, I don’t think either of these teams are Tournament caliber clubs, but as is tradition, the name value is keeping Syracuse alive. Georgia Tech on the other hand has a 40 NET ranking and own wins over Clemson and Virginia Tech. Again, I don’t think either of these teams makes it in the end, but the loser is definitely out, regardless of what Josh Pastner says.

The Rams are firmly on the bubble and with some teams in their neighborhood losing, they are on the right side. A loss to a struggling Davidson team doesn’t end the season, it’s only a Q2 loss, but it would hurt. A loss means VCU needs a run in the A10 tourney, a win keeps them safely on the right side of the bubble.

James Bouknight is back and UConn looks like a competent team again. Marquette is fresh off a dominant win over bubble team North Carolina, the best game they have played all season. This is a dangerous game for the Huskies because it can only hurt.

Fresh off a killer loss to Marquette, the Tar Heels really need this one. The Seminoles are the clear-cut top team in the ACC and look well on their way to a Top 3 seed in the NCAA Tournament. A win should level out UNC and punch their ticket, a loss gives teams below them a chance to move up.

Boise State has a chance to firmly stamp their ticket to the NCAA Tournament. A pair of games at San Diego State to close the year is as good as it gets in the Mountain West. Right now, the Broncos are in. Things can change, especially with a disappointing end to the year. Find a win on Saturday and they can sit back and relax.

This game can only hurt Colorado State and it really doesn’t move the needle. A loss is back-breaking, but even with a win over Air Force, the Rams are still in danger as they are directly on the fence.

Another team hurt by the Covid pause was Xavier. The Musketeers started the season very hot, got hit by the pause, and are now scaping and clawing to keep their Tournament hopes alive. A win over Creighton, who has turned the corner of late, would put Xavier firmly in the field.

Somehow, someway, Duke has found themselves back in the Tournament conversation despite losses to Miami and Notre Dame, and only one good win over Virginia. Although Virginia has fallen off lately and makes you wonder if they are actually a good team. Louisville, on the other hand, is in. A loss moves them ever closer to the wrong side of the bubble, a win for Duke gets them seriously in the discussion.

I don’t know if you’ve heard, but Minnesota doesn’t have a road win yet this season. Beating Nebraska on the road is not an accomplishment, but it matters for Minnesota. A loss ends their season.

Both teams are safely in right now, but I think a loss for Colorado inches them closer to the 9/10 line, and with only Arizona State left on their schedule before the Pac-12 Tourney, that could spell trouble.

Memphis is barely on the bubble, they are very much on the outside looking in. A win doesn’t help much but a loss bursts their bubble.

Huge bubble game. Both teams have been very solid the last few weeks with the Terps planting themselves in the field around the 10 line right now. Michigan State is the Undertaker meme coming back from the coffin. The Spartans have won three straight and have wins over Illinois and Ohio State in their last two. A loss doesn’t hurt and a win would move them closer to the right side of the bubble.

Same as Saturday, Aggies need a sweep and some help.