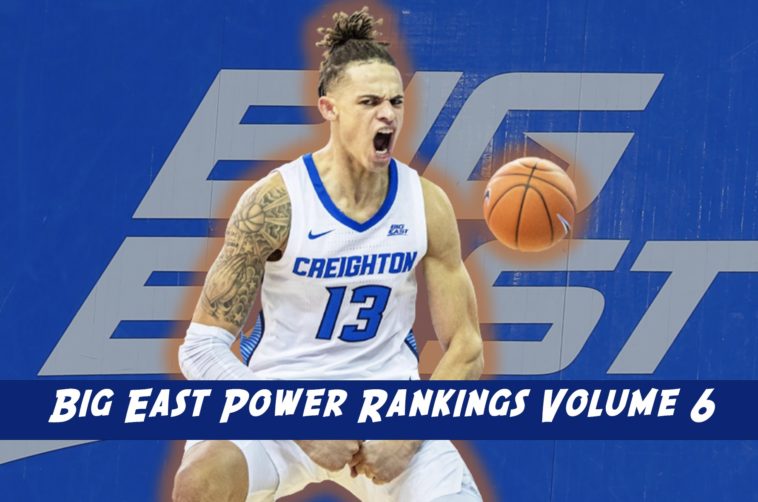 A week after handing Villanova its first conference loss on the season, St. John’s choked at Hinkle Fieldhouse in overtime. They’re not the first team riding an impressive win streak to fall to the same fate – Creighton also suffered a head-scratching loss in Indianapolis. Also similar to St. John’s, the Jays downed Villanova at home. Creighton shot lights out from long-range in a game that was at least tangentially similar to the game from the team’s first year in the new Big East that saw Ethan Wragge explode.

Providence followed up a frustrating previous week by notching two important wins: first over UConn and then at DePaul. The Friars are on the outside looking in, but an NCAA Tournament berth isn’t yet out of the question. Elsewhere, Xavier returned to action after long last and the conference’s fourth through ninth ranked teams continue to cannibalize each other. There may not be as many Big East teams in the Big Dance as in years past, but the conference remains competitive as ever, which is a real treat for us fans.

This is the first time Villanova falls from number one in our rankings this season. Coach Mac’s Bluejays got hot last year around this time as well. They first avenged a home loss in a gritty 63-48 win at Georgetown on Tuesday before putting on a clinic back at CHI Health Center Omaha en route to an 86-70 victory over #5 Villanova. At least a share of the Big East regular season title is still in play for the Jays. If they want to continue their yearly tradition of finishing ahead of where they’re slotted in the league’s preseason rankings they’ll likely have to win out, which isn’t completely out of the question.

CU played well enough this past week to make which couple players to choose for our POW honors relatively difficult. Christian Bishop shot 77.8% from the field and averaged 16.5 points, 9.5 boards, 2 blocks, and 1.5 steals being matched up against the gargantuan Qudus Wahab and conference POY front-runner Jeremiah Robinson-Earl. Mitch Ballock is thankfully continuing to seek out shots, and they’re falling more often than not. When he’s even slightly aggressive on the offensive end Creighton is a scary team to have to defend. Andy Katz named Marcus Zegarowski his national player of the week after Z’s 25-point, 5-assist effort as he led the Bluejays to their most impressive win to date. Damien Jefferson remains as steady as ever – he scored in double figures in both games last week and notched a double-double against Villanova. Dare I say it, but the Jays are, in fact, rolling.

Now they face a heck of a layoff, which isn’t necessarily a good thing after finding such great offensive rhythm. Creighton is off this week before hosting DePaul on February 24th.

The Wildcats got off to a scalding start last week by absolutely demolishing Marquette. All five Villanova starters scored in double-figures, paced by 27 from Jeremiah Robinson-Earl. The Wildcats shot an astounding 63% from the field, assisted on 25 of 34 made baskets, and hit 13 threes –  shooting nearly 60% from deep. How’d they follow it up? By giving up nearly as impressive of an offensive effort to Creighton on Saturday afternoon in the FOX game of the week. Collin Gillespie let Marcus Zegarowski outplay him, full stop. Something tells me that Villanova won’t lose by 16 again this season, no matter how their year ends up.

I would hate to be UConn after Jay Wright & Company have the entire week to prepare ahead of Saturday’s tip.

It wasn’t pretty, but the Hall won a rock fight in their only action of the week Sunday against Marquette. “Survive and Advance” was the key to Sunday’s ugly Valentine’s Day win for the Pirates. It was their 6th straight win over the Golden Eagles and fell into the “can’t lose” category as The Hall is firmly on the bubble. On a night when their star didn’t have it, Jared Rhoden, a player many expected to take a big leap this year cashed in with 20 points. Defense first is how Seton Hall needs to play and while they currently boast a Top-20 offense according to KenPom, the defense has led the way in their resurgence following their January swoon.

Another week to pad the record with DePaul coming to town on Wednesday before a weekend trip to DC to play a streaky Georgetown team.

The Friars slingshotted themselves back to fourth in our rankings by virtue of being the only team besides Creighton (who they split with earlier this season) to pick up two wins on the week. The win over UConn was impressive, the win over DePaul was expected. David Duke has returned nicely to form with consecutive 17-point showings last week. Providence held DePaul to a Tony in the second half in Chicago. Sub-20 point halves have been few and far between this season, so even when they come against the league’s doormat they’re worth celebrating.

Ed Cooley returns to the sideline after recovering from an undisclosed illness as his team attempts to complete the season sweep of UConn on Tuesday in their only action of the week.

We’ll echo B-Frank’s thoughts from last time around after the Huskies went 1-1 last week: all things considered, UConn has done a bang-up job without their best player. If UConn can continue to defend at this level when James Bouknight returns from injury they will be a tough team to contend with. Solid guard play is of the utmost importance as the season winds down, and the three-headed monster of Bouknight, RJ Cole, and Tyrese Martin is as deep and formidable as backcourts come.

The Huskies rebounded from a loss at Providence to pick up a crucial road win in Xavier’s return to action. They get another shot at Providence this evening before traveling to play at Villanova on Saturday. Dan Hurley and company are again hoping for a 1-1 week.

After three consecutive postponements due to COVID protocols, Xavier returned to the floor this weekend for the first time since January 30th. They failed to defend home court at the Cintas Center against a scrappy and undermanned UConn squad. Zach Freemantle exploded for as impressive of a stat-line as we’ll see all season – 30 points and 15 boards – but he didn’t get much offensive help outside of 14 points from Nate Johnson. Travis Steele’s team wasn’t incredibly crisp defensively, but not playing in two weeks can do that to a team.

The Musketeers have played as few games as any team not named DePaul in the conference. The difference is that X could actually make a case for a postseason bid. They’ll have to make up as many games as they can if they’d like to have a shot at making the NCAA Tournament. They travel to play a St. John’s team looking to bounce back after dropping a game they should’ve won at Butler before returning home to host that same Butler team on Sunday.

The Johnnies impressive run came to an end in disappointing fashion Tuesday night in Indianapolis. The Red Storm coughed up an eight-point halftime lead and mustered just five points in the extra period to fall to a Butler team that is just playing spoiler at this point. St. John’s shooting woes from long-range returned at exactly the wrong time as they shot a mere 4-of-17 from distance on the night. Julian Champagnie led the way with 19 points and 8 rebounds and played nearly the entire game. Isaih Moore provided a nice scoring spark off the bench, but Posh Alexander returned to earth, as freshmen do. Mike Anderson will preach rebounding this week in practice as the Johnnies handily lost the battle of the boards to a not incredibly beefy Butler front line.

St. John’s looks to get off the schneid as they host Xavier and DePaul this week in Queens.

Georgetown went 1-1 on the week, just as they did previously. The Hoyas failed to complete what would’ve been an impressive season sweep by losing at home to Creighton before beating Butler over the weekend. Managing just 48 points offensively won’t win you many games, especially when matched up against one of the more high-powered offenses in the league. Jamorko Pickett played incredibly well, registering 16 points and 12 rebounds, but none of his teammates scored more than 8 points. Georgetown mustered 30 more points against a battered Butler bunch over the weekend. The Hoyas shot over 50% from the field, 11-of-22 from beyond the arc, and nearly flawlessly from the charity stripe. They committed an astounding 23 turnovers, but still managed to win by 15 in large part to nearly doubling the Bulldogs’ rebounding effort in a game that saw five Hoyas score in double-figures.

You’d have to think Patrick Ewing is totally fine with .500 basketball from here on out. The Hoyas face a tough test as Seton Hall comes to town on Saturday.

In a similar vein, LaVall Jordan has to be happy with a 1-1 week especially considering St. John’s was one of the hottest teams in all the land when they arrived at Hinkle Fieldhouse for Tuesday night’s tip. Another home win against a team riding a hot streak – first CU now the Johnnies. The resilience of this Butler team cannot be understated. St. John’s was running away with the ball-game in the first half behind multiple thunderous dunks from Isaih Moore and somehow someway the Bulldogs cut the deficit to single digits and found the offense, and more importantly, the defense when it was needed.

They’ve got a similar chance to split the week as reeling Marquette comes to town before the Bulldogs travel to Cincinnati on Sunday.

They just keep losing. Blowout loss to Nova before dropping a close-ish sloppy contest to Seton Hall – though both were on the road. Marquette cannot seem to solve the Pirates even on bad nights as they have now dropped six in a row to Seton Hall. Since their win at St. John’s, the Golden Eagles have dropped 6 of their last 7. There is a bit of a silver lining here in that, all but the Villanova loss were single digits and most by two possessions or less. The problem is Marquette had a pair of Top-10 wins on their resume and basically just had to play decent basketball to make the Tournament. That ship has sailed with just four games left on their schedule.

Marquette’s only action of the week is a Wednesday night trip to Hinkle.

DePaul’s offense continues to sputter. They only managed 47 points in their only action of the week against a Providence team that isn’t as defensively stout as is tradition. The Blue Demons couldn’t exorcise their scoring troubles and limped across the finish line with just 19 points in the second half at home. It doesn’t get any easier for the Dave Leitao’s guys with road games at Seton Hall and St. John’s this week.